You could call Michael Brooks a supplement junkie. He pops exactly six pills a day, three times a day, not to mention powders and shakes and chews. “A multivitamin, vitamin C, omega-3s, alpha lipoic acid,” he says. “I’m taking a digestive enzyme.” 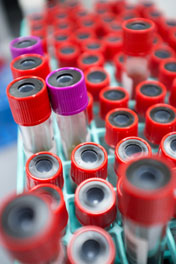 Brooks is a personal trainer in Birmingham, Ala. He’s healthy and fit, but he almost obsessively wants to know more, which is why we find him here, a few doors down from a sandwich shop and a nail salon, at a storefront lab called Any Lab Test Now.

When you get your cholesterol or blood sugar checked, chances are your doctor ordered the tests. But as insurance companies pass along more of the cost of lab work onto the consumer, retail lab owners are seeing a niche. But there are some concerns.

Brooks is having a micronutrient test done to tell him where he’s deficient. The test costs $399, but Brooks figures his nutritional supplements aren’t cheap either.

“So even though there’s a cost to this test, I feel like if I can maybe find a few things I don’t need to be taking, so in the long run I’ll save money,” he says.

Labs where folks can just walk in and order tests on themselves are popping up in retail centers across the country. Any Lab Test Now, for example, has 100 stores in almost three dozen states. And the company says it’s opening five new labs a month. And there are at least three other national chains that are expanding.

At Any Lab Test Now, co-owner Anthony Richey pulls out a long sheet of paper with all the different tests his lab offers. There’s everything from an HIV screening to a “fatigue” panel. It looks like a sushi menu.

“You say, ‘Well I want to check my diabetes, I want to get a hemoglobin A1C, and maybe I’ll check my lipid panel. And I’m a male over 40 so I’ll get my PSA checked,’ ” Richey says.

But why would anyone walk in and have these tests done on their own? Richey says it’s convenient: there’s no hospital parking, no wait time and no co-pay. And some people just want their results confidential.

Franchises like this one send the tests off to a lab, so the storefront lab is like a middleman, with a little extra tacked onto the cost of the test to make a profit. At Any Lab Test Now, a doctor reviews the results, but won’t give medical advice beyond “see your own physician.”

Control Over Healthcare, Or Unnecessary Testing?

“It’s another way for people to take control of their own health and monitor stuff that they feel is important to monitor without always having to have a doctor involved,” Hein says.

And that’s what is dangerous, says Michael Wilkes, professor of medicine at the University of California, Davis. He says false alarms come with the turf.

“If you order enough tests, something will eventually come back positive,” Wilkes says. And without a doctor’s input, he says, that can send someone into a panic. What’s more, ordering tests can drive up health care costs. That’s because a positive result, Wilkes says, is usually followed by a doctor’s visit.

“And now a doctor most likely has to repeat the test. And then there’s a whole list of cascade of new tests to confirm or go against what the tests show,” he says.

But the main issue, critics say, is that lab franchises are in the business of selling tests — tests that doctors might never have ordered — based on profit.

“From a marketing standpoint it’s a good position to be in where you create a service, create a demand,” says Rodney Forsman, president of the Clinical Laboratory Management Association. “It becomes a consumable like Starbucks or bottled water.”

Forsman says he worries about the motives of those turning medical tests into a commodity. But as insurance companies ask patients to swallow a bigger chunk of lab costs, the lab franchise industry could grow even more in the coming years.