JUPITER, Fla. — No place in Florida has recorded more deaths from COVID-19 than Palm Beach County, the tropical vacation and retirement destination that bills itself — chutzpah notwithstanding — as “The Best of Everything.”

As of Wednesday afternoon, 69 people in the South Florida county of 1.5 million had died after being infected with the novel coronavirus. The death toll outpaces the state’s two more populated counties, including Miami-Dade, which has nearly twice the population and 49 deaths.

Health experts attribute the county’s high mortality rate to three factors: a large elder population, with 1 in 4 residents 65 or over; its lack of available testing, particularly compared with its southern neighbors, Broward and Miami-Dade counties; and frequent travel among residents and visitors to and from the New York metro area, the national epicenter of the outbreak.

Dr. Larry Bush, an infectious disease specialist in the county, said that, despite the risks to older residents and the paucity of testing, seniors can protect themselves.

“There is a lot of anxiety out there,” Bush said. His advice: “Stay away from everybody, and if you don’t have to be out, go home.”

About 6,700 people have been tested in Palm Beach County, fewer than one-fourth of Miami-Dade’s tally and one-third that of Broward. Of the 69 deaths, 64 were people over 65, including 49 over 80.

The average age of residents with confirmed cases in Palm Beach County is 57, compared with 49 in both Miami-Dade and Broward.

Drive-thru testing sites in Palm Beach County have had overwhelming demand and turned away thousands of residents seeking appointments because health officials did not have enough tests.

Fear of the virus is sending a shudder through this affluent county about an hour’s drive from Miami that has attracted Northerners since the railroad arrived in the 1890s.

Although Palm Beach is Florida’s top agricultural county — leading the nation in sugar and sweet corn — it is better known for its gated retirement communities, golf courses and many oceanfront resort hotels catering to millions of annual visitors. It’s also home to President Donald Trump’s palatial home and club, Mar-a-Lago. Tourists seeking sun on the beaches or a glimpse of the old-money mansions that line a part of the coastline are nearly extinct now (though some seasonal residents haven’t headed home yet).

For residents, the changes brought on by COVID-19, the disease caused by the coronavirus, are disconcerting. Retirees drawn to the warm climate (and zero state income tax) said the past weeks have felt more like an odd vacation than their usual lifestyle — and they don’t know when it will be over.

Many of the Palm Beach deaths were of people from the southern part of the county, including three in the upscale Polo Club of Boca Raton, a gated community where many retirees enjoy five full-service restaurants, two golf courses, a fitness center and card rooms that host poker and bridge games daily.

Jerry Levy, 87, a 20-year resident of the Polo Club with wife Thelma, said the outbreak and Gov. Ron DeSantis’ order for people to stay home have disrupted his lifestyle, which most days used to include tennis, poker and often dinner with friends.

“Mentally, people are breaking down,” said Thelma, 88. “Two weeks was fine, but it’s hard to accept that this is how it’s going to be for a while. And people are getting cranky.” 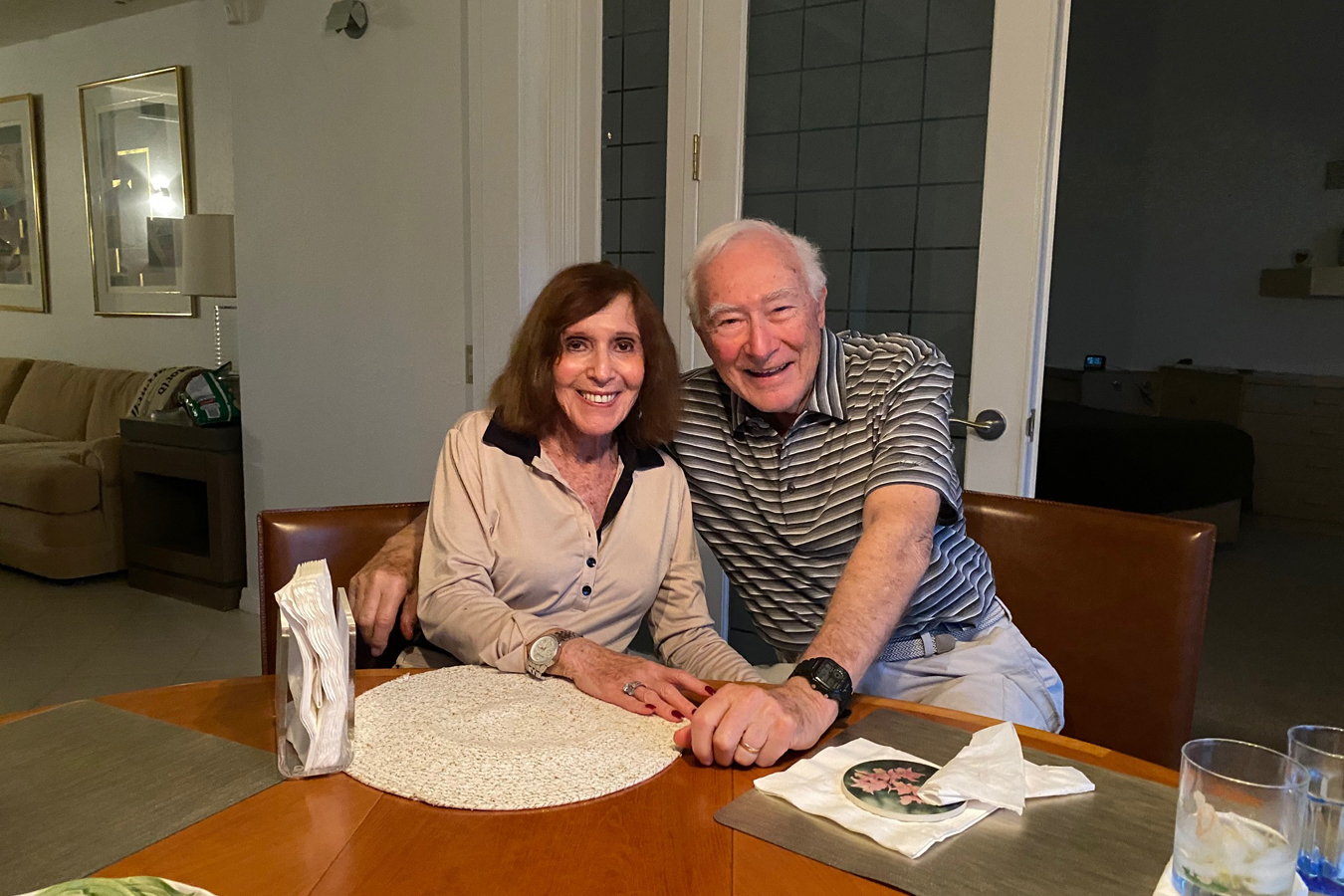 Jerry and Thelma Levy, residents of the Polo Club of Boca Raton, Florida, say they are having to give up many of their usual activities to stay safe from the coronavirus outbreak, which has hit their community hard. “It’s hard to accept that this is how it’s going to be for a while,” Thelma Levy says.(Courtesy of Jerry and Thelma Levy)

The Levys pass most days reading, walking in their community of 3,000 people, watching movies on television and videoconferencing with friends and family. They still go to grocery stores but are now wearing gloves and face coverings.  When their housekeeper visited last week, they gave her a mask and gloves before she started working.

At Century Village, a large retirement community in West Palm Beach, residents are adjusting gradually to their new lifestyles. “We are bored, anxious and would love to have an indication when this will be over,” said Bobbi Levin, 80, who works on several social committees at her condo complex.

“It feels like we are on a forced vacation,” said Levin, who moved from New York 20 years ago. “I do crossword puzzles and catch up with Netflix.”

Lately, Levin said, she stays home and waves to people from a distance while standing in the outdoor hallway. It helps having her sister next door.

Dr. Joseph Ouslander, a professor of geriatric medicine at Florida Atlantic University in Boca Raton, said he worries about many seniors in the county who live alone and cut off from others.

“We see so many vulnerable people who are living on the edge by themselves and do not have any close family in the area, and they are not able to get the things they need,” he said.

Ouslander, who works at a medical clinic serving several retirement communities and nursing homes, recommends that seniors do anything they can to stay active — even walking around their house or neighborhood — as well as use social media to reach out to friends and family.

Dr. Joel Rosenberg, a retired heart doctor who lives at the Polo Club in Boca Raton, has played “amateur disease detective” in recent weeks talking to many of the 20 residents who have tested positive and are still at home. He said all three deaths were of people with underlying lung or heart disease. Most of the rest have already recovered.

Many who were infected had either traveled recently to New York or been in close contact with people from there, he said.

No one is inviting guests into their homes anymore. It’s becoming common to see people holding happy hours in their driveways, with one resident sitting in each corner at least 15 to 20 feet away from the others.

“Humans are social animals, so it’s hard not to be social,” Rosenberg said.