Many of Ron Fleming’s fellow soldiers have spent the past five decades trying to forget what they saw — and did — in Vietnam.

But Fleming, now 74, has spent most of that time trying to hold on to it. He’s never been as proud as he was when he was 21.

Fleming was a door gunner in the war, hanging out of a helicopter on a strap with a machine gun in his hands. He fought in the Tet Offensive of 1968, sometimes for 40 hours straight, firing 6,000 rounds a minute. But he never gave much thought to catching a bullet himself.

“At 21, you’re bulletproof,” he said, as he sat on the edge of his hospital bed at the San Francisco VA Medical Center. “Dying wasn’t on the agenda.”

Now it is. Fleming has congestive heart failure and arthritis, and his asthma attacks often land him in the hospital. Ten years ago, he was diagnosed with post-traumatic stress disorder (PTSD), which makes him quick to anger and hypervigilant, as if he’s still in that helicopter.

Fleming’s physical and mental health symptoms, combined with his military history, are a challenge to the VA’s palliative care team, which is coordinating his care as his health deteriorates. It is a challenge they are facing more often as Vietnam veterans age and develop life-threatening illnesses.

For some veterans, the stoicism they honed on the battlefield often returns full-force as they confront a new battlefront in the hospital, making them less willing to admit they are afraid or in pain, and less willing to accept treatment. Other vets, with PTSD, are even more reluctant to take pain-relieving opioids because the drugs can actually make their symptoms worse, triggering frightening flashbacks.

About 30 percent of Vietnam vets have had PTSD in their lifetime, the highest rate among veteran groups, according to the U.S. Department of Veterans Affairs’ National Center for PTSD. Their rate is higher because of the unique combat conditions they faced and the negative reception many of them received when they returned home, according to numerous studies.

Since the war, many vets have developed coping strategies to keep disturbing memories and other PTSD symptoms at bay. But facing a terminal illness — the severe pain of cancer, the nausea of chemotherapy or the breathlessness of heart failure — can drain their energy so much that they’re unable to maintain their mental defenses. Vets previously diagnosed with PTSD can slip out of remission, and some may experience it for the first time.

“They’re so distracted trying to cope with their physical symptoms that they might have flashbacks,” said VJ Periyakoil, a palliative care physician at the VA Palo Alto Health Care Center and director of palliative care education at Stanford University. “War memories start coming back; they start having nightmares.”

Gasping for breath can induce panic for anyone, but it can make vets feel as threatened as they did in a combat zone, said Eric Widera, director of hospice and palliative care at the San Francisco VA and professor of geriatrics at the University of California-San Francisco.

That’s what happens to navy vet Earl Borges, who logged 240 24-hour river patrols in Vietnam with three other men on a plastic boat, constantly looking for enemy soldiers in the brush.

Since then, he’s been startled by loud noises and fast-moving shadows. Now, at age 70, Borges has amyotrophic lateral sclerosis (ALS) and chronic obstructive pulmonary disease, or COPD, which can intensify the anxiety from his PTSD.

If he lies down without his breathing machine, he panics, then hyperventilates. 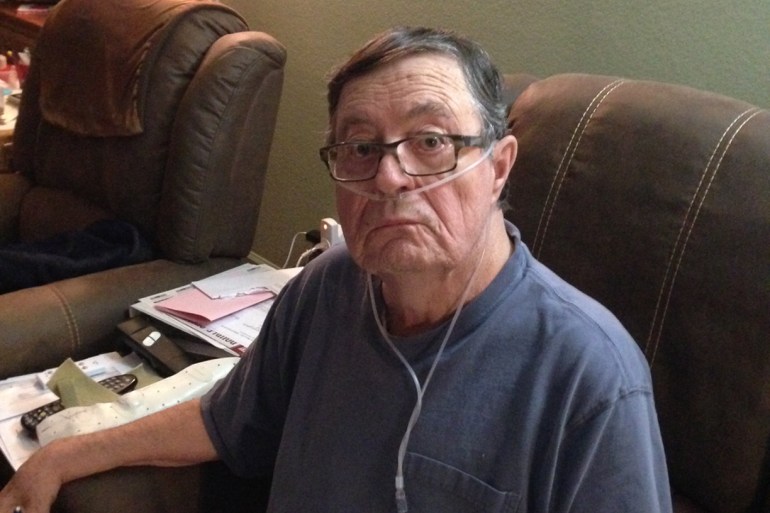 Earl Borges conducted river patrols in Vietnam. Now 70, the symptoms from his amyotrophic lateral sclerosis and chronic obstructive pulmonary disease can intensify the anxiety he experiences as a result of PTSD. (Courtesy of Shirley Borges) 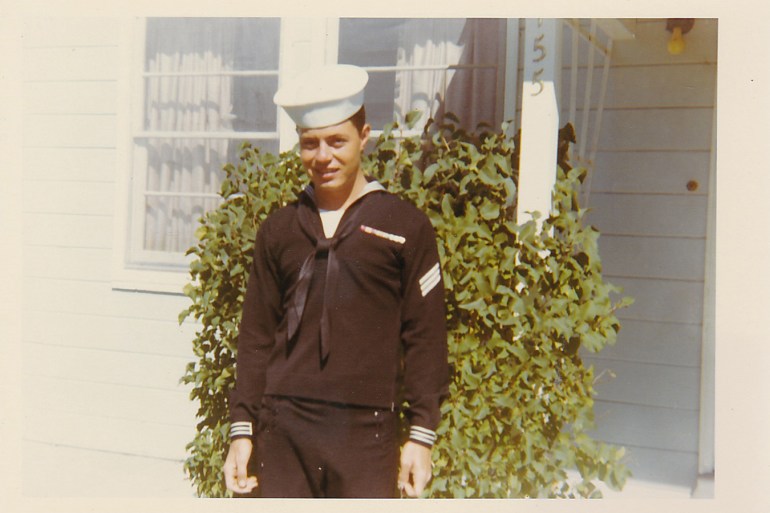 Borges in 1967 before deploying for service on a guided missile destroyer that conducted missions off the coast of Vietnam. The following year, he served on a boat patrolling Vietnamese rivers. (Courtesy of Shirley Borges)

They both say Earl’s PTSD is under control — as long as he doesn’t talk about the war — and his ALS is progressing very slowly, without pain.

But for patients who are in severe pain, the go-to treatment is opioids, which can also make PTSD symptoms worse. This forces vets to choose between physical pain and mental anguish.

“Oftentimes, pain medications like morphine or oxycodone make some people feel a little bit fuzzy,” Widera said. “That may contribute to that feeling of loss of control.”

“‘Don’t you try and give me none of those narc pills, doc,’” she recalled one of her patients saying while he grimaced in pain.

Some vets also refuse medication because they feel as if they deserve the pain.

“We see a lot of feelings of guilt over what they’ve seen and done during their experience in Vietnam,” Widera said, “and they don’t want to blunt that.”

At the end of life, this sense of guilt is amplified as vets look back and review their lives and, perhaps, contemplate the consequences of their actions in the line of duty. This is even true for vets like Fleming, whose overriding feeling about his service is pride.

“Sometimes I think that now I’m being paid back for all the men I killed. And I killed a lot of them,” said Fleming, who has not required opioids for his condition, but has declined other medications.

“If there is a judge, I figure I’m going to hell in a handbasket,” he said.

Watching vets choose to endure their pain can be hard for families, as well as for palliative care doctors and nurses. Just like soldiers, doctors hate doing nothing.

“Staff suffer terribly because they feel like, ‘What good are the hospice experts if we can’t take care of patients’ pain?’” Periyakoil said.

Often, the only thing they can do is stand back and respect the vets’ choice to bear their pain, she said.

Once, when Periyakoil was dressing the ulcer wounds of the patient who refused “narc pills,” he began talking about the war. She didn’t press, just kept working quietly on the wounds. As he stared at the ceiling, wincing, he confided in her about a time he was forced to kill a pregnant teenager.

But this kind of revelation is unusual. With weeks or months left to live, after a lifetime of silence about their most horrifying memories, there often isn’t enough time for vets to talk about them at all.

That’s one reason the VA has been trying to start end-of-life care earlier — to address vets’ moral distress or PTSD years before they land in hospice, Widera said.

Fleming’s doctors, for instance, have urged him to consider mental health counseling or antidepressants. He refuses.

The emotional pain connects Fleming to his past.

He was awarded 18 Air Medals for meritorious acts and heroism in flight. The loss and grief he experienced in Vietnam are woven into those memories of victory and glory.

“You see all the combat. There’s a charge to it,” he said. “And after a while, it bites you right in the ass. And once you’ve been bit, you’re bit for life. Nothing else works.”

This story is part of a partnership that includes KQED, NPR and Kaiser Health News, an editorially independent program of the Kaiser Family Foundation.