After 10 years, the campus garden within the Fort Belknap reservation in northern Montana now holds more than 60 species that take up almost 30,000 square feet. Morales adds new plants annually. This year, she is testing Oregon grape root and breadroot.

Such plants have been used as medicines for generations by the Assiniboine and Gros Ventre tribes who live on the reservation. Echinacea is used to help boost the immune system. Valerian produces a strong sedative that can address nervousness, tension and stress. Licorice root acts as an antihistamine, which treats allergy symptoms. 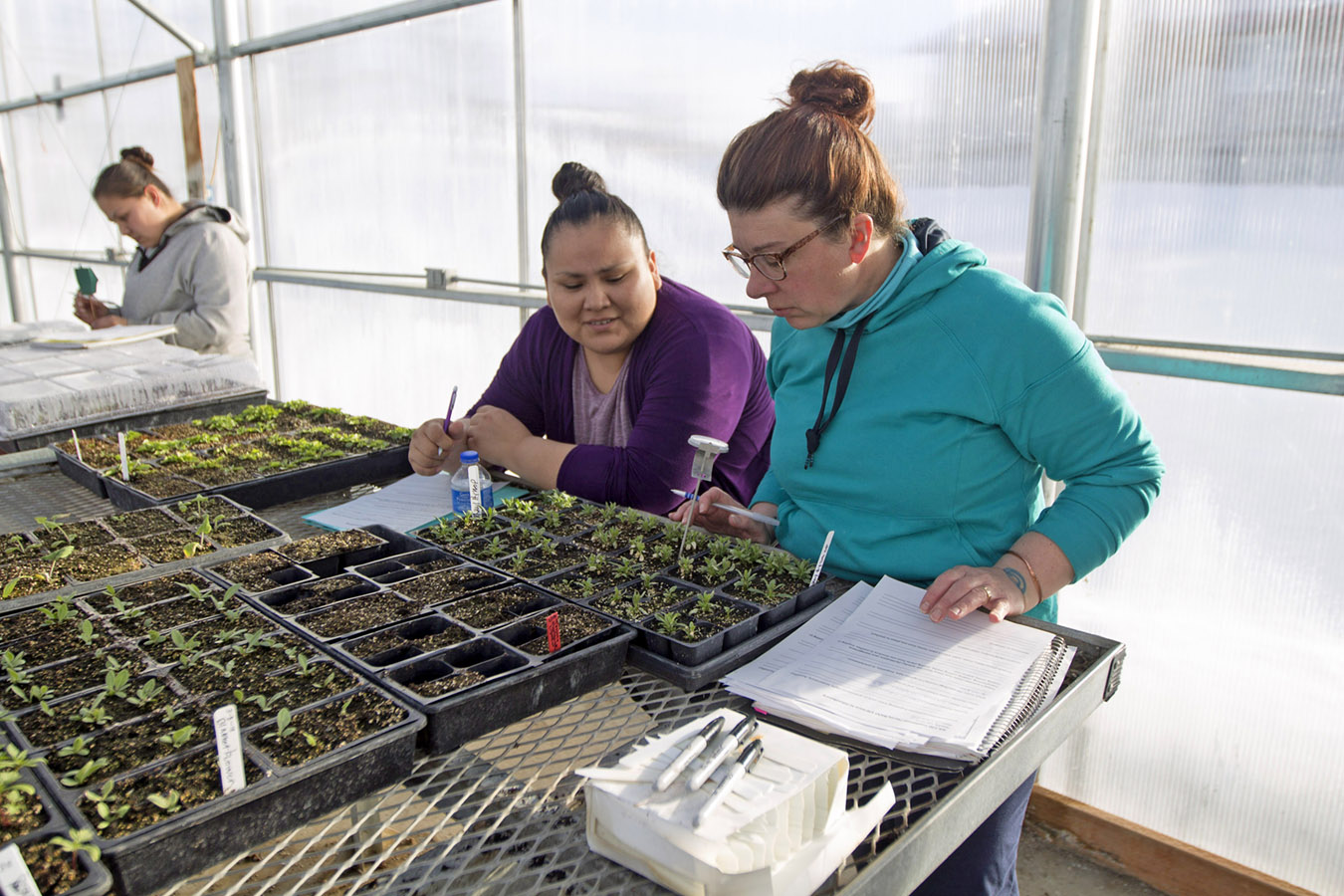 Like many people in the Fort Belknap community, Morales, 60, is working to teach herself and others the traditional Indigenous health knowledge that was largely lost because of federal policies.

“Our ancestors, did they know they were scientists? No. They were just taking care of their body, taking care of their people,” said Morales, who teaches ethnobotany at the college. “All this knowledge, they knew it. They handed it down, and for years and centuries. We took it for granted. And here we are trying to teach ourselves, trying to learn.”

Now the Indian Health Service, a federally funded and treaty-promised health care service, is also starting to embrace such knowledge. The Fort Belknap IHS hospital is seeking job applicants for two traditional practitioner positions, offering up to $68,000 a year. While the health service has filled similar positions across the Navajo Nation in the past 15 years, these would be the first IHS positions of their kind in Montana.

The move is surprising because the federal government would essentially be paying for medicine men, or women, to help treat IHS patients, despite punishing and maligning such expertise for generations.

But, perhaps in a sign of how much trust needs to be rebuilt and knowledge regained, the IHS has yet to fill either position, despite posting the listings twice since late 2019.

Still, the job announcement itself is causing ripples elsewhere in the state.

D’Shane Barnett, executive director of the Missoula Urban Indian Health Center, said he was able to use the Fort Belknap job listing to create a similar position. The center, which receives funding from IHS but is run independently, created a job description for a part-time traditional healer in late March.

Traditional healers at an IHS hospital or an urban Indian clinic could work with illnesses or problems that affect the community in a way that Western-based clinicians might not, Barnett said. Diseases like diabetes and heart disease, as well as problems like domestic violence, require lifestyle changes, not only a clinical solution, he said.

Yet the two IHS traditional healers would need to fill many roles to help with physical, mental, emotional and spiritual needs of the Fort Belknap community of 7,000 enrolled tribal members. They would educate hospital workers about traditional health practices and cultural sensitivity, connect patients with resources, and use traditional native diagnostic and treatment procedures like ceremonies, blessings and sweats.

“As an advocate and liaison between patients and providers, their work will enhance communication and understanding of the culture and lifeways of the local community,” IHS spokesperson Marshall Cohen wrote in an email.

This marks a turnaround from the federal government’s history with traditional tribal practices. In 1883, the commissioner of Indian Affairs set up the Courts of Indian Offenses on reservations across the country. The office regularly issued rules prohibiting religious dances, ceremonies and practices of medicine men until 1921 and continued to enforce them through the 1970s.

At Fort Belknap, many medicine people and spiritual leaders were forced underground to avoid punishment, and many families chose not to teach traditional knowledge to their children. Materials used for religious ceremonies were confiscated, and people were taken to jail and sometimes killed if found to be taking part in any of the activities the commissioner’s office deemed illegal.

It wasn’t until the American Indian Religious Freedom Act in 1978 that the federal government acknowledged the right of American Indian tribes to practice their religions, speak their languages, visit their sacred sites and use their traditional health practices. But the clampdown took a toll on knowledge passed down for generations by the Assiniboine and Gros Ventre tribes at Fort Belknap.

Previously, around 15 spiritual leaders or medicine men or women would have served simultaneously at Fort Belknap, each with specific knowledge, said Minerva Allen, 86, an Assiniboine elder who learned how to use plants from her grandmother. Today, there are four traditional medicine specialists at Fort Belknap; three are Gros Ventre spiritual leaders and one is Assiniboine.

Still, the Fort Belknap tribes have fought hard to hold on to what remains of that knowledge.

“For over 180 years, they’ve been trying to blend us in the melting pot of America and make citizens out of us, but we have held on to our own culture, and we have our own identity,” said John Allen, 67, the Assiniboine spiritual leader with medicinal knowledge, who is also Minerva Allen’s son.

He has treated people with physical, mental and spiritual ailments for over 30 years. Today, he estimated about a quarter of the people living on the reservation use traditional spiritual and health practices.

Morales said having a traditional healer at the hospital would help community members better understand their overall health.

“This would connect them spiritually and reunite that link with our past that has been missing from our culture and traditions,” Morales said.

She knows firsthand about that missing link. Growing up, Morales knew her great-grandmother Melvina Horn was a well-known Assiniboine plant expert, but Morales’ grandparents were afraid that the government would punish their family for learning about cultural and religious traditions or using traditional medicine.

Morales remembers how Horn would pick some peppermint to make tea for her aunt when she was sick with a cold. That was the extent of Morales’ medicinal plant knowledge before she attended a National Science Foundation presentation in 2009 in Washington, D.C., on medicinal plants that grow in the Dakotas. Morales found that many of these plants also grew in Montana.

Today Morales uses herbs in teas and creams for many ailments such as colds, allergies, skin irritations and joint pain. She and her husband are drinking tea with elderberries to boost the immune system during the COVID-19 pandemic. She is also testing combinations of plants such as lemon balm, hops, lavender, rosemary and skullcap to help with anxiety and stress.

She teaches students in the college’s Native American Studies and Allied Health associate degree programs the lost traditional and cultural ways their people used the plants.

“It helps them to understand their people, how they used it, what they used it for, and gives them a better understanding of who they are,” Morales said. “Medicine, plants, it’s part of us.”

She also lets students take home dried plants. One year, a student brought some home to her grandfather. As soon as the student made him some tea, she told Morales, he started to share stories about plants and his family.

“Having that medicinal tea from plants just woke him up, just brought memories flooding back, and she was really happy. She hadn’t seen her grandfather so excited about something,” Morales said. “And this was over a cup of tea.”

This story package was produced by students in the Montana Native News Honors Project, a capstone course at the University of Montana School of Journalism. The complete project is available at http://nativenews.jour.umt.edu.