If you have cancer, chances are your outpatient chemotherapy treatment costs are higher if your oncologist works for a health care system than if she has her own practice, a recent study found.

The study by researchers at the University of Chicago analyzed private health insurance claims data from the Health Care Cost Institute, a nonprofit research organization, and national data about consolidation among doctors and hospitals between 2008 and 2013.

It found significant consolidation between outpatient oncology practices and health care systems in the decade leading up to 2013. The researchers linked that to a rise in spending on drug-based cancer care. Each 1-percentage-point increase in the proportion of medical providers who were affiliated with a hospital or health system was associated with a 34 percent increase in annual average spending per person on outpatient cancer drug treatment, they reported.

Part of the rise was fueled by the facility fees that hospitals and their outpatient clinics routinely add on to the bill, the researchers said.

“Provider consolidation must be changing the ability of providers in a market to extract higher prices [from insurers] for outpatient cancer therapy,” said Rena Conti, an assistant professor at the University of Chicago and lead author of the study, which was published by the Health Care Cost Institute in February. The study controlled for the volume of patients and the mix of cancers, among other things, she noted. 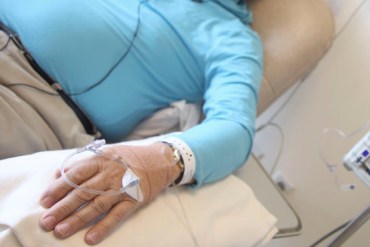 Spending on chemotherapy drugs has been in the news lately as some cancer specialists and patient advocacy groups have strenuously objected to a proposal by Medicare to change how it pays for drugs that are covered under Part B, the program’s outpatient benefit.

This study suggests that for patients, it may be more cost-effective to get chemotherapy treatments at a community-based practice rather than a hospital or hospital-affiliated clinic, Conti said.

“Patients are increasingly shifting toward high-deductible health plans, and that suggests they’re paying a higher percentage of the costs for these therapies as the prices are going up,” she said.

This story was updated to make clear that the study was written by researchers at the University of Chicago.