Catholic and other religious hospitals and universities have been arguing in federal court for much of the past two years that they shouldn’t have to offer or facilitate birth control as part of their employee health plans because it violates their religious beliefs. 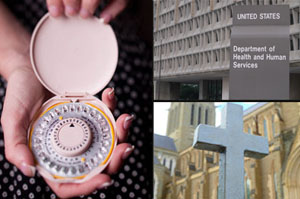 But what happens when the insurance company is itself Catholic? It turns out that Catholic health plans have for years been arranging for outside firms to provide contraceptive coverage to their enrollees.

That’s because such coverage has long been required by state laws or sought by non-religious employers the religious health plans serve.

Now the federal health law requires most health insurance plans, including all new plans in the individual and small group markets, to provide contraceptive coverage at no out-of-pocket cost to women.

That divergence between the Catholic court claim that any link to contraceptive coverage is forbidden and the actions of Catholic insurance plans is likely to draw more attention as more large Catholic hospital systems add insurance plans to their portfolios.

Already a bishop in Arkansas is raising questions about one of the insurers in his state.

No one is keeping track of just how many Catholic health plans are entering the insurance market and selling to non-Catholics. The latest entry is Catholic Health Initiatives, the nation’s fifth largest nonprofit health system, with facilities in 18 states.

Juan Serrano, who heads CHI’s new insurance subsidiary, Prominence Health, said in an interview that over the next year and a half Prominence plans to “expand our health plan footprint into additional Catholic Health Initiative markets…where they make the most sense.”

He said that “as relates to the mandated benefits that are required in the marketplace, we are taking the same position that has been taken by other Catholic health plans, and it is to cede or contract with a third-party administrator who will administer the ERD-related benefits in an arm’s length manner.”

ERD refers to the Ethical and Religious Directives for Catholic Health Care, a document from the Conference of Catholic Bishops that among other things makes contraception off limits for Catholic institutions.

While CHI’s third-party strategy might please health law advocates, the bishop who heads the Diocese of Little Rock, Ark., raised a red flag when the company purchased QualChoice, its first commercial plan in that state, last spring.

“Having given this matter serious thought and prayer, I am not fully convinced by CHI’s reasoning that their acquisition of QualChoice will pose no moral or ethical conflicts,” Bishop Anthony Taylor said in a statement.

“We’re now seeing more and more of these plans moving into the commercial market in a big way,” said Lois Uttley, director of the group. “Under the Affordable Care Act, these plans are supposed to be covering contraception. So they have to figure out some way to get that to their enrollees, despite their religious objections to contraception.”

MergerWatch has been closely watching how Fidelis Care, a Catholic-owned insurer that this year was the second-most popular plan on the New York state health exchange, is handling reproductive health services.

Fidelis has arranged for a third party to provide women’s reproductive health services, although that’s not clear on the plan’s website. In its handbook for healthcare providers Fidelis explains it “has elected not to offer all reproductive and family planning services, including abortion, sterilization, and artificial contraception, as a standard benefit nor to receive premium dollars from the State of New York for such services.”

Instead, the company “will inform these same providers that the New York State of Health Marketplace has approved Unified IPA, LLC to provide New York State of Health marketplace-mandated family planning services, independent of Fidelis Care.” The online marketplace operates under the health law, offering competing plans to people who generally don’t have approved employer-based coverage.

A spokeswoman for Fidelis wrote in an email that health plan members need not worry about getting special access to the outside insurer because “the process is seamless for members. Providers simply bill the outside firm.”

Mike Elliott, a principal with Unified IPA, the outside firm, says he contracts with the same providers Fidelis does, and works with the same pharmacy benefit firms to ensure that prescriptions are filled without Fidelis having to participate.

“From the member’s perspective they’re getting to see the same doctor, they have the same benefit package…and we utilize the same ID number as the health plan,” said Elliott, who says he has been providing reproductive health services to religious health plans for nearly three decades.

With Fidelis, that process has not been exactly seamless, says MergerWatch. Uttley said her group called several health plans asking about contraceptive coverage, and the response from Fidelis “was particularly confusing. The customer service woman said, ‘Well, Fidelis covers contraception if you need it to regulate yourself,’ whatever that means. If you need it for other reasons you have to call this IPA.”

That’s troublesome, said Uttley, because “that’s confusing even to a sophisticated insurance consumer used to having health insurance, and what we have now coming into the marketplace is a lot of people who have never had insurance. It’s enough of a challenge to get them to understand how health insurance works without having this wrinkle in it.”

Another problem for the group is that Fidelis, unlike many other non-religious health plans, refuses to allow Planned Parenthood into its network of covered providers, “not even for prenatal or primary care,” Uttley said. “It’s not clear to us that women enrolling in Fidelis in New York understand they can’t use that coverage at a Planned Parenthood if that’s been their primary source of family planning services in the past.”

In Arkansas, the bishop’s concerns remain unresolved. Taylor sought clarification from the Vatican, and according to diocesan spokesman Dennis Lee, “Bishop Taylor has received a substantive response from the Vatican regarding CHI’s acquisition of QualChoice, and he is actively involved in on-going, private discussions with CHI on how best to comply with the Vatican’s response.”

The issues are clearer to other Catholic health plans that don’t have to meet the needs of non-Catholics in the commercial insurance market. They’re arguing in court that any participation with the contraceptive mandate is forbidden.

The Little Sisters of the Poor religious order, which provides long-term care services with employees insured by Christian Brothers Services, is rejecting the Obama administration’s newest policy: allowing religious employers to notify the government, instead of their insurer, that they have a religious objection to providing contraceptive coverage. “Any provision of the Mandate’s services through the plan…would violate the Christian Brothers’ and Little Sisters’ faith,” the lawyers argue.

In the case of Christian Brothers, the administration argues that because it is itself a religious plan, it is exempt from the requirements anyway.