RED BAY, Ala. — At 72, her gray hair closely shorn, her days occupied by sewing and television, Wanda Chism seems every bit a typical nursing home patient — but for her size.

Chism is severely obese, unable to leave her bed without a mechanical lift and a team of nurses. She has not walked in years. Her life is circumscribed by the walls of her room.

Obesity is redrawing the common imagery of old age: The slight nursing home resident is giving way to the obese senior, hampered by diabetes, disability and other weight-related ailments. Facilities that have long cared for older adults are increasingly overwhelmed — and unprepared — to care for this new group of morbidly heavy patients.

The percentage of those entering American nursing homes who are moderate and severely obese — with a body mass index of 35 or greater — has risen sharply, to nearly 25 percent in 2010 from 14.7 percent in 2000, according to a recent study, and many signs suggest the upward trend is continuing.

But as demand from severely obese patients surges, nursing home administrators say they cannot afford to care for them, because Medicaid, which covers more than 60 percent of all nursing home residents, does not reimburse them for the specialized equipment required: motorized lifts; larger wheelchairs, bedside commodes and shower chairs; and longer intramuscular needles and blood pressure cuffs. The devices are expensive: $10,000 for a mechanical lift, for instance, and $5,000 for an extra-wide bed.

“It’s really not a moneymaker,” said Aundrea Fuller, co-owner of Generations of Red Bay, the private, for-profit facility that cares for Chism in a specially outfitted wing that can accommodate 10 obese patients. Fuller’s decision to open the unit, which frequently has a waiting list, fulfills her personal mission to aid obese people, who are often ostracized and forgotten. But it makes little business sense.

“You’ve got to do it because you have a heart for it,” she said. 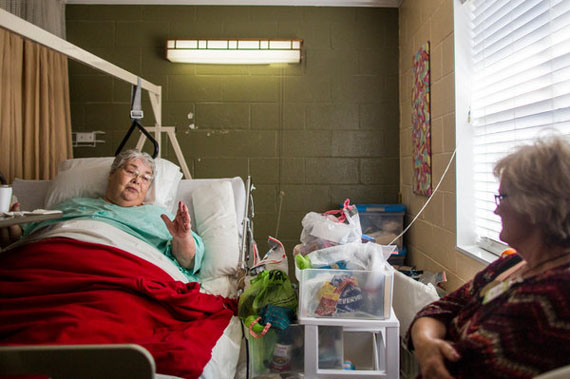 Wanda Chism, left, talking to Pam Bates, an administrator at Generations of Red Bay. Ms. Chism cannot walk on her own, and patients like her need to be repositioned every few hours to avoid dangerous pressure ulcers. (Photo by Joe Buglewicz for The New York Times)

There is no national census of available beds in American nursing homes for those weighing more than 350 pounds, the maximum weight a standard hospital bed can handle. But industry groups and researchers say facilities rarely accept more than a few markedly obese patients.

“One or two places that have tried to do it recognize the economics just don’t work,” said Dr. David Gifford, the senior vice president of quality and regulatory affairs at the American Health Care Association, an industry trade group.

As a result, nursing homes across the country are routinely declining referrals from hospitals seeking to transfer obese patients, creating dilemmas for hospital staff members tasked with safely discharging those ready to leave.

The problem is especially acute in the South, where obesity rates first skyrocketed decades ago and extreme obesity — a 40 B.M.I. and above — continues to rise.

“This is definitely not my grandmother’s elderly population,” said Julie Locher, a medical sociologist at the University of Alabama at Birmingham. “This is a totally different cohort that is aging now.” 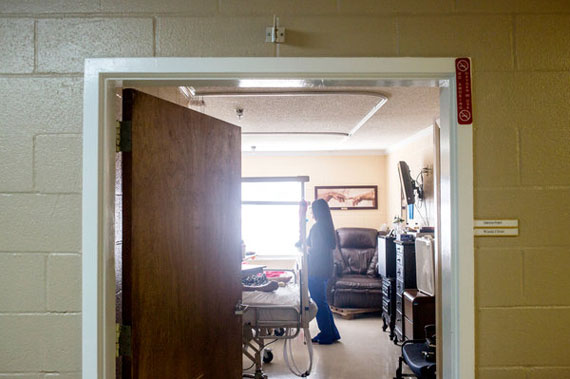 Heather Dooley talking with Ms. Chism. Experts warn that the aging of obese Americans will exacerbate the problem of caring for them. (Photo by Joe Buglewicz for The New York Times)

In neighboring Mississippi, where 29 percent of people 65 and over are obese, nursing homes that accept heavy residents are few and far between, said Sandra Terra, an administrator at the University of Mississippi Medical Center in Jackson. Ninety percent of the nursing facilities her hospital routinely discharges patients to “won’t have anything to do with” obese patients, she said.

The delays are exasperating and commonplace. “It’s not uncommon to make 30 or 40 referrals to finally find a placement,” said Barbara Miller, the director of case management at the University of Arkansas for Medical Sciences, an academic health center with a hospital and clinics in Little Rock.

Whether these routine denials violate antidiscrimination laws is unclear, especially since the degree to which obesity is a legally protected disability remains unsettled. Industry specialists argue the law is unambiguous.

“Nursing homes aren’t required, like emergency rooms, to admit patients, so they have a lot of latitude,” said David Grabowski, a professor of health care policy at Harvard Medical School.

But some experts argue that severely obese patients with significant physical impairments could challenge their denials.

“That’s what the Americans with Disability Act is meant to protect against,” said Eric Carlson, a lawyer for Justice in Aging, a legal advocacy group.

Legal experts say the question is far from settled, but in at least one instance, a severely obese patient who was denied admission to a nursing home filed a discrimination complaint through the federal Office for Civil Rights. To resolve the issue, the nursing home, the GlenShire Nursing and Rehabilitation Center in Illinois, admitted the patient and provided an extra-wide dialysis chair.

The reluctance to accept hospital referrals, especially when physical therapy or wound care is needed, comes down to practical matters: How many staff members will it take to turn the patient? Where is the wound? How long will physical therapy take?

“We ask them, ‘What is the barrier?,’” said Akofa Bonsi-Wallace, the former director of discharge planning at the University of Alabama at Birmingham hospital, who often reached out to nursing homes in Georgia, Florida and Tennessee. “Most of the time it’s staffing. We’ve heard, ‘I already have a morbidly obese patient, and they are eating away at my staffing hours.’”

But it’s not only the size of nursing home patients that is changing. 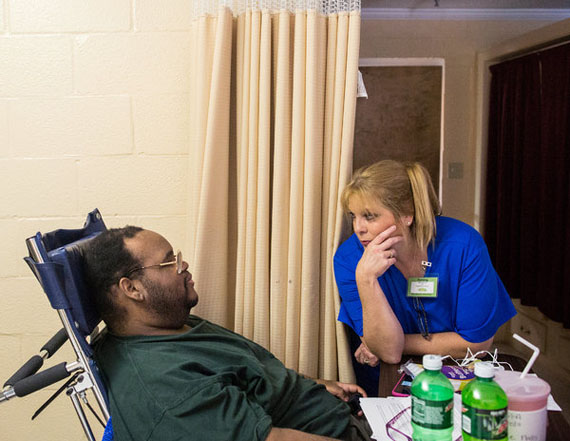 Lee Nalls talking with Kathy McCurry, a nurse. Medicaid does not reimburse nursing homes for the specialized equipment needed to care for severely obese patients. (Photo by Joe Buglewicz for The New York Times)

Nursing home administrators say some of their extremely obese residents are young adults or middle-aged men and women stricken by congestive heart failure, stroke or facing complications from surgery or an accident. They can’t return home or to an assisted living facility because the requirements to safely care for them are too great.

Lee Nalls, 28, awoke during the night at his mother’s house in North Port, Alabama and noticed his face felt weak. As he made his way to the bathroom, he fell and remembers hearing his mother call the paramedics. A diabetic and severely obese since childhood, Nalls had suffered a stroke that left his right side paralyzed.

“I can barely move,” he said, his speech slurred and his eyes listless.

With a lunch tray of beef enchiladas and salsa salad in front of him, Nalls slouched in a wheelchair in his room at Generations of Red Bay in Alabama. Like his fellow residents in the special unit for obese residents, Nalls opts to eat alone instead of the cafeteria.

“I’m not really comfortable around other people,” Nalls said, his Southern politesse unhardened by the gravity of his situation. His classmates in grade school ridiculed him about his weight: “Kids would stick notes on my back pack as I walked past, and it made me feel sad,” he recalled. Coming under the gaze of other residents is “just something I don’t want to deal with.”

After lunch, a nurse rolls a mechanical lift into Nalls’ room. Four aides gently slide a sling underneath him and lift him into bed in a well-rehearsed routine.

At the Generations of Red Bay facility, nurses reposition obese residents like Nalls, who are unable to move on their own, every few hours to avoid dangerous pressure ulcers. Daily personal needs require monumental coordination. One nurse can help a resident of normal weight dress and sit in a chair within 15 minutes, said Kathy McCurry, head treatment nurse. “With a bariatric patient, that takes an hour with two certified nursing assistants.”

There are other reasons nursing homes are wary, including the inability to transport such patients to the emergency room, the possibility of staff injuries and higher workers’ compensation costs, and the infeasibility of remodeling older buildings with wider door frames and special plumbing to accommodate sturdier toilets.

The paucity of available beds has meant heavy patients can languish in hospitals, at great expense to Medicare, private insurance companies and the hospitals.

“We’ve had patients in the hospital for several months,” said Dr. Lynn Crawford, the medical director of the University of Alabama at Birmingham Hospital-Highlands geriatrics unit — an observation echoed by other hospitals and national industry groups.

Martin Bayne, 65, who has Parkinson’s disease and weighs 370 pounds, found himself stuck in a hospital in Pennsylvania after episodes of congestive heart failure and the flu. “It was hell for me,” he said, lamenting the helplessness and humiliation he felt awaiting placement in a skilled nursing facility.

“There’s a terrible feeling that goes along with knowing that you’re not wanted,” said Bayne, an advocate and blogger on issues of aging. He now lives in a personal care home in Center Valley, Pa.

Patients can end up in nursing homes hours away, and across state lines, from their families, compounding a difficult period of their lives. “They are already ill and feeling compromised,” Terra said. “But at some point, we have to say, ‘It has to do with your weight. I can’t find a place for you to go.’”

By 2040, more than 82 million people will be 65 and over, twice as many as in 2000. Adult obesity has continued to increase — 38 percent of Americans 60 and older are obese — and one in 20 adults are considered extremely obese.

As tens of millions of these obese Americans age, Crawford said, “it’s going to be exponentially worse.”

Hospitals have become increasingly inventive, with some offering donations of specialized beds, mattresses and lifts to nursing homes considering admission of an obese patient. “We step in to try to help with that transition,” Bonsi-Wallace said.

The prospect of losing weight is neither realistic nor advisable for these patients, doctors say.

“The expectation has been that we’re going to get them back up on their feet and get them home again,” said Phillips of LeadingAge. “But there is a group of them that is not going to happen. And losing weight at this point in their life is not a viable option.”

Indeed, weight loss can be dangerous for obese patients who, despite their size, lose muscle mass and can become frail, placing them at risk for fractures.

For Wanda Chism, her golden years have played out far differently than she imagined. “I always pictured my retirement: I wanted a tricycle and be on my way.”

Instead, she seems resigned that she will be in her small room and oversize bed at the obesity wing at Generations of Red Bay until the end.

She surveyed the odds and ends of fabric spilling out of her plastic sewing bins and the call buzzer and TV remote she uses to summon the outside world.