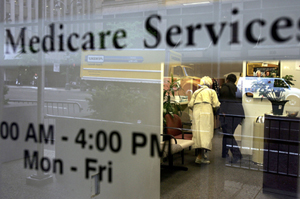 Neither Democrats nor Republicans support allowing a 25 percent pay cut for doctors who see Medicare patients, but unless they act, that’s just what will happen on Jan. 1. (Getty Images/File Photo)

By now it should be getting familiar. Unless lawmakers act before Jan. 1, Medicare payments to doctors will be cut by 25 percent.

It’s the fifth time this year Congress has been faced with this same situation. Twice – in April and again in June – lawmakers missed deadlines and had to rescind cuts retroactively.

Neither Republicans nor Democrats support the cuts – which are so large many predict they would result in doctors’ dropping Medicare patients. But so far no one has figured out how to come up with the $300 billion or so it would cost to fix the problem, or agreed to add it to the nation’s burgeoning budget deficit.

Tricia Neuman, vice president of the Kaiser Family Foundation and head of its Medicare Policy Project, says the problem really dates back to the early 1980s, when Congress first tried to hold down the growing amount it was spending on physician care. The problem was every time Congress tried to reduce prices, physicians simply increased the volume of services they provided.

“Physicians would order more services, ask their patients to come back for more visits, so there would be an overall growth in physician spending,” Neuman said.

That led to Congress’ first attempt to set volume controls in 1989. They didn’t work very well. So in 1997, Congress tried again, with something called the sustainable growth rate formula, or SGR.

From the very beginning, doctors had their doubts. “I knew it was going to be a disaster the whole way along,” said Jack Lewin, CEO of the American College of Cardiology. He says cardiology alone accounts for 43 percent of Medicare costs.

“But Congress always said, ‘We’ll fix it this year.’ And they’ve been saying that since, we’re talking 12 years. And they haven’t,” Lewin says.

One big problem with the SGR formula, according to Lewin and his colleagues, is that it punishes doctors by reducing their Medicare payments for health spending increases they can’t really control. “Because we have so many new technologies, and we have so many more senior citizens who need new hips and joints and heart valves and stents and angioplasties and so forth,” he says.

Other experts say doctors – particularly specialists – are actually doing pretty well under Medicare even if their Medicare pay has been effectively frozen since 2002. That’s because many have managed to find ways to increase the volume of services they provide despite the curbs.

But Lewin says if a cut of the size now being threatened were to actually take effect, it would signal the end of private-practice medicine. Doctors are “going to have to stop seeing Medicare patients and many will have to go to work for somebody else; either a large organization like Kaiser Permanente or a hospital as an employee,” he said.

Neuman of the Kaiser Family Foundation (not affiliated with Kaiser Permanente) says everyone agrees that cuts of the magnitude the formula is now calling for would be devastating. “The problem is … this is a formula that’s cumulative. So each time [Congress] avoids a cut, the next time it comes up for consideration, the cut gets bigger and bigger,” she says.

Which is why a cut that a couple of years ago would have been 10 percent is now up to 25 percent. And as the size of the cut goes up, so does the price tag for fixing the problem.

“You’d be hard pressed to find someone to defend the current formula as it is,” Neuman says. “But the problem is it would literally be billions and billions of dollars to do away with the formula and put something in law in its place. And that’s the dilemma.”

“We have been fighting it vehemently for 12 years,” he says. It was the top issue for the American Medical Association. “They put their whole reputation on the line for it this year. And they got double-crossed.”

Indeed, the AMA agreed to endorse the health overhaul bill only after Democratic leaders in Congress promised they would permanently fix the Medicare pay problem. And a fix bill did pass the House. But it was scuttled in the Senate because it wasn’t paid for.

Which leaves doctors, says Lewin, “begging for a one-year reprieve. And even that’s ridiculous.”

Although compared with a year’s worth of of 30- and 60-day delays, one year might just look pretty good. And it appears doctors might get it. A deal to pay for a 12-month fix by adjusting some penalty amounts in the new health law could come to the Senate floor for a vote as early as Wednesday.