This story comes from our partner Georgia Health News.

ATLANTA—In the small Georgia town of Demorest, Habersham Medical Center, like many rural hospitals, has seen its patient base change in a way that hurts its bottom line.

As unemployment in the northeast Georgia mountains remains stubbornly high, more of the hospital’s patients have no health insurance.

Among those patients with private coverage, an increasing number have high-deductible policies, which means that patients must pay all or a large portion of the bills out of pocket. And a large share of patients have Medicaid, the federal-state program for low-income people that often doesn’t reimburse enough to cover the cost of services, hospital officials say. 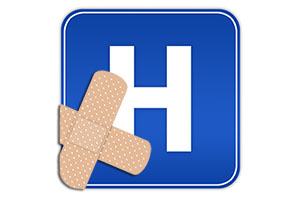 The hospital has enough cash to meet its payroll and service its debt, but that’s about it, says Jack Fulbright, the acting CEO.

Financial problems recently led Calhoun Memorial Hospital in Arlington in southwest Georgia to close its doors. Earl Whiteley, the hospital’s CEO, cited as a major reason the increase in charity care that the 25-bed facility incurred. “You just can’t continue to give away free care,” Whiteley said in a recent interview.

The closure of a hospital can have broad repercussions for a rural area, including:

–Deteriorating health care. People in rural areas tend to have poorer health than elsewhere. Patients’ health outcomes in Stewart County, where Stewart-Webster Hospital is located, were ranked next to last among Georgia counties, according to new 2013 county health rankings produced by the University of Wisconsin and the Robert Wood Johnson Foundation. The bottom 10 Georgia counties in the rankings are mainly rural.

–Recruiting doctors to the community. “Rural hospitals are struggling to produce an economic quality of life for young physicians,” says Jimmy Lewis, CEO of HomeTown Health, an organization of rural hospitals in Georgia.

–Maintaining economic stability. The availability of health care is vital for a rural area’s economy. A hospital itself is often the top or No. 2 employer in a rural county. Habersham Medical, for example, employs more than 500 people, and the closing of Calhoun Memorial will result in a loss of 100 jobs. Stewart-Webster Hospital is the largest employer in the town of Richland. In addition, a rural area’s ability to attract businesses is partly tied to the availability of a hospital and other health care services.

–Losing important services. In a sign of the overall predicament of rural hospitals in Georgia, at least 40 of them have given up delivering babies. The hospitals blame high costs and low reimbursements. Another big factor is the shortage of rural obstetricians.

Rural hospitals generally operate on a very thin margin, even in the best of times.

That negative trend will be aggravated by sequestration, the automatic federal spending cuts that went into effect this month. It will reduce Medicare payments by 2 percent and could result in the loss of 12,000 rural hospital jobs, from nurses to support staff, according to Slabach.

Rural health care is accustomed to tough times, but this period appears especially tough, he says.

The Georgia legislature moved quickly this year to help rural hospitals, passing a bill that will speed renewal of a fee hospitals pay allowing the state to draw down an extra $400 million in federal Medicaid funding.

But Georgia hospitals will also lose $400 million in federal indigent care funds under the Affordable Care Act, which has many hospital industry officials concerned. The law cut back payments, called Disproportionate Share Hospital funding or DSH, that had helped cover care for uninsured patients.

The law assumes that most of these uninsured patients would get coverage through an expansion of the Medicaid program. The U.S. Supreme Court ruled last year, however, that states don’t have to expand Medicaid to cover such people, and Republican Gov. Nathan Deal says Georgia won’t do it because it’s too costly.

Medicaid expansion is necessary to add more paying customers for hospitals, Lewis says. “We don’t have a choice’” in order to save rural providers.

Fulbright of Habersham Medical Center says Medicaid expansion “would certainly help us.” Meanwhile, the hospital is seeking a partnership or affiliation with a bigger hospital, perhaps Northeast Georgia Medical Center in Gainesville.

“We’re looking at everything we’re doing [to find] the best way forward,” Fulbright says. Recently the hospital sought to be annexed by the city of Demorest, which would lower its utility bills and security costs.

For many rural hospitals, a key way to cut costs is to eliminate childbirth services.

Last year, Burke Medical Center, south of Augusta, gave up obstetrics, saying it was losing more than $1 million on the services.

Unless a birth is considered so imminent that it’s an emergency — in which case the delivery is performed in Burke’s emergency room — pregnant women must travel 25 miles or so to Augusta to have their babies.
Among Georgia’s “critical access” hospitals — rural facilities with no more than 25 inpatient beds — 32 of 34 have given up maternity services, according to Lewis of HomeTown Health.

One reason is that it’s difficult to maintain a high-cost service with low reimbursement rate.

About 60 percent of births in Georgia every year are covered by Medicaid, and Georgia physicians and hospitals say the government insurance program generally does not pay them enough to make up for the costs of the care. Georgia obstetricians have not had a Medicaid pay increase in more than a decade.

“Payments don’t cover deliveries and follow-up care,” says Lewis. And if there’s only one OB in an area, that doctor is always “on call,” he adds.

Pat Cota, executive director of the Georgia OBGyn Society, says roughly 40 counties in Georgia — one in every four — has no OB/GYN. “Between Athens and Augusta, there’s no delivery hospital.” Cota says. “It continues to get worse and worse.”

Pregnant women in Burke County get prenatal care through family medicine physicians and nurse practitioners in the area.

Infant mortality is improving in the state, though Georgia still ranks among the bottom 10 states on that measure, says Dr. Paul Browne, director of maternal-fetal medicine at Georgia Regents University in Augusta, which is helping Burke County with its prenatal care. He adds that the maternal death rate in the state is actually getting worse.

Increased reimbursement for physicians is a critical need, Browne says. But he acknowledges that it’s hard to persuade budget makers to include such funds given the state’s financial crunch.

The big question, he says, is: “Will the state subsidize rural health care in Georgia?”