Rural hospitals are typically cash strapped, and people with information technology skills can be hard to find outside of big cities. 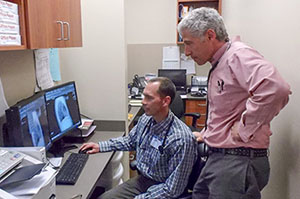 That means a lot of small hospitals are turning to bigger hospitals for help, and giving up some independence in return. The hospital in Red Lodge is one of these. A historic mining town just outside Yellowstone National Park, Red Lodge is about 60 miles west of Billings. On a recent spring day, the only thing slowing cars on Main Street in Red Lodge is a flock of wild turkeys strutting across the pavement.

Just days before, though, this road was covered with two feet of snow. Getting in and out of Red Lodge can be a challenge, as Dr. Billy Oley knows. He lives just a few miles from where he works, at the 10-bed hospital here.

“There was a time that the nurses won’t let me forget,” he says. “I drove my tractor to work one day because I couldn’t get my truck here. I had to plow with the tractor all the way to the hospital, and I just kept it here.”

On days like that, Oley and his patients are particularly grateful for his hospital’s electronic medical records. He can share patient records instantly and securely with the big hospital in Billings and get expert advice on an almost daily basis.

“We see a lot of patients who are able to not have to travel or see specialists, or do different things because we can just take care of it here,” Oley says.

Sharing electronic records sounds simple, but for a lot of little hospitals, doing that, and meeting new federal digital standards means coming up with a million dollars or more up front. That’s tough, when the average rural hospital runs a financial loss of 8 percent a year, says Brock Slabach with the National Rural Health Association.

So Red Lodge became part of the bigger Billings Clinic system, in part to get help with IT. When hospitals align or merge, they give up some, or maybe all, control of their operations – from which records system they’ll use to which doctors and services are available where. But affiliating with a big network often has benefits and can improve the care available in small towns.

Scott Duke with the Billings Clinic system says a lot of small hospitals are weighing tradeoffs like Red Lodge’s in return for help for EMRs.

“To almost everyone we talk to, the EMR is right there” as a top concern, Duke says.

But for many rural hospitals it’s a point of pride, and matter of survival, to stay independent, and make their own decisions about the future.

Four hour’s drive west from Red Lodge, the little town of Anaconda, Mont., sits in a fold of steep mountains and lush forests. The Community Hospital of Anaconda is a scrappy independent, and a proven survivor. It’s got 25 beds, and executive Meg Boynton says people in the area rely on it for everything from complex surgeries to more routine care.

This building opened in 1981. The year before, the industry that founded Anaconda, a giant copper smelter, shut down, leaving a lot of empty buildings in town. The economy remains marginal. Steve McNeece, the hospital’s CEO, says it survives because they never get too comfortable.

“Part of our goal and mission is to have a culture that embraces change and challenge,” he says.

McNeece’s hospital, unlike many in small towns, can find the $1.5 million it needs to finance the digital upgrade. He says it’s an obvious improvement over the old way they used to transfer patient information.

“Put in a manila folder and put it on the patient’s abdomen when they’re in the ambulance going to Saint Pat’s,” he laughs.

Anaconda’s hospital looks like it’s going to be able to adopt the latest information technology and stay independent. But their fate is still tied to bigger hospitals in the area. It only makes sense for Anaconda to use the same records system as the places they send most of their referrals.

“That was really the main driver in our decision making. From a patient care perspective, this seemed like a safe and wise decision,” says McNeece.

Whether rural hospitals choose to do their digital upgrade independently, or partner with a bigger system, it’s important they have a digital strategy, says Slabach with the National Rural Health Association.

“We’re very concerned about a digital divide that might be created going forward between the urban haves, if you will, and the rural have-nots,” he says.

This story is part of a collaboration between NPR and Kaiser Health News.