In a first for Indiana, the state’s legislature last week passed a bill permitting drug users in areas with disease outbreaks to trade used needles for clean ones. It’s in response to an HIV outbreak of historic proportions. Kaiser Health News correspondent Sarah Varney and PBS NewsHour producer Jason Kane travelled to Austin, Indiana, near the Kentucky border, to file this story that aired on the NewsHour on May 1, 2015.

This is a transcript of the story:

SARAH VARNEY, Kaiser Health News: Local churches in Austin, Indiana, have taken to the streets to reclaim their neighborhoods from a drug-fueled HIV epidemic that has decimated this all American town.

Over the last month, this prayer walk has grown from a handful to hundreds. Austin is a largely white town of some 4,000 people, proud of its country roots and manufacturing plants that have held on despite hard times and growing poverty. It’s a place where everyone knows everyone else, but few families have escaped drug addiction.

HIV cases had been few and far between in this rural patch of southern Indiana. But, in January, the number of confirmed cases jumped to 11, then to 40, and now more than 140 people are infected. It’s the largest HIV outbreak in Indiana’s history and the largest seen in rural America in many years.

Dr. William Cooke is Austin’s only physician. He says the conditions for an outbreak have been ripe for a decade. 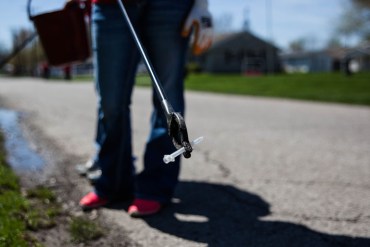 A volunteer holds a used syringe found a long a ditch line on Church St. in Austin, Indiana on April 11,2015. (Photo by Seth Herald/NurPhoto via AP Images)

DR. WILLIAM COOKE, Foundations Family Medicine: We had a high incidence of drug use. That started off as just painkillers, people sharing their prescriptions with each other, buying prescriptions, that sort of thing. And then somewhere around 2010, 2011, that took a turn towards I.V. drug use.

SARAH VARNEY: A prescription painkiller called Opana had been reformulated, and addicts found they now needed to inject it to reach a euphoric high.

DR. WILLIAM COOKE: In the county, it wasn’t surprising that HIV came in next.

SARAH VARNEY: Cooke says his pleas for resources and financial help went unanswered, until the number of HIV cases spiked. Then the response was swift.

SARAH VARNEY: State and federal public health officials descended upon the town. They helped set up a testing and drug counseling clinic, deployed a mobile van, and started tracking down those who shared needles or had sex with infected residents.

Public health officials urged Republican Governor Mike Pence to set aside his opposition to needle exchanges, which he has said condone drug abuse and had long been illegal in Indiana. Using his executive authority, though, Pence agreed to a short-term emergency needle exchange site in Scott County, where addicts can pick up clean syringes.

Scott County public health nurse Brittany Combs says that practice has been shown to stop addicts from sharing old needles that can spread HIV and often can keep discarded needles off the street.

BRITTANY COMBS, Public Health Nurse, Scott County Health Department: So, we give them enough needles to last a week because we want them to keep coming in every week. Every single time somebody comes in, they get substance abuse treatment education. They get harm reduction education. And that’s our goal, is to get them to come back, keep coming back, and then they trust you more.

SARAH VARNEY: More than 7,000 syringes have been handed out so far. But with the emergency needle exchange program set to expire, the Republican-dominated legislature voted to allow syringe programs for all high-risk regions in Indiana.

The evidence that needle exchanges can prevent new HIV infections has done little to sway frightened neighbors, who complain that the town’s ditches, trash cans and playgrounds are awash in blood-stained syringes.

EMMA JONES: Like, over there at the apartment buildings, you find them everywhere, everywhere laying around. My sister there, she found one in her son’s yard. And that’s her grandson. (Little boy shouts about needles.) See? Little kids are even talking about the needles. Four years old.

SARAH VARNEY: Emma Jones says the outbreak has brought shame upon her town and spread false rumors about how HIV is contracted.

EMMA JONES: It’s been a problem at school, because my little girl’s playing tennis one day, and they came in with another team to play them. And the other girls didn’t want to play with — with them. They said that the balls had HIV in them.

SARAH VARNEY: Kris Hunley says he used to be part of the problem. Hunley has stopped using intravenous drugs and is HIV-free. But he says even those addicts who have HIV are driven more by their cravings than a need to take care of themselves.

KRIS HUNLEY: Well, they’re destitute and hopeless. And, actually, they’re just worried about keeping themselves from being sick, you know? They see all this going on, but, at the same time, they’re still hung with a stronghold of addiction, and they’re not paying any attention.

SARAH VARNEY: The town has clashed over the right way to respond, with neighborly love for those addicted vs. a desire to arrest them or run them out of town.

DONALD SPICER, Chief, Austin Police Chief: It’s going to be the mobile home here on the left. We made four arrests here last week, a grandmother and two grandchildren were arrested out of that house.

SARAH VARNEY: Austin Police Chief Donald Spicer says people need help, but he has a job to do. He’s made 30 drug-related arrests in the last three months. Still, he’s well-aware that fed-up residents want him to do more.

SARAH VARNEY: For now, in Austin’s neighborhoods, where residents are pushing back against drug dealers, tensions are high.

TAMMY BREEDING: I know where they go, what they do.

(Tires squeal as a pickup truck speeds out of the neighborhood.)

SARAH VARNEY: You know that person?

TAMMY BREEDING: Yes. That’s one of your — another local drug heads.

SARAH VARNEY: Tammy Breeding homeschools her children. She says dealers sell drugs on her street and drug-addled prostitutes flag down cars. The sign on her lawn and the gun on her hip, she hopes, will warn them off.

SARAH VARNEY: But that’s exactly what health officials fear — that infected addicts and even truckers traveling along Interstate 65 who hire local prostitutes will carry the virus far and wide. They’re worried it could spread quickly, because the same conditions here in Austin can be found in many towns across America.

For the PBS NewsHour, I’m Sarah Varney in Austin, Indiana.