BELHAVEN, N.C. — People in this one-stoplight farming town really want their hospital back.

The July 1 closure of Vidant Pungo Hospital, which gained national attention through Mayor Adam O’Neal’s 273-mile protest walk to Washington, D.C., is a constant refrain here. People gossip about it over dinner at the Fish Hooks Cafe, or during the Tuesday night bluegrass and gospel music open mic night, held just down the street from the vacant hospital. 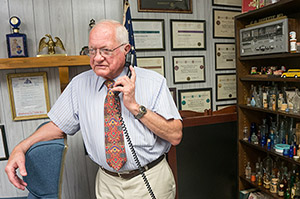 Dr. Charles Boyette is a primary care doctor who has been practicing in Belhaven, N.C., for more than 50 years (Photo by Lisa Gillespie/KHN).

In a scenario playing out in rural areas across the country, the closing has left local doctors wondering how they will make sure patients get timely care, given the long distances to other hospitals, and residents worrying about what to do in an emergency and where to get lab tests and physical therapy. “Half of them aren’t going anywhere,” Dr. Charles Boyette said about people who already seem reticent about driving farther for medical treatment. “They’re taking a chance on if they’ll be alive or dead after the emergency passes. The disaster has already started.”

People in the community also wonder about the closure’s long-term impact. After all, the hospital was the largest employer and health care provider in the area.

Belhaven, located in eastern North Carolina about two and a half hours southeast of Raleigh, is home to more than 1,600 people. The median income here is $17,670 — three times less than the state median. The hospital also drew rural residents from surrounding Beaufort County and neighboring Hyde County.

The 65-year-old hospital closed almost three years after Vidant Health, the largest health system in this part of the state, took over the financially-strapped facility. Built in 1948, it was one of the first federally-designated “critical access hospitals” in the country – meaning it was located in a medically underserved area and 35 miles from the nearest hospital. But now that it’s shuttered, the town must come to grips with the new reality. At least 30 other critical access facilities have closed in the past three years.

According to Vidant Health, 77 percent of the health care services provided at Vidant Pungo were primary care related. To meet those needs after the closing, Vidant set up an around-the-clock primary care clinic in Belhaven, but the staffing and equipment are limited.

Boyette, a primary care doctor who’s practiced in Belhaven for more than 50 years and served as mayor for 30 of them, said he feels new limitations. “We’re going back to the dark ages of health care,” he said.

Emergency patients and those who need sophisticated lab tests and radiology procedures will have to travel to the two closest hospitals — Vidant Beaufort Hospital, for some residents as many as 60 miles away in Washington, N.C., and The Outer Banks Hospital, up to 70 miles away in Nags Head.

Both Beaufort and Hyde county officials are upgrading their ambulance services to better triage patients for the long rides to those emergency departments. Hyde County officials have split the county down the middle using Highway 94 as the dividing line. Anyone to the east will be sent to The Outer Banks Hospital, while those to the west will be taken to Vidant Beaufort. In both cases, the drive times could be as much as an hour and a half.

Local doctors are concerned about the ability to deliver high-quality care without the necessary equipment. “If someone has a stroke, and we can’t get a CT on them to administer treatment, or if they have trauma and they can’t get fluid replacements, they’re going to die,” Belhaven physician Mark Beamer said.

Two weeks after the hospital closed, Margot Cardon, 86, of Belhaven, who is diabetic, home-bound and has a screen inserted into her lung to prevent a blood clot from reaching her brain, had a debilitating migraine. Boyette’s waiting room was already backed up and the primary care clinic was swamped. 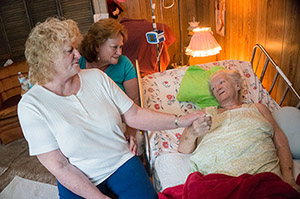 Mary Overton, left, and Lynn Rowe check on their mother, Margot Cardon, 86, who lives in Belhaven, N.C., which is almost 30 miles from the nearest hospital (Photo by Lisa Gillespie/KHN).

Cardon’s daughter, Mary Overton, feared that the blood clot had somehow broken through the screen so she drove Cardon the 32 minutes to Beaufort’s emergency room. They waited four hours without being seen before returning home, where Overton surrounded her mother’s head with ice packs, gave her liquid Vicodin for the pain and prayed the pain would subside.

Without a nearby hospital, Boyette worries that he and the other local physicians won’t be able to find doctors to fill their spots when they retire.

“The three you have now are the last of the Mohicans,” he said, noting that Mark Beamer is in his late 40s, and the other primary care doctor, Gregory Jones, who has practiced in Belhaven since 1989, is in his late 60s. “No one will come out of a medical program and come out here in the boonies with no hospital to do their work in.”

Residents know that with the loss of the hospital, which will have an estimated economic impact of between $14 million and $16 million a year, Belhaven won’t be the hub it was. Arthur Bonner, who lives outside of Belhaven, still makes the trip to town to get prescriptions filled, shop at the Food Lion and visit friends.

“This is a big deal, it’s going to put the town out of business,” Bonner said. “We lost all the employees, the income, and now people have to figure out what they’re going to do with medical care.”

When A Hospital Closes