The Republican chairman of the House Budget Committee surprised no one Tuesday when he released a spending blueprint that would drastically reshape the Medicare and Medicaid programs for the elderly and poor in an attempt to rein in their soaring costs. 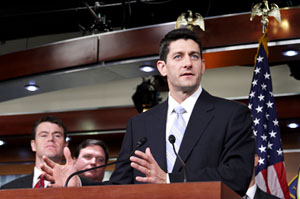 Democrats predictably pounced on the proposal by Rep. Paul Ryan of Wisconsin, making clear they would make it a major campaign issue.

The plan would gradually raise the eligibility age to 67 by 2034 and cap Medicare spending growth at gross domestic product growth plus 0.5 percent.

It would turn Medicaid over to the states in the form of a federal block grant, “constraining Medicaid’s growing cost trajectory by $810 billion over ten years,” according to the document, which said:

“If Congress wants to avoid defaulting on federal health and retirement programs, it must adopt a program of gradual adjustment now – one that frees the nation from the shadow of debt, strengthens its health and retirement safety net, protects those in or near retirement from any disruptions in their benefits, and supports robust economic growth and job creation. Otherwise, the nation will face more significant, unpopular and immediate overhauls later.”

In Ryan’s 2012 budget resolution, which the House approved, the growth of federal spending on Medicare would have been limited to the growth of GDP plus 1 percent. Since then, President Barack Obama proposed a tighter cap, at GDP plus 0.5 percent, which is the same as Ryan’s plan today.

Ryan’s Medicare proposal is nearly identical to a premium support idea that he put forward in December with Sen. Ron Wyden, D-Ore., and to one that GOP presidential hopeful Mitt Romney crafted a month earlier in November. Ryan’s new budget would provide a set amount of money for future Medicare beneficiaries – those currently under the age of 55 – to purchase either a private health plan or the traditional government-administered program through a newly created Medicare exchange. That would begin in 2023.

Health in the new GOP Budget

Read the health portion of the new GOP budget:

All plans, including traditional Medicare, would submit bids for how much they would charge to cover a beneficiary’s health care costs. The government would pay the full premium for the private plan with the second lowest bid, or for traditional Medicare, whichever is lower. Beneficiaries would have to pay the difference if they chose a plan that set rates higher. There could be one less expensive plan option, and beneficiaries who chose it would get a rebate for the difference.

Private health plans would have to be at least actuarially equivalent to the coverage offered in the traditional, government-administered option. That means that the benefits could vary, but the value of the plan would have to remain the same.

In a presidential election year, proponents welcomed the Ryan-Wyden promise of traditional Medicare as more politically palatable than Ryan’s proposal from last year, which would have allowed only private plan options. And they expected that Ryan would include it in the 2013 budget.

But some critics are already arguing that the government-administered option would not be affordable and that it could cause doctors to leave the program. Critics have argued that the government-run plan would attract the sickest people, driving up its costs, while private plans would lure the healthiest.

Ryan makes it clear in his proposal that the cost to beneficiaries would be determined solely by competitive bidding between the private and public plans. If Medicare spending exceeded GDP plus 0.5 percent, then, other savings would have to be found in the program, and politicians have a long history of cutting payments to doctors, hospitals and other medical providers.

Democrats – ignoring Wyden’s role – vowed to launch a sweeping campaign against the Medicare proposal. A “Medicare Madness” graphic topped the website of the Democratic Congressional Campaign Committee Tuesday, which in a memo said it would “hold targeted Republicans accountable with automated and patch-through phone calls, citizen phone banks, earned media events, op-eds, letters to the editor, a new online Medicare Action Center, and paid advertising to be announced later in the Medicare March campaign.”

The White House criticized the budget blueprint as providing tax breaks for wealthy Americans, oil companies and Wall Street on the backs of seniors. “All of these tax breaks would be paid for by undermining Medicare and the very things we need to grow our economy and the middle class – things like education, basic research, and new sources of energy,” said White House Communications Director Dan Pfeiffer. “And instead of strengthening Medicare, the House budget would end Medicare as we know it, turning the guarantee of retirement security into a voucher that will shift higher and higher costs to seniors over time.”

Wyden, anticipating backlash from his own party, defended his partnership with Ryan in a column on Huffington Post Monday even as he distanced himself from the overall GOP budget proposal – “I can’t imagine a scenario where I would vote for it.”

He said “unless Congress enacts meaningful Medicare reform in the near future, seniors will be faced with inevitable cost-shifting and eventual benefit cuts until Medicare doesn’t look anything like the program does today.”

Even if the House passes the budget resolution, the Senate is unlikely to follow suit. And even if it did, budget resolutions are non-binding and don’t establish law. However, the process lays an important foundation for positioning over Medicare, which is already proving contentious in presidential and congressional campaigns.

Both houses of Congress are unlikely to consider legislation to overhaul Medicare or Medicaid until a new Congress – and possibly a new president – are seated in 2013. But Congress is expected to return to Washington after the election to consider major deficit reduction legislation. If lawmakers fail to reach agreement, automatic spending decreases will take effect starting in 2013, and Medicare spending would be cut by 2 percent – all from payments to hospitals and other care providers.

Today’s budget proposal also would prohibit Congress from using spending reductions in Medicare for other purposes. That would “stop the raid on the Medicare trust fund that was going to be used to pay for the new health care law. Any current-law Medicare savings must go to saving Medicare, not the creation of new open-ended health care entitlements,” according to the document.

The proposal also would repeal the Independent Payment Advisory Board that the health law created to hold Medicare spending to GDP plus 1 percent. Ryan calls it “the unaccountable panel of 15 unelected bureaucrats empowered by the President’s health care law to cut Medicare in ways that would lead to denied care for seniors.”