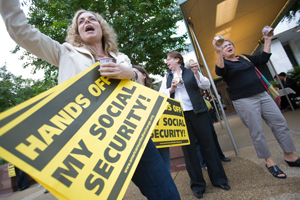 Protesters from the Alliance for Retired Americans passed out cans of cat food and chanted “young gun chow” and “Ryan retirement meal” in front of the book launch party for “Young Guns: A New Generation of Conservative Leaders.”

Cat food wasn’t on the menu at a recent book launch party for “Young Guns: A New Generation of Conservative Leaders.” But that didn’t stop representatives of the labor-backed Alliance for Retired Americans from handing out cans of the stuff to arriving party-goers at the fashionable Johnny’s Half Shell, just a few blocks from the U.S. Capitol. The less than subtle protest targeted Republican proposals in the book to privatize Social Security and turn Medicare into a voucher program.

“We’ll all be eating cat food when we’re old and gray,” Frank Clemente, manager of the Strengthen Social Security Campaign, screamed to cheering protesters who hoisted cat food and chanted “young gun chow” and “Ryan retirement meal.” The Campaign, also union-backed, is affiliated with the Alliance.

The attacks were aimed at Rep. Paul Ryan, R-Wis., who wrote the book with fellow House Republicans Eric Cantor of Virginia and Kevin McCarthy of California. All were re-elected. And because the GOP is taking control of the House, they will be in position to advance their ideas.

The Alliance held similar rallies across the country over the past couple of months, to bring Ryan’s ideas to the attention of seniors in advance of the election. While polls showed that seniors on the whole leaned Republican this election season, at the same time, a Pew Research/National Journal poll conducted in September found that 69 percent of people over age 65 — Democrats and Republicans — oppose replacing Medicare with vouchers. 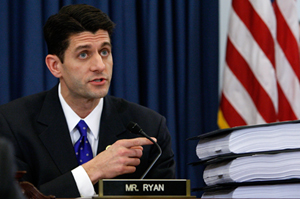 The book’s Medicare ideas come from Ryan’s Roadmap for America’s Future legislation in the past two sessions of Congress, and while it has received only limited attention, it could gain ground with the Republicans now in control of the House.

Ryan said that Medicare is on shaky financial ground; Medicare’s trustees in August called for changes to address short term liabilities. “The sooner we get ahead of this solvency issue, the more likely we can guarantee the existing system,” he said. “Gradual, phased-in reforms is the most compassionate way to move forward.”

— Current Medicare beneficiaries, and those nearing retirement (55 and older), would get Medicare as it exists today. For everyone else, eligibility would begin at 69 and a half, and there would be a “standard Medicare payment” for the purchase of private health coverage.

— At the beginning, Medicare vouchers would cover $11,000 of the cost of a health plan, which the proposal lists as the average amount of money that Medicare currently spends on a beneficiary. The total would increase with inflation, based on a combination of the consumer price index and its medical care component. If the payment exceeds the cost of a plan, the beneficiary could invest the leftover money in a medical savings account to pay for other medical needs, or buy long-term care insurance.

The government also would automatically lower Medicare spending if the program’s trustees determined that the percentage of funding from general revenues topped 45 percent. Currently, Medicare is funded through a combination of general revenues, payroll taxes and beneficiary premiums.

This kind of mechanism has been tried before, although it wasn’t automatic, and Congress ignored it. The 2003 Medicare Modernization Act, which created Medicare’s prescription drug benefit, also instituted a trigger. When spending exceeded 45 percent, the president was supposed to submit “corrective” legislation to bring it back under that threshold. Congress should have been forced to vote on corrective legislation in 2008, but it did not.

“I wrote this plan two and a half years ago, and I will rewrite it this year to show a way forward to make these programs solvent,” Ryan said.

But a handful of union groups, organized together under the alliance umbrella, is leading a vocal opposition. The Alliance represents more than 20 labor organizations including the AFL-CIO, the American Federation of Teachers and the Service Employees International Union.

Before the election, Karen Gilgoff, assistant director of AFSCME Retirees, which represents retirees of state, county and municipal governments, warned seniors will be in for a surprise when they see what key Republicans have in store: “If they win the election, seniors will regret their votes, because Republicans are trying to undermine these programs.”