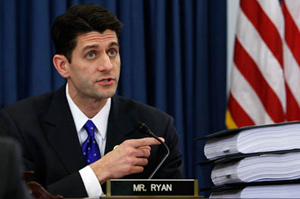 House Budget Committee Chairman Paul Ryan vowed Thursday to include aggressive reforms of Medicare in the budget proposal he is beginning to craft. Ryan reiterated his controversial idea to issue vouchers to beneficiaries.

Ryan, R-Wis., said he wants to “protect” people who are currently 55 or older by giving them Medicare exactly as it exists today. “We don’t want to pull the rug out from people on their way to retirement,” he said.

Those now younger than 55 would get a voucher to buy private insurance when they become eligible. He likens this idea to the health insurance program for federal employees  including members of Congress  who can choose from a menu of federally certified health plans.

Voucher amounts would vary depending on an individual’s income and health status. The higher the income, the lower the subsidy. Low-income people, he said, would pay little if anything, and those in the center of the middle class would fare about the same as they do now. If a person became ill and needed more medical care, more financial help would become available.

Ryan acknowledged it will be hard to get the Democratic-controlled Senate or President Barack Obama to buy into such aggressive Medicare changes. Some Republicans have also balked at the idea of introducing such a radical change to the politically-sensitive Medicare program. But he said he is heartened by the positions of possible Republican presidential candidates, including former House Speaker Newt Gingrich, former Minnesota Gov. Tim Pawlenty, Indiana Gov. Mitch Daniels and former Massachusetts Gov. Mitt Romney. “I can’t think of any that wouldn’t be serious about entitlements,” in general.

Ryan didn’t spell out details today at an event sponsored by National Journal. But as part of his Roadmap for America’s Future,  which he has said he will revise this year, Ryan has proposed beginning Medicare at age 69 for those who currently aren’t near retirement. Eligibility now starts at 65. Under the Roadmap, Ryan has proposed that vouchers cover $11,000 of the cost of a private health plan, which he has said is the average amount of money that Medicare now spends on a beneficiary.

That amount would increase with inflation, and take into account both the consumer price index and its medical care component. Beneficiaries choosing less expensive plans could flip the extra government payment into a medical savings account to pay for other medical costs or to buy long-term care insurance.

He also has proposed a system of automatic spending reductions if Medicare’s trustees determined that the percentage of funding from general revenues topped 45 percent. (Medicare is funded through a combination of general revenues, payroll taxes and beneficiary premiums.)

A Pew Research/National Journal poll conducted in September 2010 found that 69 percent of people over age 65 — Democrats and Republicans — oppose replacing Medicare with vouchers.