Cheasanee Huette, a 20-year-old college student in Northern California, is worried. Two years ago, knowing she was protected by the Affordable Care Act’s guarantees of coverage for preexisting conditions, she decided to find out if she carried the same genetic mutation that eventually killed her mother.

She tested positive for one of the cancer-related mutations referred to as Lynch syndrome.

Now, as congressional Republicans advance proposals to overhaul the health law’s consumer protections, she frets that her future health insurance and employment options will be defined by that test — and that the mutation documented in her medical records and related screenings could rule out individual insurance coverage.

“Once I move to my own health care plan, I’m concerned about who is going to be willing to cover me and how much will that cost,” said Huette, who now has coverage under her father’s policy.

With the protections of Obamacare in place, physicians in recent years have urged patients to be screened for a variety of diseases and predisposition to illness, feeling confident it would not affect their future insurability. Being predisposed to an illness — such as carrying BRCA gene mutations associated with breast and ovarian cancer — does not mean a patient will come down with the illness. And it may allow them to take steps to prevent its development.

But the results recorded on patients’ charts could haunt them, experts say.

Dr. Kenneth Lin, associate professor of family medicine at Georgetown University School of Medicine in Washington, D.C., said that doctors might become reluctant to screen for widespread conditions such as prediabetes. The Centers for Disease Control and Prevention and the American Medical Association have urged primary care doctors to screen patients at risk for the condition with a blood test. It is one of the screening tests covered under the ACA at no-cost to those patients. 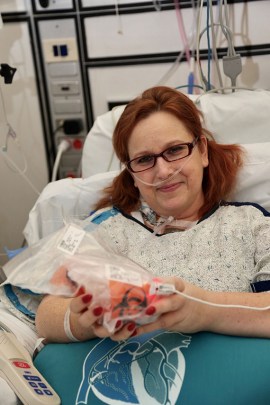 Lisa Salberg, chief executive officer of the Hypertrophic Cardiomyopathy Association, received a heart transplant in February. She was given her old heart back, frozen and in a plastic bag, so she could use it as a tool to teach people about hypertrophic cardiomyopathy. “We finally got to a place where people understood the value [of genetic testing],” she said. “Now, because we’re turning health care on its head, people are becoming more paranoid again.” (Sarah Vrablik/Speckle Photography)

If the changes being proposed by the GOP become law, Lin wrote in an email, “you can bet that I’ll be even more reluctant to test patients or record the diagnosis of prediabetes in their charts.” Such a notation might mean hundreds of dollars a month more in premiums for individuals in some states under the new bill, according to Lin.

It is a concern expressed by many patient-advocacy groups, who say members could be penalized or face the possible loss of the guarantee of coverage.

Huette is sharing her story publicly, since — come what may — her genetic mutation is already on the record — her medical record.

But genetics experts and patient advocates worry that people are already shying away from testing as the health law’s future becomes more uncertain. Their underlying concern: What if a positive result is added to their medical record, along with related screening and other preventive procedures that might further flag them to future insurers?

There have been “panicked expressions of concern,” said Lisa Schlager, vice president of community affairs and public policy at the nonprofit group Facing Our Risk of Cancer Empowered (FORCE). “Somebody who had cancer even saying, ‘I don’t want my daughter to test now.’ Or ‘I’m going to be dropped from my insurance because I have the BRCA mutation.’ There’s a lot of fear.”

These fears, which come in an era of accelerating genetics-driven medicine, rest upon whether a gap that was closed by the ACA will be reopened.

A law passed in 2008, the Genetic Information Nondiscrimination Act (GINA), bans health insurance discrimination if someone tests positive for a mutation. But that protection stops once the mutation causes “manifest disease,” jargon for a diagnosable health condition.

That means “when you become symptomatic,” although it’s not clear how severe the symptoms must be to constitute having the disease, said Mark Rothstein, an attorney and bioethicist at the University of Louisville School of Medicine in Kentucky, who has written extensively about GINA.

On paper, the legislation unveiled by Senate Majority Leader Mitch McConnell (R-Ky.) last week wouldn’t permit higher rates to be charged to people with preexisting conditions, but health policy analysts said it could effectively exclude such patients from coverage because it allows states to offer insurance that carved out coverage for certain maladies. The bill that passed the House last month has a provision that allows states to waive preexisting protections for people buying their own insurance if they have a gap in coverage of 63 days or longer during the prior year.

A genetic predilection for a certain disease is “not black-and-white,” said Dr. Robert Green, a medical geneticist who directs the Genomes2People (G2P) Research Program at Brigham and Women’s Hospital and Harvard Medical School in Boston. Once someone tests positive for a mutation, the recommended screening to catch disease at an earlier point could over time identify clinical or laboratory data “that are suggestive, but not definitive,” he said.

Green was involved with a study published this week in the Annals of Internal Medicine, which found that even seemingly healthy individuals can carry — unbeknownst to them — mutations for rare diseases. Of the 50 healthy patients who agreed to undergo whole-genome sequencing, 11 tested positive. Subsequently, two of the 11 were found to have related symptoms; the rest showed no signs of disease.

Lisa Salberg, chief executive officer of the Hypertrophic Cardiomyopathy Association, has cardiomyopathy, a condition that can make the walls of the heart thick and rigid. She was recovering from a heart transplant earlier this year when her phone and social media accounts blew up over the preexisting waivers in the House bill. “We finally got to a place where people understood the value [of genetic testing],” she said. “Now, because we’re turning health care on its head, people are becoming more paranoid again.”

When members of a Lynch syndrome-related social media group were asked about their views on testing, with assurance of no direct attribution without prior consent, slightly more than two dozen men and women responded.

Nearly all of those who posted said they were delaying action for themselves or suggesting that family members, and particularly children, should hold off. (Lynch syndrome refers to a cluster of mutations that can boost the risk of a wide range of cancers, particularly colon and rectal.)

Huette was the only one who agreed to speak for attribution.

She had witnessed the impact that worries about insurance coverage before the ACA had on patients. Her mother, a veterinarian, had wanted to run her own practice but instead took a federal government job for the guarantee of health insurance. She died at age 57 in 2011 of pancreatic cancer, one of six malignancies she had been diagnosed with over the years.

Huette said she doesn’t regret getting tested. Without that result, Huette pointed out, how was she going to persuade a doctor to give her a colonoscopy in her 20s? She added: “Ultimately, my health is more important than my bank account.”