SAN ANTONIO — Some people here just call Leon Evans “The Bear.” He is a massive man with a shock of white hair on both his head and face and wrists the size of a child’s thighs. The former All-Star wrestler earned his nickname after wrestling two living, breathing bears. “ 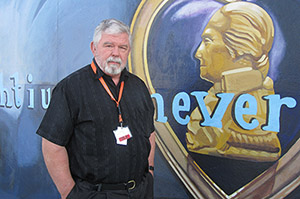 San Antonio’s program is the brainchild of Leon Evans, director of the community mental health system in Bexar County, Texas. Evans stands in front of a mural across the street from the Restoration Center in San Antonio (Photo by Jenny Gold/KHN).

“This is Bexar County” (pronounced “bear”), Evans says, “so my wife teases me about this being my third bear.”

Evans is the director of the Center for Health Care Services, the community mental health system in San Antonio and  Bexar County.

Texas ranks 49th out of 50 states in how much funding it commits to mental health.  But under Evans’ leadership, Bexar County has built a mental health system considered a model for other cities across the country — one that has saved $50 million over the past five  years.

“In my entire career I’ve always understood the people who are the least valued, the people who society thinks the least of, are the people who have the most potential,” says Evans. “You reach out to them, they’ll do amazing things and nobody expects them to.”

Evans came to Texas in 1972 as a social worker, to help set up some of the very first community mental health systems, and he’s been in the state ever since. When he took over the Bexar county system 14 years ago, the county jail was so overcrowded — packed with people in various states of psychoses — that the state was getting ready to levy fines.

That’s not unusual. Across the country, about 20 percent of inmates and prisoners have a serious mental illness that includes psychosis, according to a study from the Justice Department’s Bureau of Justice Statistics.

Evans’ idea for reform was simple: for people with mental illness, treatment works. And jail does not.

“Even here in Texas, which is very conservative, we learned some time ago that nonviolent mentally ill offenders shouldn’t be in prison. They don’t make good prisoners, ” he says, In a state of psychosis, a prisoner is hearing voices and can’t follow rules, and that means he gets no time off for good behavior, Evans explains.  “They take up space for violent offenders.”

It’s also an expensive revolving door. When people with a serious mental illness are released from jail, many end up living on the street, sick and often addicted. And then almost invariably, they end up back in jail for a minor nuisance crime, like panhandling (which is illegal in San Antonio), urinating in public, digging in dumpsters or sleeping on someone’s porch.

That all sounds very familiar to Samuel Lott. For decades, he was a white collar worker,  most recently for the BNSF railway in Fort Worth. But in 2006, he lost his job. 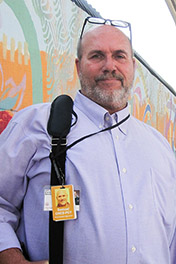 Samuel Lott stands in the courtyard of the homeless shelter across the street from the Restoration Center in San Antonio, Texas (Photo by Jenny Gold/KHN).

“Whatever diagnosis I had – depression, alcoholism, that sort of thing kicked into high gear back then, and I spiraled down pretty quick and became homeless,” says Lott.

For four years, Lott lived on the streets and camped in the woods. He was estranged from his family, got infected with hepatitis C, and his untreated depression started to take on signs of psychosis.  He had frequent run-ins with the police.

On his laptop, Lott, 51 pulls a picture of himself from 2010, the last time he was in jail. “This person is angry, unhealthy, there’s malnutrition, there’s no direction. You can see from the sunken cheekbones,” he says, pointing to the screen.

Getting treatment for any of his health problems felt hopeless, especially without transportation. “It meant having to walk from one side of town– I mean, miles and miles to the other side of town — maybe to get a referral, and then you take your referral and walk clear back over to some other side of town, and then maybe you can go and get the help,” Lott explains.

In addition to scattered services,  Leon Evans says there was another problem for this population: none of the county or city agencies and nonprofits that deal with people with serious mental illness was talking to one another. The jails, hospitals, courts, police and mental health department all worked in separate silos.

“People who fund these services only look at their little small piece of the pie and whether there is a return on investment,” says Evans.

So with the help of the county judge, Evans worked to get the funders together to talk about the money they were all spending on mental health.  It turned out to be the most challenging – and the most important – piece of the puzzle.

“If you think law enforcement and mental health workers have anything in common, we don’t, except people with substance abuse and mental health problems. We speak a different language, we have different goals, there’s not a lot of trust there,” he says.

So he hired Gilbert Gonzalez to take a look at the money that they were all spending on mental health.

“You know Brad Pitt in the movie Moneyball?” asks Gonzalez. “Well, the success in that movie was based on the data and analytics. We needed to do the same thing.”

Once they stopped looking at mental health as an isolated expense in the city budget, the players realized they were spending enormous sums of money to take care of people. And they were doing a bad job of it.   Pooling their resources instead, Gonzalez found, would offer significant savings.

The courts, the jails, the hospitals, the county government and the police department agreed to work together on the issue. Everyone provided funding– the police even contributed their drug seizure money – to build a system where people with mental illnesses could get better.

The result is one centralized complex which offers many services. The Restoration Center is conveniently located across the street from San Antonio’s state-of-the-art homeless shelter.

“One thing that’s really important about the San Antonio approach is that they’ve integrated services together for mental health and substance abuse and homeless services,  because most people have overlapping needs,” says Laura Usher, a program manager at the National Alliance on Mental Illness who helps set up collaborations between law enforcement agencies and mental health departments.

The center has a 48-hour inpatient psychiatric unit, sobering and detox centers, outpatient primary care and psychiatric services, a 90-day recovery program, housing for people with mental illnesses, and even job training and a program to help people transition to supported housing.

“San Antonio realized that it’s more cost effective to provide mental health services and supports to people on the front end, rather than pay for jail beds and prison time,” says Usher.

More than 18,000 people pass through the Restoration Center each year and officials say the coordinated approach is saving the city more than $10 million each year. “There’s no wrong door,” says Evans. Some patients walk in off the streets or with their families. Others are brought in by police or diverted here from programs inside the jails.

“San Antonio is ahead of what’s a growing trend across the country to try to build a non-hospital alternative for people who are experiencing a psychiatric emergency, often with co-occurring alcohol or other drug abuse,” says Dr. Mark Munetz, a psychiatrist and professor at Northeast Ohio Medical University who toured the Restoration Center last year.

But he says the San Antonio model might not work for everyone.  The Restoration Center and homeless shelter, he says, felt like “a psychiatric oasis, removing the people from the most central part of the city, it felt a little like segregating people in that part of the city, especially with the homeless shelter next door. I’m not sure how that would fly in other parts of the country.”

Nonetheless, the rest of the country has started to notice. Every state in the country has sent delegates to San Antonio to see if they can model their own mental health systems after this one.

Samuel Lott found his way there in  2010. He walked over to the Restoration Center from his jail cell a block away.  He went through the detox program, then a 90-day in-patient recovery program, followed by treatment for hepatitis C, and finally medication to help control his mental illness.  The center helped place him in an apartment of his own and provided him with additional job training.

He pulls up another photo on his laptop, this one taken Thanksgiving of 2012, two years after he arrived at the center. It’s a picture of Lott with his arms around his family – mother, father, brother, niece and nephew. He looks like a different man.

“I’ll start crying if I talk about it,” says Lott, who is now healthy and employed at the center. “It felt so good to be home, with my mother and my dad. And I had expected them to be angry and hurt, but it was the exact opposite. They were so happy for a member of the family to come home. Now I email with them every single day, text, Facebook, make plans for gatherings.”

He says he’s helping other people find the kind of hope and healing that he has.