SAN ANTONIO — It’s almost 4 p.m., and Officers Ernest Stevens and Ned Bandoske have been driving around town in their black unmarked SUV since early this morning. The officers are part of San Antonio’s mental health squad – a six-person unit that answers the frequent emergency calls where mental illness may be an issue.

The officers spot a call for help on their laptop from a group home across town. 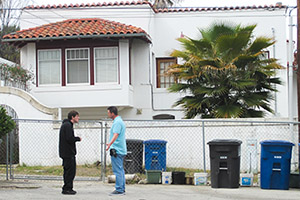 Officer Ernest Stevens of the San Antonio Police Department’s mental health squad talks to a young man named Mason, who has set his blanket on fire and says he is hearing voices (Photo by Jenny Gold/KHN).

“A male individual put a blanket on fire this morning, he’s arguing with them, and is a danger to himself and others, he’s off his medications,” Stevens reads from the blotter.

A few minutes later, the SUV pulls up in front of the group home in a run-down part of the city.  A thin 24-year-old sits on a wooden bench in a concrete lot out back, wearing a black hoodie. His bangs hang in damp curls over his forehead.

“You’re Mason?” asks Bandoske. “What happened to your blanket?” Eight years ago, a person like Mason would have been heading to the emergency room or jail next. But the jail in Bexar County, Texas, where San Antonio is located, was so overcrowded – largely with people with serious mental illnesses – that the state was getting ready to levy fines.

To deal with the problem, San Antonio and Bexar County have completely overhauled their mental health system into a program considered a model for the rest of the nation. Today, the jails are under capacity, and the city has saved $50 million over the past five  years.

The effort has focused on an idea called “smart justice” – basically, diverting people with serious mental illness out of jail and into treatment instead.  It is possible because all the players in the system that deal with mental illness — the police, the county jail, mental health department, criminal courts, hospitals and homeless programs – pooled their resources to take better care of people with mental illness. 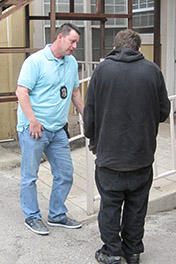 Stevens tries to connect with Mason, asking the man questions to ascertain his state of mental well-being (Photo by Jenny Gold/KHN).

In San Antonio and cities across the country, police officers often serve as de-facto mental health workers. When a family confronts an emergency with a loved one in a state of psychosis, they usually dial 9-1-1, and the police respond.

Sometimes the resulting confrontations can have disastrous results, such as a case last year in North Carolina, where police shot and killed a teenager in his home after the family called for help during a schizophrenic episode.

More often, the person ends up in jail. Across the country, jails hold 10 times as many people with serious mental illnesses as state hospitals, according to a recent report from The Treatment Advocacy Center, a national nonprofit that lobbies for treatment options for people with mental illness.

San Antonio’s new approach starts with the kind of interaction Bandoske and Stevens are having with Mason. The troubled young man is hunched over, and his eyes dart back and forth between the two officers. KHN is using only his first name because he was in the middle of a mental-health crisis.  He mumbles answers to their questions, sometimes stopping to stare at a spot in the distance.  For outsiders, it’s hard to know what’s going on,  but the officers can tell Mason is hallucinating. Bandoske kneels in front of him, trying to maintain eye contact and get Mason’s attention.

“Are you hearing some voices right now? You are, aren’t you? What are the voices telling you?” he asks. Mason is silent, but Bandoske persists. “Hey Mason, you’re seeing something that I’m not seeing. What is it?”

Mason acknowledges that, yes, he’s hearing voices. And, yes, they’re telling him to do bad things to himself. Officer Bandoske also spots a dime-size scab on Mason’s face. “Hey Mason, is that on your face from a cigarette? What’s it from?”

“Do you ever feel like something is crawling on you?” asks Bandoske. The answer is yes – a sign of tactile hallucinations.

These officers seem more like social workers. Stevens says that’s a huge change from his early days on the police force. 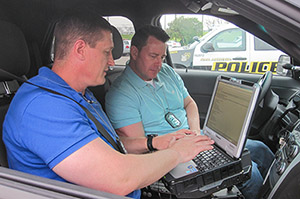 Officers Ned Bandoske, left, and Stevens are part of the San Antonio Police Department’s mental health squad, a six-person plain-clothes unit that answers the frequent emergency calls where mental illness may be an issue (Photo by Jenny Gold/KHN).

“We had absolutely no training 20 years ago in the police academy on how to deal with mental health disturbances,” recalls Stevens.

Back then, Bandoske adds, police responded to mental health emergencies the way they would to any other call: They used the tough guy command voice they’re taught to handle criminals. “Police are notorious for the A personality type. They walk into a situation. They gain control of it. It’s their call now. They’re in charge,” he says.

And more often than not, the officers ended up taking people like Mason with serious mental to jail. “They would be arresting them for just minor misdemeanor offenses such as trespassing or criminal mischief or just disturbing the peace type calls,” says Stevens.

The other option was to take the person to a hospital emergency room. But in San Antonio, the police were waiting an average of 12 to 14 hours in the hospital until the person could to be triaged; that often made jail seem like a much more appealing option.

“You can book somebody in the jail in 20, 30, 45 minutes tops, especially if you have a partner to help share the paperwork load, and then you’re back out on the streets,” says Bandoske.

The police were arresting the same people over and over again; many not only had a serious mental illness but were also addicted to drugs or alcohol and were often homeless.  And whether they went to the jail or the ER, it was expensive for everyone — the jails, the hospitals and the police department that had to pay for overtime while cops waited at the hospital. And it meant that fewer police were available to work the streets.

San Antonio’s response was to require all officers to take a 40-hour course called Crisis Intervention Training,– to learn how to handle mental health crises, like the one with Mason.  The course includes visits from families of people with mental illness, who come in to tell their stories. And while some officers, like Bandoske and Stevens, specialize in mental health, all learn de-escalation techniques and how best to interact with someone in a state of psychosis.

The effort to train police to handle mental health emergencies is gaining steam across the country. Fifteen percent of police departments nationwide offer the program.

But even with strong programs, there’s only so much that training alone can do; there’s still the problem of where to take patients like Mason, other than jail or an emergency department.

San Antonio tackled that problem, too.

“I’ll be honest with you.  When it first came out, I was very skeptical. I thought, well this is ridiculous. If somebody’s breaking the law, if they’re public intoxication, they should go to jail,” says Bandoske.

People who commit a felony still go to jail, regardless of their mental status. And those who need extensive medical care are still taken to the hospital.

But for patients like Mason, San Antonio built another option: the Restoration Center – a totally separate facility with a 16-bed psych unit, a medical clinic and a “sobering room” where police can drop off people who are intoxicated.

The Restoration Center was built with cops in mind to allow them to drop off their charges as quickly as possible. There’s a work station for paperwork, free coffee and a nurse available to provide medical clearance for people who are arrested, even those without a mental illness, to save the police a trip to the ER whenever possible.  The center is saving the police department at least $600,000 a year in overtime pay.

Restoration Center nurse Catherine Riojas checks Mason in immediately after Bandoske and Stevens arrive with him at the center.

Mason seems more settled now, as she collects all of his property – cigarettes, jewelry and a folded piece of construction paper with a poem.  She gives Mason a physical and helps him get settled in the 48-hour inpatient psychiatric unit.

And then, about 15 minutes from the time the police walked through the door of the center, they’re heading out again, ready to get back on the street.