SAN DIEGO — Death sometimes came slowly at one of the nation’s largest and most respected hospices. That’s not unusual. But here’s a twist: For some patients, it came not at all. 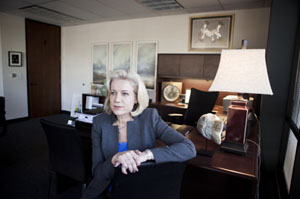 Kathleen Pacurar is president and CEO of San Diego Hospice and the Institute for Palliative Medicine. A federal audit of its admitting practices has forced the hospice to cut 260 workers and discharge 100 patients who aren’t considered to be within six months of death. (Photo by Sam Hodgson/For KHN).

Not anymore. In the wake of an ongoing federal audit and an internal investigation, the nonprofit hospice’s patient load has dropped by hundreds as it targets its services more tightly to only those within the six-month window.

The resulting cash crunch forced it to cut 260 workers and close a 24-bed hospital this month.

Across the country, hospices with generous admissions policies may find themselves on life support too. Medicare, which heavily funds hospice programs, is cracking down on the industry’s growing habit of embracing those whose deaths aren’t imminent.

It’s not clear how many hospice programs are being investigated. But there’s definitely an increased level of scrutiny, said J. Donald Schumacher, president and CEO of the National Hospice and Palliative Care Organization.

Indeed, the Health and Human Services Office of the Inspector General has, in recent years, made such investigations a priority. In 2012, for instance, the agency’s work plan included an ongoing review and assessment of the “appropriateness of hospices’ general inpatient care claims.” In addition, the 2013 plan emphasizes the need to examine the relationships between hospices and nursing homes: “OIG found that 82 percent of hospice claims for beneficiaries in nursing facilities did not meet Medicare coverage requirements.”

“We’re facing a time of much more extraordinary focus on guidelines and regulations,” said Kathleen Pacurar, president and CEO of San Diego Hospice, who’s had to cut her staff by about 30 percent.

Why this spotlight on hospice? Because it’s a booming business, a $14 billion industry that served an estimated 1.65 million people in the United States in 2011. That’s about 45 percent of all those who died that year, the hospice association estimates.

Medicare paid for the hospice benefits of 84 percent of those patients. When used properly to provide dying patients with palliative care instead of continuing futile medical treatments, hospice care can save the government money, research has shown.

At San Diego Hospice, the trouble began when federal officials launched an audit of 2009-2010 admissions that’s still ongoing. An internal investigation at the hospice revealed that it didn’t always properly document that patients had six or fewer months to live, according to Pacurar.

In a statement responding to questions about the San Diego case, the Centers for Medicare & Medicaid Services said: “We take seriously our responsibility to safeguard taxpayer dollars from fraud and abuse. We are working with this facility to ensure that the immediate needs of patients are being met, while actively monitoring billing to prevent abuse or fraud.”

Overall, San Diego Hospice’s patient load has dropped from 1,000 to about 600, although Pacurar said it continues to accept all eligible patients. She said the numbers have dropped for multiple reasons: the hospice admits fewer patients due to tighter criteria, it has discharged about 100 patients who aren’t considered to be within six months of death and it’s getting fewer new patients due to bad publicity.

Things may get worse. In its statement, CMS added that any overpayments must be reimbursed to Medicare. Pacurar said she thinks the government won’t go as far as to actually cripple the hospice, but there’s no way to know. 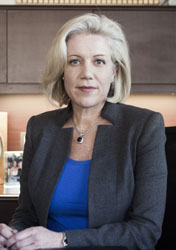 Patient load at Pacurar’s San Diego Hospice has dropped from 1,000 to about 600, a result of a federal audit and tighter admitting criteria (Photo by Sam Hodgson/For KHN).

“That’s the hard part about what our organization is going through,” she said. “We’re one of the first to go through such an extensive audit, and there’s the unknown of what they’re looking for.”

How did this mess happen? The big problem appears to be the hospice’s tendency to not kick out patients when they lived longer than six months.

“I was talking to my staff the other day, and I said to look at the percentages of patients who are here over six months,” Pacurar said. “One of my staff members said, ‘I think it’s a really amazing thing when we have patients who stay for a long time because it demonstrates that whatever we’re doing, it’s prolonging their lives.'”

And therein lies the rub. If patients recover, Medicare expects them to leave the hospice program. Patients can stay in a federally funded hospice program for more than six months, but only if they’re re-certified as still likely to die within six months.

“It’s a catch-22: Oftentimes these patients have extended prognoses because we’ve been in there working with them,” Pacurar said.

In 2011, for instance, 475 out of the San Diego Hospice’s 3,700 patients — 12.8 percent — stayed for longer than 180 days, according to California state data. The hospice said these figures appeared to be correct.

Another wrinkle: Medicare pays a set amount each day a patient is in hospice, ranging from $153 for routine care to $896 for around-the-clock assistance. Even with the varied pay levels, it’s hard for hospices to make money during the time-intensive periods when patients are first enrolled and in the final weeks and days of their lives. Instead profits usually come during the intervening periods when the patients require less attention. That creates an incentive for hospices to keep serving patients as long as possible, even for years.

“The longer a patient stays, generally speaking, the better the hospice is able to deal with those costs and probably has a greater opportunity for a higher financial margin on that patient,” said Theresa M. Forster, vice president for hospice policy and programs at the National Association for Home Care & Hospice, a national trade association for home care agencies, hospices and home care aide organizations.

Pacurar said San Diego Hospice didn’t have financial benefits in mind when it allowed patients — including those treated at home — to continue receiving services even if they weren’t expected to die soon.

To make things more complicated, the evolution of hospice care has made it more difficult to estimate how much longer hospice patients have to live.

When the hospice movement began about 40 years ago, it focused on cancer patients, whose remaining months of life would often be fairly clear. Now, the hospice movement embraces a wider range of people considered to be terminally ill, including those with conditions like heart disease and Alzheimer’s disease. Overall, it’s harder to predict when those patients will die compared to those with cancer.

“That’s where it’s started to get more gray,” Pacurar said. “The industry became much broader in the patients we took on and therefore the prognosis became more challenging.”

Another twist: It’s no secret to hospices that certain kinds of patients are more expensive to treat (such as those with cancer) and others are cheaper to treat (those with Alzheimer’s and those in nursing homes).

Another study, this one published in Health Affairs, reports that many hospices refuse to accept patients who require expensive types of treatments, such as chemotherapy (which can be used to lower pain levels), intravenous feeding and blood transfusions.

Hospices are under federal scrutiny for more than their choice of patients.

In 2011, Bloomberg News reported that the growth in hospice has been fueled by enrollment bonuses to employees and kickbacks to nursing homes that refer patients. Investigators alleged that this led hospices to accept patients who weren’t eligible for the service.

While Medicare is focusing on the problem of patients who linger in hospice, Schumacher of the National Hospice and Palliative Care Organization pointed out that a third of patients only receive hospice care in the last week of their lives. “That’s one of my greater concerns,” he said. “They don’t receive the full benefit of hospice services.”

Pacurar, of San Diego Hospice, said another group of patients needs more attention: those who are dying but aren’t within that six-month window that makes them eligible for hospice care – in other words, the patients that her hospice used to be willing to treat.

Her hospice will no longer be treating them, at least until they’re closer to death. They will remain under the care of their regular physicians.

“What do you do with patients who maybe aren’t dying tomorrow, but have got a whole year or two where they need a higher level of care?” she asked. “You’re seeing healthcare try to figure out that gap.”

Slowly Dying Patients, An Audit And A Hospice’s Undoing