Homer Bell was 54 years old when he committed suicide in April in a very public way — he laid down in front of a bus in his hometown of Hartford, Conn. It was the culmination of three decades of suffering endured by Bell and his family because of his illness, schizophrenia. 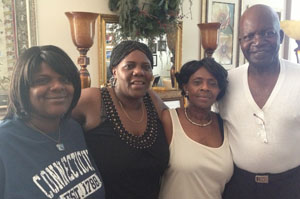 Harold Schwartz, the psychiatrist-in-chief for Hartford Hospital’s Institute of Living, describes having a family member with the illness. It’s hard to provide services and long-term housing, and, he says, “You frequently are left to observe a deteriorating child sinking into homelessness, perhaps imprisonment. If not imprisonment, at least recurrent revolving-door hospitalizations.”

That describes the Bell family pretty well. His mother, Rosalind Scott, and her daughter, Laura Bell, tell the story of the days before and after Homer Bell took his own life.

He had been to a hospital. He got out and showed up repeatedly on Scott’s porch. One night she let him into the hallway to get warm. But it was hard to let him in further — he could be loud, he could be angry, he could be paranoid. His illness had exhausted her.

One or two nights later, Homer Bell came back. But Scott was tired, and wanting relief, and she couldn’t bring herself to let him in.

Homer’s sister, Laura, jumps in to comfort her mother. “It wasn’t your fault,” she says.

After the death, and the funeral, Scott finally went through her voice mails. She had dozens. And then she heard Homer’s voice, and stopped. She says, “that’s when he apologized to the family.”

She reflects on one regret.

Schwartz, the psychiatrist, is part of the post-Newtown conversation about Connecticut’s mental health system. He says a lot of attention is now being paid to identifying young people who need help, but when it comes to helping people like Homer Bell — the homeless, chronically mentally ill adult living in the community — he sees less movement.

And, he says, sometimes, “There are many things we can do to prevent an individual from committing suicide. But we can’t always do it. We can’t always be successful.”

It’s a reality, Schwartz says, that is often hard to hear.

This piece is part of a collaboration with NPR, WNPR, and Kaiser Health News.

Schizophrenia, Suicide And One Family’s Anguish