Computer mistakes like the one that produced incorrect prescriptions for thousands of Rhode Island patients are probably far more common and dangerous than the Obama administration wants you to believe, says Drexel University’s Dr. Scot Silverstein.

Flawed software at Lifespan hospital group printed orders for low-dose, short-acting pills when patients should have been taking stronger, time-release ones, the Providence-based system disclosed in 2011. Lifespan says nobody was harmed.

But Silverstein, a physician and adjunct professor of healthcare informatics who is making a name for himself as a strident critic of electronic health records, says the Lifespan breakdown is part of a much larger problem.

“We’re in the midst of a mania right now” as traditional patient charts are switched to computers, he said in an interview in his Lansdale home. “We know it causes harm, and we don’t even know the level of magnitude. That statement alone should be the basis for the greatest of caution and slowing down.” 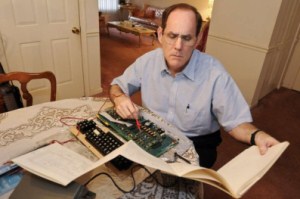 Scot Silverstein, one of the most ardent critics of electronic medical records, works on an antique computer. A growing collection of evidence suggests poorly designed medical software can obscure clinical data, generate incorrect treatment orders, and cause other problems. (Photo by Ron Tarver/Philadelphia Inquirer)

Use of electronic medical records is speeding up, thanks to $10-billion-and-counting in bounties the federal government is paying to caregivers who adopt them. The consensus among government officials and researchers is that computers will cut mistakes and promote efficiency. So some 4,000 hospitals have or are installing digital records, the Department of Health and Human Services said last month.

Seventy percent of doctors surveyed in September  by research firm CapSite said they had switched to digital data.

But the notion that electronic charts prevent more mistakes than they cause just isn’t proven, Silverstein says. Government doesn’t require caregivers to report problems, he points out, so many computer-induced mistakes may never surface.

He doesn’t discount the potential of digital records to eliminate duplicate scans and alert doctors to drug interactions and unsuspected dangers.

But the rush to implementation has produced badly designed products that may be more likely to confound doctors than enlighten them, he says. Electronic health records, Silverstein believes, should be rigorously tested under government supervision before being launched into life-and-death situations, much like medical hardware or airplanes.

Silverstein “is an essential critic of the field,” said Dr. George Lundberg, editor at large for MedPage Today and former editor of the Journal of the American Medical Association. “It’s too easy for those of us in medicine to get excessively enthusiastic about things that look like they’re going to work out really well. Sometimes we go too far and don’t see the downside of things.”

A growing collection of evidence suggests that poorly designed software can obscure clinical data, generate incorrect treatment orders and cause other problems. Cases include the Lifespan glitch; a data-entry error that led to the 2010 death of a baby at Advocate Lutheran General Hospital in Illinois; and computers at Trinity Health System, a major Midwest chain, that logged doctors’ orders on the wrong patients’ charts.

Computer mistakes voluntarily reported to the Food and Drug Administration include those that researchers said were linked to 44 injuries and six deaths at unidentified institutions. Those problems included tiny fonts causing caregivers to click on the wrong medication; flipped images that led a surgeon to operate on the wrong side of a patient’s head; and lost or misdated test results that caused unnecessary surgery or delayed treatment.

The FDA’s Dr. Jeffrey Shuren has said that such cases “likely reflect a small percentage of the actual events that do occur.”

At conferences and working from home on the Health Care Renewal blog, Silverstein chronicles digital failures and criticizes hospitals in the same dogged way that he applied himself to building the 1970s-era Heathkit computers he still keeps in his home, say people who know him.

“His message has been consistent: [health IT]provides far less benefit than is claimed by its proponents and opens new — sometimes potent — routes to failure,” said Dr. Richard I. Cook, a medical error expert at the University of Chicago who sat on a panel examining electronic record safety at the authoritative Institute of Medicine. “No one wants him to be visible. But his message and tone have not wavered.”

The HIMSS Electronic Health Record Association, an industry group, declined to comment on Silverstein. A spokesman for the HHS’s Office of the National Coordinator for Health Information Technology, the administration’s proponent of digital records, said: “It’s important to listen to all the voices” in the discussion of the subject.

Trained as an internist and in medical info-tech as a Yale postdoc, Silverstein, 55, served as Merck’s director of scientific information in the early 2000s and then as a full-time Drexel professor, shifting in recent years to part-time teaching and working on medical liability cases for plaintiff attorneys. His insistent warnings about digital health risks over more than a decade have effectively barred him from a lucrative career at a hospital or software vendor.

“I’m sure Scot would be better off by keeping his mouth shut and getting a job with a hospital that’s just put in a big effing system,” said Matthew Holt, a Silverstein critic and co-chairman of Health 2.0, which organizes health technology conferences.

Many say he comes on too strong. Even admirers cringed when he began blogging about the 2011 death of his mother, which he blames in a lawsuit on a computer error that allegedly caused Abington Memorial Hospital to overlook a key medication. (Both he and the hospital said they couldn’t comment on a pending suit.) Personalizing his campaign, some thought, made him seem less objective.

“His refusal to temper his message makes it sometimes difficult to hear,” said Ross Koppel, a University of Pennsylvania sociologist and digital health record skeptic.

But Silverstein says his position today is the same as it has always been. He believes in the potential power of electronic records for good, he says. But any doctor who feels bound by the Hippocratic oath’s injunction to “first, do no harm,” he adds, should balk at what’s going on.

“Patients are being harmed and killed as a result of disruptions to care caused by bad health IT,” he said. “I’m skeptical of the manner and pace [of implementation], not of the technology itself…. My only bias is against bad medicine. And my bias is against people with complacent attitudes about bad medicine.”