When Fabrizio Mancinelli applied for health insurance through California’s online marketplace nine months ago, he ran into a frustrating snag.

An Italian composer and self-described computer geek, Mancinelli said he was surprised to find there wasn’t a clear way to upload a copy of his O-1 visa. The document, which grants temporary residency status to people with extraordinary talents in the sciences and arts, was part of his proof to the government to that he was eligible for coverage.

So, the 35 year-old Sherman Oaks resident wrote in his application that he’d be happy to send along any further documentation. 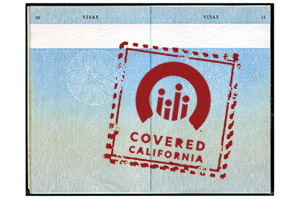 Months went by without word from the state. Then last week he came home from vacation to find a notice telling him he was at risk of losing the Anthem Blue Cross plan he’d purchased.

On Sept. 4 — five months after the end of open enrollment — Covered California sent out notices in English and Spanish to 98,000 families who bought plans on the exchange alerting them that their legal status could not be verified. As many as 50,000 households still remain unverified and must meet a Tuesday deadline to prove that they are citizens or legal U.S. residents, or risk losing coverage.

If deemed ineligible, the letters said, applicants could be liable to repay the tax credits they received, plus interest.

By the time Mancinelli got his letter, he had only days to comply.

“It’s more and more pressure,” said Mancinelli. “I understand they have lots of applications to process, but on the other end, if a document is missing, the computer should have a red flag…Don’t wait nine months.”

Each person in a household needs to submit  proof such as copies of a U.S. passport, a certificate of naturalization, a U.S birth certificate plus a driver’s license, or a state-issued identification card. Nonpermanent residents like Mancinelli have to submit certain immigration documents.

In some cases, the problem was not missing documents but something as simple as using a nickname instead of a full name or inverting the first and last names on an application, according to Covered California spokesman James Scullary. When it came time to match those names to information in federal databases, inconsistencies arose.

Glitches exist at the other end of the verification process as well. When officials have gone to confirm an applicant’s information by comparing it to records in government databases, they’ve received vague messages about why verification was not possible, consumer advocates say. It can be unclear whether the problem is the result of inconsistencies or because a database is down, according to advocates.

“This is such a difficult situation for consumers to be put in,” said Sonal Ambegaokar, a senior attorney at the National Health Law Program, a national health advocacy group.

For immigrant families, this could add to language and cultural barriers that have complicated enrollment, advocates said. Many fear the information they provide Covered California could be used by immigration officials to deport relatives, even though the state has repeatedly said that is not the case.

Other applicants are baffled as to why they need to resubmit documents they claim they have already provided Covered California, don’t understand what documents are required, or simply don’t yet have them in hand. In some cases, it can take months to get a lost social security card or permanent residency card replaced.

Scullary said he couldn’t say yet how many applicants had been deemed ineligible for coverage because Covered California is still looking through documents and helping people through the process.

Covered California has added a Frequently Asked Questions webpage to help people better understand the process. The page includes information on what documents they can submit and who is eligible, namely U.S citizens, permanent residents, refugees, and lawful temporary residents.

In addition to the written notices, “customers would have also received an email reminder that went out this week to impart on them that this is something they need to be aware of and take care of,” Scullary, the Covered California spokesman, said.

Mancinelli says he never received one.

Some nonprofit and advocacy organizations are translating the notices to other languages, like Korean and Vietnamese, or sending out notices of their own asking people if they received a notice from Covered California and informing them where they can seek help.

“There are efforts to try to get as much information out to the community as we can,” said Cary Sanders, the director of the Having Our Say Coalition in Oakland, California.

Covered California is allowing consumers to submit documents after the Sept. 30 deadline, but there is no guarantee these can be processed in time to avoid losing coverage after Oct. 31.

“Certainly if someone is able to prove they’re lawful but they’re unable to do it until after 30th, we’d work with them and their insurance company to see what we could do to keep them covered, but they do run the risk of having some sort of gap in their coverage,” Scullary said.

People deemed ineligible can contest the decision, though that process has not been finalized, according to Scullary.

The state has dedicated  a service center in Fresno to verifying documents. All the call centers have been trained to take questions from customers regarding the verification process, Scullary said.

But telephone wait times can be upwards of an hour. Chat volume went up more than 40 percent in August, probably due to consumer concern over the verification process, according to documents from Covered California.  Nearly two thirds of calls were abandoned in August, compared to a third the previous month. Up to 15 percent of callers got a busy signal.

Mancinelli tried calling several times. Once he got through he was ultimately directed elsewhere, to the nonprofit Health Consumer Alliance, for help. Rather than wait on the phone again, he waded through the information on the Covered California website himself. Finally, he found a clause saying he could upload any documents not listed on the site under the module for U.S. passport – which he immediately did.

He said he simply wants to do the right thing.