No matter which party dominates Washington after November’s election, policy makers will have to agree to big changes in the mammoth Medicare program to limit federal spending, says Thomas Scully, senior counsel at Alston & Bird, and a former Medicare administrator under President George W. Bush. In an interview with Kaiser Health News, Scully urged Democrats and Republicans to set aside partisan differences and take a closer look at the controversial premium-support model, which would give beneficiaries a set amount of money to purchase coverage. 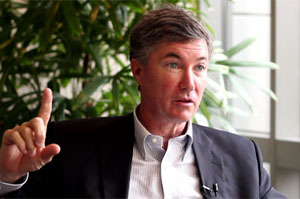 Here are edited excerpts of the interview.

Q: Will Congress and President Obama return to Washington after the election to cut a budget deal, which would mean major reductions in Medicare spending?

We’re never going to have a lame duck session. These guys hate each other, sadly. They’re going to come back three weeks after an election with half of these guys having lost and they’re going to get the votes to do something big? …They’ll kick the can no matter who wins. If it’s President Romney, they’ll kick the can to June, because a new president can’t find the men’s room for the first four months. There’s no staff, no people. There are too many pieces and the relationships aren’t there. The votes aren’t there.

Q: In the longer term, will policy makers move beyond their partisan disagreements and restructure Medicare using the Republican-backed premium support model, which would limit federal spending per beneficiary?

Premium support is Part D, [Medicare’s prescription drug benefit]. When we designed Medicare Advantage, [the private health plan program in Medicare] it was premium support. Premium support is the Federal Employee Health Benefits Plan. … That is a reasonable way to fix the Medicare program, phased in over the long term. … The problem is these things get so politicized. … The world was going to end because we were going to pass Part D. … It’s worked out fine. Republicans were too dumb to take credit for it. Most Democrats like it.

You need to raise the retirement age to 67. … The retirement age of Social Security is 66 now [67 for those born after 1959]. Nobody noticed because it happened one [month] at a time for 12 years. You need to do the same thing for Medicare. You need to gradually move it to a premium support model so it looks more like the Federal Employee Retirement Program. You’re not limiting spending. You’re putting it under some kind of a rational, non-open ended fee-for-service entitlement. That’s going to have to happen.

Q: What is the scenario if Mitt Romney becomes president?

If Gov. Romney becomes president, and you have a Republican Senate and a Republican House, they may do so much that they’re in for two years then blow themselves up. They will cut spending, they will move to premium support, and they will do some radical stuff on the entitlement side. I don’t think they’ll block grant Medicaid, but what’s a block grant? It’s a waiver. You’ve got 27 states with waivers and they’ll waive everybody and do kind of a per capita program on Medicaid. They’ll move toward premium support. They’ll probably raise the retirement age. There will be a lot of radical change. People may not like it.

Q: And if President Obama remains in the White House?

The other scenario is, if President Obama wins a second term, he realizes that we’ve got a national, fiscal crisis that should have been dealt with a couple of years ago and there’s going to have to be a big deal. And big deals require compromise. I don’t think the relationships are, sadly, what they used to be [on Capitol Hill]. But, if you put [House Ways and Means Committee Chairman Dave Camp, R-Mich.,] who’s a great guy, in a room with [Senate Finance Committee Chairman Max Baucus, D-Mont.,] who’s a great guy, you’d probably get a hell of a good result. … They’re both terrific moderates, very smart, know their stuff. There’s clearly room for a deal if you can get the political support for it.

Ex-Medicare Administrator: Premium Support “Is Going To Have To Happen”