About 200 students earned degrees this year from Georgetown University’s Public Policy Institute, but most of the attention at Friday’s graduation ceremony was focused on one person: Kathleen Sebelius.

The Health and Human Services Secretary gave commencement remarks – with only one major interruption – to a largely supportive audience. 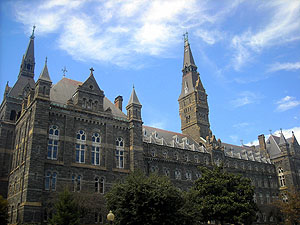 In her speech, Sebelius didn’t directly address the ongoing controversy over the health law’s birth control coverage rule and the opposition it has drawn from the highest ranks of the Catholic church, but she did describe the importance of graduates acting as leaders and following their “own moral compass” as they wade through contentious debates that might involve religion.

“Ultimately, public policy is about making difficult choices,” Sebelius said. “Today, there are serious debates underway about the direction of our country. … People have deeply held beliefs on all sides of these discussions, and you, as public policy leaders, will be called on to help move these debates forward.”

Sebelius was unfazed when an audience member stood up and yelled, “You’re a murderer,” a couple minutes into her speech. Security rapidly removed the man from the ballroom and the secretary continued her remarks.

Institute students invited Sebelius to speak in January, before controversy erupted over the Obama administration’s contraception coverage mandate. In recent weeks, religious groups, including the Archdiocese of Washington, have voiced opposition to her appearance, noting how Georgetown, a religiously affiliated university, will soon have to cover birth control against church policy. Students, faculty and the university president all wrote response letters that supported Sebelius’ visit.

A Catholic herself, the secretary mentioned Friday that she’s also a “Hoya Mom” — with a double-graduate son. In addition, her husband graduated from Georgetown’s law school.

Outside the campus’ main gate, one group opposing Sebelius gathered a little over a dozen protestors, but graduates and their families largely ignored the demonstration.

Sebelius Tells Georgetown Students To Follow Their ‘Own Moral Compass’