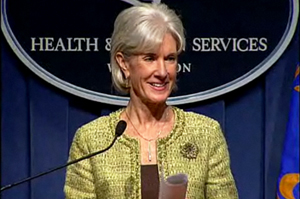 Federal regulators want self-insured employers  who provide health coverage for millions of Americans  to keep young adults up to age 26 on their parents’ plans before the new law requires them to do so.

While dozens of health insurers have announced they will cover young adults in advance of the Sept. 23 deadline in the health overhaul law, self-insured employers do not have to cover them until the beginning of the next health plan year beginning after Sept. 23, which is often Jan. 1.

Department of Health and Human Services and Department of Labor officials are “reaching out to large employer groups asking them to look at an opportunity to open the plans earlier than mandated and make this coverage available,” HHS secretary Kathleen Sebelius said Thursday at a news conference to discuss implementation of the law.

“We believe that it is potentially cost effective to do just that rather than disenrolling young adults and then having to outreach and reenroll them. This may actually be a cost-saver overall.”

Describing a meeting she held earlier Thursday with health insurance executives, Sebelius said they expressed concern “at a market where more and more people are dropping coverage because of the increase in price.I think the insurers seem very aware of the fact that cost control, all of us working together on it, is something that’s going to be very important in these intervening years” before health insurance exchanges begin to operate in 2014. Individuals and small businesses will be able to buy policies in these new insurance marketplaces.

Other highlights of the news conference:

– More than four millions seniors will receive a $250 check between June and the end of the year to help cover prescription drug costs when the hit a gap in coverage known as the “doughnut hole.” The first checks will be mailed out June 10. Seniors do not take any action to receive the check, Sebelius said.

– While HHS has not yet issued guidance on what changes “grandfathered” health plans can make to their plans and retain that status, Sebelius said the goal “is to live up the president’s commitment that if you have a plan that you like you’ll get to keep it. How that balances with some of the new consumer protections and how broadly to draw that regulation is currently what’s being debated.”

– Some of the criticism from congressional Republicans of Donald Berwick, the administration’s nominee to head the Centers for Medicare and Medicaid Services, has “less to do with his qualifications and his leadership abilities and more to do with rehashing some of the arguments those same members made against the passage of legislation in the first place,” Sebelius said.