SACRAMENTO – A California health care workers’ union is collecting signatures to get two measures onto the ballot that it says would lower health care costs.

The union also wants to cap CEO salaries at nonprofit hospitals to $450,000 a year.

“These two [initiatives] in combination will do more to bring down the cost of health care than anything else that’s been considered recently in California or anyplace else,” says SEIU-UHW President Dave Regan. 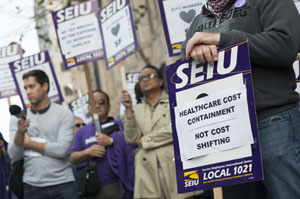 He says hospitals are the biggest driver in health care spending.

“There’s a culture of pricing, and a culture of doing business that has just lent itself to driving the cost of care up,” says Regan.

But the California Hospital Association (CHA) says nobody actually pays the full amount that hospitals charge. Instead, insurers pay negotiated rates that vary, Medicare pays a price it sets, and Medi-Cal, as Medicaid is known in California, pays yet another rate. Medi-Cal’s rates are among the lowest rates paid to hospitals in the country.

“These are very dangerous and deceptive initiatives because they don’t get at the underlying causes of why health care costs rise,” says Jan Emerson Shea, vice president of external affairs at CHA.

She adds that the CEO salaries are justified.

“Running a hospital is the most complex business to run today…Essentially you’re running a city,” she says.

Roby says what hospitals charge is not the same as what they get paid. That’s partly because private insurers typically negotiate prices down, which means hospitals usually bring in less than 25 percent above the actual cost of care.

But Roby says capping what hospitals charge would protect uninsured and underinsured people from being overcharged for a service. He also says it could help bring more transparency to health care pricing.

When it comes to capping CEO pay at nonprofit hospitals, Roby says such a law would not necessarily save the health care system money.

He says the national average for the CEO salary at a nonprofit hospital is about $600,000 a year. But if CEO pay is cut, hospitals might spend the savings to shift the work load somewhere else.

Seventeen Democratic California lawmakers have endorsed the ballot measures. The union expects to finish gathering the necessary 565,000 signatures by the middle of April, to meet a deadline to get the proposals on the November ballot.