STERLING, Va. – Perched by a computer monitor wedged between shelves of cough drops and the pharmacy in a bustling Walmart,  Mohamed Khader taps out answers to questions such as how often he eats vegetables, whether anyone in his family has diabetes and his age. 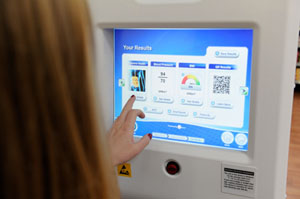 He tests his eyesight, weighs himself and checks his blood pressure as a middle-aged couple watches at the blue-and-white SoloHealth station advertising “free health screenings.”

“You may not go to the doctor every year, but you come to Walmart often,” says the fit-looking 43-year-old Khader who lives in nearby Ashburn, Va.  “I get bored while my wife is shopping. This is a time killer. I’ll come back in two months or so, and track my results.”

A burgeoning consumer health industry is betting that millions of consumers will do just that.

As Americans gain coverage under the federal health law, putting increased demand on primary care doctors and spurring interest in cheaper, more convenient care, unmanned kiosks like these may be part of what their manufacturer bills as a “self-service healthcare revolution.”

From SoloHealth’s stations, slated to be in 2,500 Walmarts and Sam’s Clubs next month, to video consultations with doctors, to smartphone apps that track blood pressure and heart rate, consumer health  technology is attracting big-name backers such as retailer Walmart, health insurers Wellpoint and UnitedHealthcare and companies that make or distribute medical products, such as Johnson & Johnson  and Cardinal Health.

Walmart’s interest is especially significant, given the giant retailer’s  reach, the growth of its pharmacies and retail medical clinics and a top official’s recent statements  — since walked back by the company — outlining plans for a push into primary care.

Some doctors’ groups and consumer advocates urge caution, raising concerns about how companies might use personal health data, the quality of their medical information and whether advertisers and other sponsors might shape their advice and referrals for commercial reasons.

“There is a trend in general by retailers and health insurers to provide ‘fluff’ to consumers in the guise of real medical information as an advertising delivery device,” says Carmen Balber of the left leaning advocacy group Consumer Watchdog.

Walmart spokeswoman Danit Marquardt says the placement of SoloHealth stations in many stores is part of the retailer’s commitment to “testing new products and services and ways to keep customers healthy.”

“We don’t have a larger plan for primary care at this time,” she added. 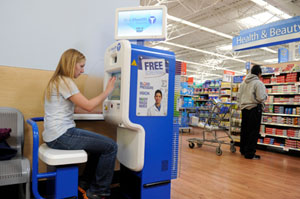 The SoloHealth Station gives consumers free and convenient access to health care by allowing them to screen their vision, blood pressure, weight, and body mass index (BMI) — or any combination of the four–in seven minutes or less for free according to the manufacturer (Photo by Jack Gruber/USA Today).

But SoloHealth’s backers do have larger plans. The Duluth, Ga.-based company aims to expand its kiosk offerings to teach people how to quit smoking, test whether they are at risk for diabetes and even enroll them in health coverage.

Self-serve computer stations are also eyed as a way to help consumers figure out whether they need medications for conditions such as high cholesterol, under a proposal now before the FDA to make some prescription medications over the counter. “It is clear there are now many interactive mechanisms that can step the consumer through the process of self-diagnosis and medication selection,” said Janet Woodcock, director of the FDA’s Center for Drug Evaluation and Research at a public hearing last March. The proposal is still under review.

Rival firms are marketing similar technologies. Dublin-Ohio based HealthSpot has enclosed cubicles that allow patients to pay $59 to $79 for a video “visit” with a doctor. NowClinic online, a subsidiary of UnitedHealth Group, provides 10-minute video chats with physicians for $45.

Technology “has become a new arm of the health care delivery system,” says Jay Sanders, an adjunct professor at Johns Hopkins University and CEO of The Global Telemedicine Group, a consulting firm in McLean, Va. “You need to bring the exam room to where the patient is, not where the doctor is.”

SoloHealth’s founder and CEO Bart Foster saw larger possibilities for automated screening after he began providing Walmart with self-service vision tests as a way to get shoppers from the product aisles to Walmart’s optical shops.

In 2010, the firm got a $1.2 million grant from the National Institutes of Health to develop new approaches to screening for people in underserved communities. It has also received more than $43 million in investments from computer maker Dell Corp., health insurer WellPoint and Coinstar, maker of the Red Box DVD rental boxes, he says.

Today, SoloHealth’s kiosks, which are not connected to a live physician, allow consumers not just to test their eyesight and learn if they are obese, but to get information on diet, vitamins and pain management.  A “find a doctor” function can direct users to nearby doctors, although the one in Sterling listed only “optical doctors” — and those appeared mainly to be Walmart-affiliated.

Foster says SoloHealth has received lists of doctors from sponsors, including Walmart, and also allows doctors to buy a listing. SoloHealth does not do any independent review of doctors’ credentials. About 20 to 30 doctors are typically offered.

Among its programs is one that advises those suffering symptoms of heartburn whether it may indeed be heartburn and which over-the-counter product might be useful, says Stephen Kendig, the firm’s chief commercial officer.

But such programs raise a red flag for some consumer advocates who worry the “advice” might be an advertisement.

The SoloHealth station in Sterling, Va., for example, runs a video for Healthy Choice yogurt while the blood pressure device inflates.   Ads for Nature Made fish oil supplements or Healthy Choice frozen meals appear when consumers respond yes to a written question asking if they want more information about a healthy lifestyle. Others appear for allergy drug Zyrtec and heartburn medication Prilosec.

The ads, which can be targeted to particular consumers based on their answers, are SoloHealth’s revenue model. “Reach customers when they are aisles, not miles, away,” the firm’s message to advertisers on its website says.

Users who enter their email addresses — and about 18 percent do — will receive test results, along with information that might include “ask your doctor about this drug” this or “pick up some Advil on aisle four,” says Foster.  Despite those efforts, every one of the five people who used the kiosk in the space of about an hour, including Khader, said they did not notice the advertising.

“You have a situation where a patient is voluntarily disclosing information, which means there is no privacy protection, generally,” Savage says.  “They may not know if the information is being kept and might be used weeks or years after.”

Solohealth’s Kendig says the firm is not considered a covered entity under the Health Insurance Portability and Accountability Act of 1996, meaning it is not required to meet the law’s privacy standards.  If it shares personal health information with insurers or medical providers, then it would need to meet those standards.

All information, except the email addresses, is aggregated and shared with SoloHealth sponsors without personal identifiers, Foster says. Those who leave their email address can track their test results over time and may be sent more information, including newsletters targeted to specific health conditions.

Consumer Khader did not mention concerns about how his information might be stored and used in the future.  But he did have one suggestion. Turn the machines so the screen cannot be seen by other customers.