The water crisis in Flint, Michigan, is making some public health messages harder to get across — namely, in most communities, the tap water is perfectly safe. And it is so much healthier than sugary drinks.

It’s a message Dr. Patty Braun, a pediatrician and oral health specialist at Denver Health, spends a lot of time on in Denver, even before lead was found in the water system of Flint.

At a downtown clinic, Braun talks to Marlene, a skinny 7-year-old with straight black hair who is getting a pair of fillings. Braun said “over half” of the Latino families she sees don’t drink tap water. And if the kids don’t drink tap water they don’t get the fluoride added to the water to protect their teeth.

Instead of tap water, many children gulp down sugary drinks — a double whammy that can mean more cavities and weight gain. 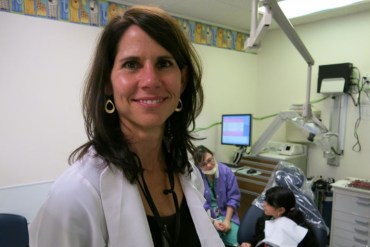 She said in some cases there is a stigma against tap water that has been passed on through generations in a family. In others, recent immigrants hesitate to drink it based on prior experiences with contaminated tap water in their native countries.

“If you’re used to living in a place where you would normally not want to drink the water because it is not safe, then that’s what you’re going to bring over to any other new setting that you live in,” said Braun.

Now there’s a collaborative campaign aimed at letting Latino communities in Colorado know the tap water is safe and clean. The Delta Dental of Colorado Foundation is partnering with a community group called Westwood Unidos to get the word out.

“It was a surprising revelation to us,” said Jessica Mahaffey, marketing specialist with the state’s largest water provider, Denver Water. “Once we discovered that these concerns existed, we felt a strong responsibility to go out and to communicate otherwise.”

Still, the advice to drink tap water in Denver comes with a caveat. Some homes in Denver built before the mid-1950s have lead pipes. (Lead pipes alone do not cause the kind of poisoning happening in Flint, where corrosive river water was not treated properly before it became the city’s water supply.) Denver Water advises that you run tap water until it runs cold to flush any lead-containing water from pipes and get your water tested by a state-certified lab if you have any concerns.

This fall, Mahaffey led a tour of the utility’s infrastructure for about 40 people from the largely Hispanic Westwood neighborhood after learning about rumors that the water was unsafe to drink. The group included community leaders, pastors and educators. 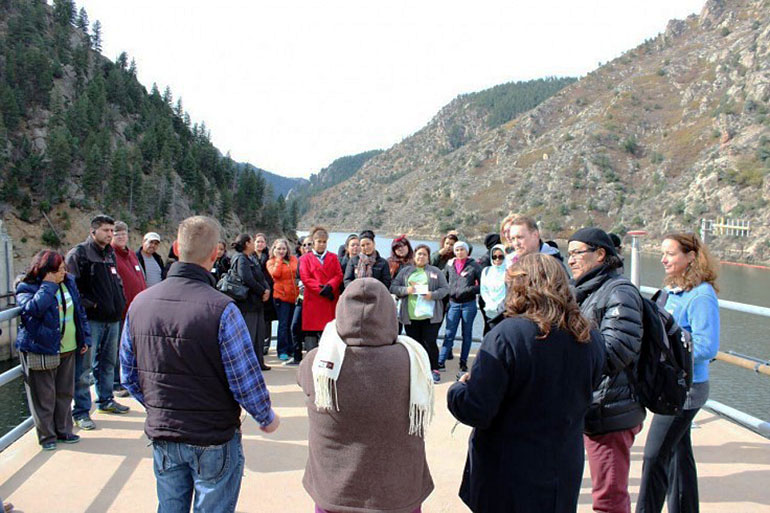 A group of Westwood community leaders visited Denver Water’s Waterton Canyon Reservoir in Oct. 2015 to see first hand the source of some of the city’s water supply. (Courtesy of Cavities Get Around)

“Many of them boil the tap water or buy bottled water, and so they just had a lot of concerns and a lot of questions about the quality and safety of their water,” said Mahaffey.

Mahaffey showed the group the reservoir at Waterton Canyon, filled by melting mountain snow. She then took them to a water treatment plant, so they could see how that water is filtered and tested. “Sometimes it’s much easier to show than it is to tell,” she said.

Westwood resident Gaby Medina said she had a change of heart. Like a lot of her neighbors she didn’t trust the water when she came to U.S. from Mexico more than a decade ago. 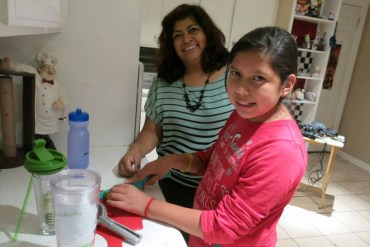 Gaby Medina, seen with her daughter Andrea, initially had doubts about the safety and quality of Denver’s tap water, but now works as a water “promotora” or health educator. (John Daley/CPR News)

“Initially, yes, I was hesitant,” Medina said, speaking through an interpreter. “Very honestly, I didn’t have a lot of faith.”

But she said she started “experimenting,” trying the tap water. Then her dentist suggested she encourage her kids to drink it, saying it would be good for their teeth. Now she’s a full-on tap water convert.

In fact, she’s spreading the message in schools and churches around her community as a “promotora,” a health educator, with the Cavities Get Around campaign. “That really gives me a lot of good feeling and pride,” said Medina.

Rachel Cleaves, coordinator of the campaign in southwest Denver said 30,000 children in Colorado have untreated tooth decay and Hispanic children have the highest rates.

At Medina’s home in Westwood, she shows a visitor a large glass water dispenser that she now brings to community events. She fills it with tap water and slices of fruit. That water has now replaced the kind of sugary beverage that used to be served. Medina’s daughter, 10-year-old Andrea, brings a water bottle with a slice of citrus in it to school with her. And she said the idea is catching on with her friends.

“My friends started taking them,” Andrea said, “because it doesn’t have sugar and water is like the most important thing of your body.”

Andrea’s 11-year-old brother Greg said since his mom started working on what he calls “the water thing,” his fears about tap water have evaporated.

“It comes fresh from the mountains and it’s also refreshing,” said Greg. “Now, I drink water more often than any other drink.”

Pediatrician Patty Braun hopes, despite the Flint news, others will do the same.

“We hope that this doesn’t discourage people from drinking safe water from their tap,” she said. “It’s tragic what’s happened in Flint, but we want other communities to know that water is safe to drink.”

She said those who have any doubts should consult their local or state health department.

This story is part of a reporting partnership with Colorado Public Radio, NPR and Kaiser Health News.

Selling The Health Benefits Of Tap Water, In An Age Of Flint