The Democratic and Republican leaders of two key congressional committees have agreed on a framework to scrap the problematic Medicare payment formula for physicians and replace it with one that would link physician reimbursement to the quality of care provided, a step that could put an end to the annual “doc fix” debate.

The discussion draft released Thursday by the Senate Finance and House Ways and Means committees would do away with the Sustainable Growth Rate, or SGR. That formula, adopted as part of the deficit reduction law in 1997, will reduce Medicare physician payments by nearly 25 percent next Jan. 1 unless Congress intervenes.  Stopping scheduled payment cuts caused by the SGR has become a yearly ritual on Capitol Hill, leading to doctors’ frustration with the system and a growing budget problem because each deferral increases the size and price tag of the next fix. 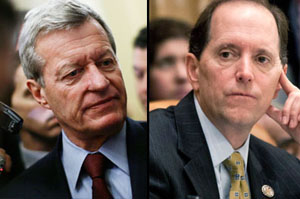 “For years, Medicare payments to doctors have been at risk of getting slashed, limiting seniors’ access to high quality care,” said Senate Finance Committee Chairman Max Baucus, D-Mont. “Enough with the quick fixes. Our proposal is for a new physician payment system that rewards value over volume.”

Providing a permanent solution – rather than the yearly “patches” that have become so familiar – “is vital to ensuring that seniors continue to have access to high quality care,” said House Ways and Means Chairman Dave Camp, R-Mich.

Sen. Orrin Hatch of Utah, the top Republican on the Finance Committee, and Rep. Sander Levin of Michigan, the top Democrat on Ways and Means, have also endorsed the plan.

The proposal would make a historic shift in doctor payments, moving physicians from the traditional system in which they are paid for volume and instead use financial incentives to encourage them to move to alternative payment models emphasizing quality care. The framework would repeal the SGR and hold doctors’ pay at current levels as alternative payment models are developed and tested. It would combine some existing Medicare physician quality programs into a new initiative starting in 2017 that would offer doctors additional pay based on their performance on value-based criteria, such as making more same-day appointments for urgent needs and enhancing their use of electronic medical records.

Providers who receive a significant portion of their annual revenue from an alternative payment model would receive a 5 percent bonus through 2021. Those models could include accountable care organizations, in which doctors and hospitals work together to reduce the cost of care for patients and share in those savings, or a patient-centered medical home, where a primary care practice oversees all the medical needs of its patients and monitors the use of specialists.

The proposal would also create a process to ensure accurate payment for provider services, reward care coordination for patients with multiple chronic conditions and introduce physician-developed care guidelines to reduce “inappropriate care that harms patients,” according to a summary.

In addition, physicians and patients would have access to more data on quality and use of medical services in Medicare.

Linking physician payment to the quality of service provided – rather than the quantity – is also a goal of the Affordable Care Act. The Finance and Ways and Means plan hopes to encourage physicians to move sooner to those new payment models, such as ACOs.

Finance staff said Baucus wants to move the SGR legislation by the end of the year and avoid another short-term patch, but that may prove ambitious due to the dwindling number of legislative days left on the congressional calendar and the potential difficulty of finding ways to finance the legislation.

Yet the fact that Democrats and Republicans have agreed in two chambers on proposals to replace the SGR – in particular amid a bitter partisan battle over the health care law and its flawed rollout  — is significant and could speed its consideration on Capitol Hill.

The Congressional Budget Office has reduced its estimate of repealing the SGR to $139 billion over the next decade and lawmakers in both parties are eager to take advantage of that opportunity. Previous estimates to scrap the SGR were as high as $316 billion over 10 years.

Earlier this year the House Energy and Commerce Committee voted unanimously to approve a SGR repeal that, among its provisions, would give physicians a 0.5 percent payment increase from 2014 through  2018. Starting in 2019, providers would receive that 0.5 percent update but could receive additional payments if they met specific quality measures and clinical practice improvement activities.

The American Medical Association praised the draft from Finance and Ways and Means.

“Building on the strong foundation laid this summer by the House Energy and Commerce Committee, the framework … is an encouraging development and represents a pivotal step toward stabilizing and improving the Medicare program on behalf of America’s seniors and physicians,” said AMA President Ardis D. Hoven.

“Congress is demonstrating that they understand that ending the failed SGR this year is fiscally responsible, and that the current Medicare payment system is a barrier to adoption of health care delivery and payment reforms that will improve health care for America’s seniors and rein in overall costs,” she said.

The committees are taking comments on the proposal through Nov. 12.