The Senate passed the first major mental health legislation in nearly a decade, sending the 21st Century Cures Act to President Barack Obama, who has promised to sign it.

The Senate voted 94-5 to approve the act, which sailed through the House of Representatives last week. Although the 21st Century Cures Act has been championed as a way to speed up drug development, it also includes provisions aimed at improving mental health care for millions of Americans and fighting the opioid epidemic. Mental health advocates have described it as the most significant piece of mental health legislation since the 2008 law requiring equal insurance coverage for mental and physical health.

The new legislation places a strong emphasis on science, pushing federal agencies to fund only programs that are backed by solid research and to collect data on whether patients are actually helped. The bill strengthens laws mandating parity for mental and physical health care and includes grants to increase the number of psychologists and psychiatrists, who are in short supply across the country.

The bill, which combines mental health proposals from several lawmakers, also pushes states to provide early intervention for psychosis, a treatment program that has been hailed as one of the most promising mental health developments in decades. 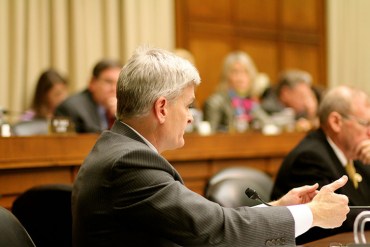 “It is time to fix our broken mental health care system,” said Sen. Bill Cassidy, R-La., a physician whose mental health bill was folded into the 21st Century Cures Act.

Sen. Chris Murphy, D-Conn., who worked with Cassidy on the bill, said he hopes to alleviate the suffering of people with serious mental illness.

“I’d heard too many devastating stories of people struggling with serious mental illness and addiction whose lives were forever changed because they couldn’t get the care they need,” Murphy said. “I’d seen up close the heartbreak and frustration that families suffered trying to find care for a loved one — care that seemed impossible to find and even harder to pay for.”

But Rep. Frank Pallone, D-N.J., said he’s concerned that proposed Republican changes to the health care system could undercut any progress made by the bill. Millions of Americans with mental illness could lose coverage if Congress repeals the Affordable Care Act or cuts spending on Medicaid, which pays for about 25 percent of all mental health care, he said.

“The benefits of the mental health bill will be far outweighed by the catastrophic harm caused to individuals with mental illness if the Republicans move forward with their radical plans to repeal the Affordable Care Act, block grant Medicaid and cut benefits for low-income individuals,” Pallone said.

Ronald Honberg, national director of policy and legal affairs at the National Alliance on Mental Illness, called the bill’s mental health provisions “necessary and promising.” He said he appreciated the bill’s focus on “preventing the most horrific consequences of untreated mental illness,” including homelessness, incarceration and suicide.

The bill generally requires states to use at least 10 percent of their mental health block grants on early intervention for psychosis, using a model called coordinated specialty care, which provides a team of specialists to provide psychotherapy, medication, education and support for patients’ families, as well as services to help young people stay in school or their jobs. Research from the National Institutes of Health shows that people who receive this kind of care stay in treatment longer; have greater improvement in their symptoms, personal relationships and quality of life; and are more involved in work or school compared to people who receive standard care.

The bill also sets up a $5 million grant program to provide assertive community treatment, one of the most successful strategies for helping people with serious mental illnesses, such as schizophrenia. Like the early intervention program, assertive community treatment provides a team of professionals that is on call 24 hours a day. The bill also expands a grant program for assisted outpatient treatment, which provides court-ordered care for people with serious mental illness who might otherwise not seek help.

Although the bill authorizes these grants, a future Congress would have to approve funding for the programs. “The fact that a program has been authorized is no guarantee that it will be funded,” Honberg said. “It’s a necessary first step.”

Mental health advocates will lobby for Congress to approve funding for the most critical programs, Honberg said.

While funding treatments for mental illness is expensive, “it’s more expensive to ignore it,” said Rep. Eddie Bernice Johnson, D-Texas, who co-sponsored mental health legislation in the House that folded into the 21st Century Cures Act.

Other sections of the bill, based on legislation introduced by Sen. John Cornyn, R-Texas, give communities more flexibility in how they use federal grants. For example, communities could use community policing grants to train law enforcement officers to deal with patients in the midst of a psychiatric crisis. Another provision would require the U.S. attorney general to create at least one drug and mental health court pilot program, which would aim to help people with mental illness or drug addiction receive treatment, rather than jail time, after committing minor offenses.

The legislation will help “those suffering from mental illness in the criminal justice system can begin to recover and get the help they need instead of just getting sicker and sicker,” Cornyn said. “This bill also encourages the creation of crisis intervention teams, so that our law enforcement officers and first responders can know how to deescalate dangerous confrontations. This is about finding ways to help the mentally ill individual get help while keeping the community safe at the same time.”

The mental health provisions have been scaled back significantly since they were first introduced.

An earlier version of a bill introduced in the House of Representatives would have changed a federal privacy law to allow doctors, under certain circumstances, to share mentally ill patients’ medical information with their family caregivers. Doctors today often shut families out of their loved one’s care, refusing to share even basic information, such as appointment times, for fear of violating the Health Insurance Portability and Accountability Act, or HIPAA.

Many health professionals misunderstand HIPAA, refusing to listen to the families of patients who are too disabled by psychosis to provide key details of their medical history, said Rep. Tim Murphy, R-Pa., who first introduced the House bill in 2013 in response to the shootings at Sandy Hook Elementary School in Newtown, Conn.

Some advocates for the disabled objected to that change, however, arguing that patient privacy is essential, and that people might avoid care if they believe their doctors might disclose confidential information.

The new bill instructs the secretary of the Department of Health and Human Services to clarify when doctors can share patients’ medical information with family caregivers, as well as educate health care providers about what the law actually says.

“It’s a step in the right direction,” Honberg said. “There is so much misinformation about HIPAA. It’s one of the most mischaracterized laws out there.”

Chris Murphy said he wishes the final bill had included more resources for outpatient mental health care, as well as inpatient hospital bills for people in psychiatric crisis. He also said the current bill provides a starting point but that he hopes Congress will continue working to improve mental health care in its next session.

“This doesn’t solve all the problems in the mental health system,” said Chris Murphy, noting that Congress may still need to change the HIPAA law to allow families to better care for people with mental illness. “We may still have to look at this down the line.”