Most of the momentum in fights over birth control and abortion has been in the direction of opponents of late. But you wouldn’t know that by watching the U.S. Senate.

Democrats who control the chamber have scheduled a vote for Wednesday on a bill that would effectively reverse the Supreme Court’s Hobby Lobby ruling regarding contraceptive requirements in the Affordable Care Act. And on Tuesday the Judiciary Committee heard testimony on a separate, sweeping measure that would invalidate many state abortion restrictions. 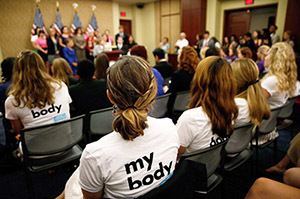 Republicans accused Democrats of using the bills as a political wedge in advance of the mid-term elections in November. Democrats did not deny political intentions.

The vote Wednesday is on legislation introduced in the wake of the Supreme Court’s ruling that the Religious Freedom Restoration Act can shield “closely held corporations” with religious objections from having to offer contraceptive coverage.

The “Protect Women’s Health From Corporate Interference Act of 2014” stipulates that any employer that offers group health insurance “shall not deny coverage of a specific health care item or service” that is required by federal law or regulation. The bill specifies (as do the regulations for the Affordable Care Act) that houses of worship are exempt and “religiously affiliated nonprofit organizations with objections to contraceptive coverage” will be provided an accommodation.

“Women are tired of being targeted and are looking to Congress to right this wrong by the Supreme Court,” Sen. Patty Murray, D-Wash., the bill’s sponsor, said  on the Senate floor Monday.

Also unlikely to get to the president’s desk, at least this year, is the “Women’s Health Protection Act,” which got a hearing before the Judiciary Committee.

“The reason for this bill is the cascading avalanche of restrictions on reproductive health care around the country,” said Sen. Richard Blumenthal, D-Conn., who sponsored the bill and chaired the hearing. “More than half the states now have these unwarranted and unconstitutional restrictions.”

Those state laws and regulations – more than 200 passed between 2011 and 2013 – are “designed to accomplish by the pen what could not be accomplished through brute force: the closure of facilities providing essential reproductive health care to the women of this country,” Nancy Northup of the Center for Reproductive Rights testified.

But abortion opponents complain that the bill is so sweeping it would also eliminate, in the words of Sen. Ted Cruz, R-Texas, “commonsense restrictions the majority of Americans support.”

Sen. Charles Grassley, R-Iowa, complained that if the bill passed, “the law that helped convict Kermit Gosnell would be wiped away.” Gosnell is the Pennsylvania abortion doctor convicted of murder in 2013 in the deaths of three babies and one of his female patients.

Rep. Diane Black, R-Tenn., said there are good reasons to single out abortion separately from other medical procedures. “Abortion is brutal to both the mother and unborn child,” she said. “It is not health care.”

Among those restrictions that should be kept, testified Dr. Monique Chireau, an obstetrician and gynecologist at Duke University, are laws requiring doctors who perform abortions to have admitting privileges at nearby hospitals.

“Admitting privileges imply a level of competence,” she told the committee. “When physicians cannot get privileges there’s often a reason why,” such as a trail of malpractice problems.

But that’s not always true, testified Dr. Willie Parker, an OB/GYN who provides services at the last remaining abortion clinic in Mississippi. Under a new state law, Parker tried to obtain privileges, he said, and “many (hospitals) declined to evaluate my application.”