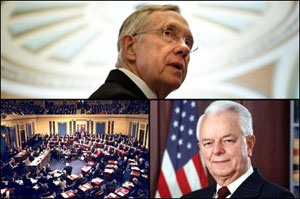 Majority Leader Harry Reid will manage the Senate debate on the reconciliation bill this week. KHN defines some of the key concepts, including the rule named after Sen. Robert Byrd, D-W.Va.

These are some of the less-than-elegant phrases being tossed around the halls of Congress now that the House has approved a $940 billion health care package.

The main piece of the package, the underlying Senate bill, will be sent to President Barack Obama for his signature. The other piece  a reconciliation bill that would make several changes to the new law — goes back to the Senate.

Senate debate could start as early as Tuesday and conclude before Congress adjourns for a two-week recess scheduled to start Friday night.

The reconciliation process, which will be used by Senate Democrats to try to pass the bill, restricts floor debate to 20 hours and requires 51 votes for passage rather than the 60 needed to break a filibuster.

Republicans are mining the rules on reconciliation to find ways to strip out provisions of the bill to gut the legislation or, at the very least, change it so that it has to go back to the House. If that happens, Republicans figure, House Democratic leaders won’t be able to muster the votes they need to pass the legislation yet again.

As the Senate takes up the reconciliation bill, here’s a guide to terms and what they mean:

Byrd rule: Named for its author, West Virginia Democrat Robert Byrd, this rule requires that all provisions in a reconciliation bill deal with revenues or spending. Democrats and Republicans have been meeting  separately — with Senate Parliamentarian Alan Frumin to determine which elements of the reconciliation bill would likely violate the Byrd rule.

This pre-debate scrubbing process is sometimes called the “Byrd bath,” with any provisions removed from the measure known as “Byrd droppings.” Democrats are hoping to keep the legislation intact, while Republicans want to delete key provisions, turning it into “Swiss cheese.”

Sen. Tom Coburn, R-Okla., predicts that Republicans will prevail in their attempts to alter the bill. “The reconciliation package will end up going back to the House because it’s going to be changed significantly,” he said.

Point of Order: Even if a provision survives the “Byrd bath,” Republicans can raise a budget point of order once the bill hits the floor. If the chamber’s presiding officer, who will be a Democratic senator, dismisses it, Republicans would have to muster 60 votes to overrule the ruling from the chair. Republicans control only 41 votes compared to the Democrats’ 59.

“Cadillac” Tax: One provision that will surely be challenged by Republicans is the excise tax that would be imposed on some high-cost health insurance plans beginning in 2018.

Republicans have planned a two-pronged attack: First, they’ll argue that the tax, which doesn’t take effect until 2018, violates the budget resolution, which sets the rules for the process, because it’s outside the resolution’s five-year budget window.

Second, Republicans say, they’ll argue that the provision should be stricken because of its impact on Social Security. Here’s their argument: The Cadillac tax in the Senate bill could increase revenues for Social Security. That would happen if employers, seeking to avoid the Cadillac tax, shifted money from health plans to workers’ wages. The higher wages would be subject to the Social Security tax.

If the Republicans win on that point of order, the measure could no longer be protected by budget reconciliation rules, meaning that Democrats would need 60 votes to pass the legislation.

“At this point that is sort of the nuclear device that takes the whole thing down,” said J. David Hoppe, president of the firm Quinn Gillespie & Associates. He was chief of staff for former Senate Majority Leader Trent Lott, R-Miss.

Jim Manley, a spokesman for Senate Majority Leader Harry Reid, D-Nev., said Democrats are confident they will be able to defeat a point of order against the Cadillac tax.

Senate Budget Committee Chairman Kent Conrad, D-N.D., said that while Democrats will overcome challenges to the Cadillac tax, some other elements might be stripped out as a result of Republican objections.

“Will there be things that are challenged that still may come out? Yeah. I think you just have to say the odds are there will be some additional things that come out but they will have little impact on the main policy thrust of the legislation or its cost,” Conrad predicted.

Vote-A-Rama: During the 20 hours of debate on the reconciliation bill, Republicans can offer amendments for debate. Once the 20 hours are up, senators may continue to offer amendments but they are not debatable. Enter a marathon voting session known as the vote-a-rama. The number of amendments offered during this period is unlimited and need just 51 votes to pass. Senators must stay on the floor because the votes happen in rapid succession. Depending on how long this goes, tempers may grow short because senators may not relish the thought of spending hours on the floor.

Expect Republicans to offer plenty of amendments that put Democrats in an uncomfortable spot. Any changes  even ones that Democrats might like to support  would send the reconciliation package back to the House rather than to Obama for signing, so Democrats are likely to oppose them. Republicans are likely to force a vote on the requirement that most people have insurance or pay a penalty, and on cuts in Medicare spending, among other issues.

If the parliamentarian rules that Republicans, by offering numerous amendments, are simply trying to derail the normal operations of the Senate, the GOP could be shut down. But Coburn doubts that will happen. “Any amendments we offer are going to be pertinent and explain the defects in the bill,” he said.

Gregg said that Republicans would “take advantage of our rights to amend the bill and that might take a while.”

Still, if the outcome of the bill is clear, senators might change their minds about how many amendments they will actually offer, said Kevin D. Kayes, who was an assistant Senate floor parliamentarian for more than a decade, serving under both Republicans and Democrats . He was previously chief counsel to Reid and is now a director at Quinn Gillespie.

“There’s often a lot of talk before you get to the floor” about the number of amendments that senators might offer, he says. But in reality, “it’s not that much fun out there offering amendments that you know are going to fail to a bill that everyone knows will pass.”

How The Senate Will Tackle Health Reform Now