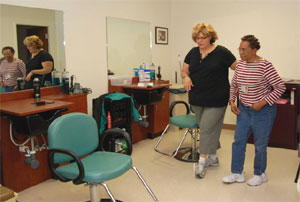 Hairdresser Laura Chicazolla and Delores Muse in Senior Care. Advocates for adult day care programs are pushing to include them in federal health overhaul legislation and lobbying to keep centers from shutting their doors. (Lauren Shay Lavin/KHN)

“Scrunch your face up like a raisin, and then open your jaw and stick out your tongue and go aaahhhh,” says the yoga instructor. Her four students, one in a wheelchair, break into giggles.

Until March 2008, Muse was an active 59-year-old, working full time as a secretary. Then she suffered a major stroke and ended up in the hospital for a week and a rehab facility for a month.

Advocates for adult day care have supported several bills in Congress that would expand services:

Her only child, Jameel, moved back into her house in West Orange, N.J., to help care for her. Afraid to leave her alone because of lingering cognitive deficits, Jameel, a 34-year-old financial analyst in Manhattan, tried to work from home but found it so difficult he feared he might have to move his mother to a nursing home.

Instead, he enrolled her in Senior Care, where she spends four days a week doing art projects and word puzzles, walking with friends and listening to visiting musicians. A van picks her up each morning and takes her home at the end of the day. The center’s nurses measure out medications, monitor their clients’ vital signs, arrange for them to be ferried to physical therapy appointments, and work with the staff nutritionist to tailor their meals.

But adult day care may soon become harder to find and afford. The almost 4,000 state-licensed centers around the country rely heavily on funding from state legislatures and charities, which have been hit hard by the recession. Advocates for adult day-care programs are pushing to include them in federal health-care overhaul legislation while also lobbying state legislatures and suing state regulators to keep centers from shutting their doors.

“Governors are scrambling to reduce deficits, and they’re going after the programs that aren’t mandated by law,” says Sara Myers, managing director of the National Adult Day Services Association, based in Seattle. “Adult day is optional.”

Adult day programs began multiplying in the 1970s, when state and federal laws expanded funding for community-based services for people with disabilities, chronic disease or cognitive impairment. Although the programs vary greatly, most provide social and medical services, as does Senior Care, a nonprofit center serving about 130 clients ranging in age from the 50s through the 90s. Clients are referred by social service agencies, Medicaid case managers, rehab facilities and senior centers. Some programs open early and stay open late, and even operate on weekends, to accommodate the work schedules of family caregivers.

Not only do adult day services keep caregivers in the workforce, advocates say, they also provide a cost-effective alternative to a nursing home, which runs an average of $198 a day for a semi-private room, or to a home-health aide, at $21 an hour.

By contrast, a full day at an adult day center, on average, costs $67, according to the 2009 MetLife Mature Market Institute survey (.pdf). But that number conceals wide regional variations, with average prices ranging from $27 a day in Montgomery, Ala., to $150 in Vermont. In the District, the average is $96. Senior Care, which Delores Muse attends, charges $90 a day.

Nationwide, 35 percent of those expenses is paid out of pocket by participants. Much of the rest is financed by state Medicaid and local programs and federal sources including the Older Americans Act and programs run by the Agriculture and Veterans Affairs departments. Foundations and charities chip in, too.

But reliance on public funding for adult day-care services has made them vulnerable. In Washington state, a lawsuit has warded off a move to deny adult day services to residents of state-funded residential care homes. In California, lawsuits by community service advocates thwarted a cut in the Medicaid reimbursement rate and a move to limit attendance to three days a week. Minnesota decreased its reimbursement rate and made eligibility requirements more restrictive. New York, Illinois and other states are also pursuing reductions. 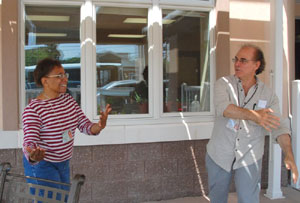 New Jersey has cut Medicaid reimbursement by $8 per participant per day, and administrators at Montclair’s Senior Care fear more cuts in public funds. Emma Justice, the center’s marketing director, says, “We’ve been hit hard.” To sustain its programs, Senior Care has decided to sell the airy building it designed and moved into just five years ago; it hopes a buyer will pay $3.5 million. After the sale, Senior Care will realize substantial savings by renting space from the local Salvation Army.

The grim situation with state budgets has added urgency to efforts to include funding for expanded adult day services and other community long-term care programs in whatever health-care reform package emerges from Congress. Organizations such as the American Association of Homes and Services for the Aging, the National Adult Day Services Association and the National Council on Aging are pushing several bills and amendments that would let states expand access to adult day-care services with Medicaid dollars.

Underlying those efforts is the premise that adult day care provides a way to keep seniors out of costly nursing homes. With the Obama administration intent on cutting health-care costs, “we need to make the case that use of adult day services prevents the use of more expensive health care,” Myers says. But proving that has turned out to be surprisingly difficult, partly because the thousands of programs around the country vary considerably, as does the number of days of clients’ participation.

A recent University of Illinois study found that states that spent more per capita for home and community services, which include adult day programs, experience reduced nursing home use among the childless elderly. And in February, a study published in the Gerontologist, a journal published by the Gerontological Society of America, reported that daughters and daughters-in-law who use adult day centers to care for cognitively impaired parents delayed placing them in nursing homes by an average of 60 days.

But the study also found that wives using day programs placed their husbands in nursing homes earlier than did women whose spouses weren’t in day programs.

“Wives often wait until they are nearly exhausted before they use adult day programs, so it is probably too late to make a difference,” Zarit says. “Use of adult day services in a more timely way might help wives delay placement.”

Health benefits also have been hard to nail down. People with dementia who attend day care sleep better at night, thus making life easier for their caregivers, according to another study led by Zarit. And in preliminary results from a study of six adult day programs in Ohio, Holly Dabelko-Schoeny, an assistant professor of social work at Ohio State University, found a significant decrease in levels of anxiety among clients, a result that could affect their physical health, mobility and interactions with others.

That may be because at day centers, “you’re not sitting on your tush in a darkened room with a TV all day,” explains Ruth Rothbart-Mayer, director of social services at Senior Care. The center’s clients take field trips, plant gardens, practice tai chi. The social interaction and activity, Rothbart-Mayer says, help ward off depression, which is common among the elderly. 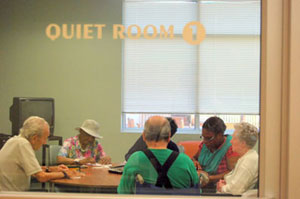 More solidly established are the benefits to family members when relatives with dementia attend adult day programs. “Caregivers report less subjective stress, things like overload – having more to do in a day than you can possibly get done,” says Zarit. “We’ve also seen improvements in overall well-being. Depression decreases. Feelings of anger decrease.”

That matters for more than humanitarian reasons: Programs that make it easier for families to keep loved ones at home — and out of institutions largely supported by Medicare and Medicaid — are an easier sell to policymakers. Moreover, productivity suffers when family members are the sole support for their elderly relatives; a 1999 MetLife study documents that overwhelmed caregivers may arrive at work late or leave early, cut their hours or turn down promotions; a few relinquish their jobs altogether.

Angela Segal, an administrator at an international law firm, worried that her mother, 85-year-old Angelina Tacoma, wasn’t coping well in her senior apartment, even with home-care aides. Because Tacoma has Parkinson’s disease and her balance is poor, she was falling; she also suffered from depression, anxiety and symptoms of early dementia.

Segal enrolled her mother in Senior Care and says the social stimulation and nurses’ monitoring have improved her mother’s health. “Her doctors are so pleased with how well she’s doing,” she says.

Senior Care’s weekly poetry workshop for the more cognitively intact clients begins one morning with “Stopping by Woods on a Snowy Evening.” Local poet Denise Rue plays a recording of Robert Frost reciting his poem, then coaxes her students into a discussion. The darkness. The little horse. The miles to go.

A few people listen and say little. But other seniors jump in with their responses. “There’s no end to it; life keeps moving,” one man offers. “With all the ups and downs, you keep moving.”