Hoping to jump-start a discussion about the well-being of America’s rapidly-growing aging population, the United Health Foundation on Wednesday published the first comprehensive state-by-state analysis of senior health across the nation.

Minnesota won the top spot on the list of healthiest states for seniors to live, followed by Vermont, New Hampshire, Massachusetts and Iowa.  Bringing up the rear, Mississippi was found to be the unhealthiest state for older adults, with Oklahoma, Louisiana, West Virginia and Arkansas following, in that order.

The report is meant to become a benchmark for future efforts to evaluate the health of the nation’s fastest growing demographic group – adults 65 and older. Currently, 40.3 million people fall in this category;  that number is set to soar to 88.5 million by 2050. 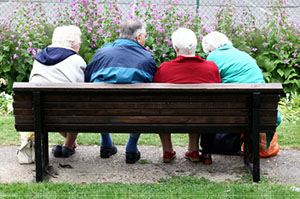 “I think it will be a useful tool for states to examine their preparedness and progress in providing needed services to our growing older population,” said James Firman, president of the National Council on Aging.

Several findings are sobering, although not altogether new.  Notably, only 38.4  percent of older adults  rated their health as “very good or excellent” in 2011. One in every five seniors said they did not get sufficient social and emotional support, putting them at risk of isolation and loneliness, conditions known to have an adverse impact on older adults’ health.

About one of every seven older adults face the threat of hunger; almost one in eight in nursing homes could live in the community if better community supports were available.

“We hope this report will be a call to action for people and that people will use the data to identify challenges in their states and, even more important, mobilize the full range of local resources and assets to address these challenges,” said Dr. Reed Tuckson, senior advisor to United Health Foundation.

“Government cannot do this alone; that is impossible,” he continued. “We need businesses, the philanthropic sector, community-based organizations, families and individuals to all work together.”

Recognizing that solutions will differ in various states, the report steers clear of recommending specific actions but invites readers to share information about innovative programs that will be posted on America’s Health Rankings web site.

The lack of concrete suggestions left Dr. William Dale, chief of geriatrics and palliative medicine at University of Chicago Medicine, at a bit of a loss.  “If this study generates conversation, that would be great, but I didn’t feel like I knew what to do with it – what policies work and what changes should be made,” he said.

Complicating the picture is the fact that budget cuts for programs serving seniors are a stark reality in Illinois as well as other states.

Overall rankings in the report are based on a composite score of 34 measures of senior health, with data drawn from more than a dozen government agencies and organizations such as the Dartmouth Atlas Project and the Commonwealth Fund.

The measures reflect a broad view of health as encompassing individual behaviors (for instance, smoking and chronic alcohol consumption), the environments in which older adults live (e.g., the extent of poverty and funding for community supports), public policies (e.g., the availability of geriatricians and the extent of drug coverage for seniors), and clinical care and the delivery of health care services (e.g., the number of preventable hospitalizations and hospital readmissions for seniors).

“I believe that if we want to get serious about improving the welfare of older people, we have to get serious about measuring their health,” said Dr. Kenneth Covinsky, a geriatrician and professor of medicine at the University of California, San Francisco.  That said, the “big limitation is you can only report what’s being measured.”

Covinsky said he would have liked more information about older adults’ functional status – the extent to which they can accomplish activities of daily living like bathing, dressing, paying bills or cooking a meal – and the extent to which their needs are addressed once disability sets in.  Also, more robust measures of psychological health would have been welcome, he said.

Enormous variation between states at the top and bottom of various rankings is a key but hardly surprising finding. For instance, community support for poor seniors in Alaska was $8,033 per person, while Nevada spent $283. A measure of the acute shortage of geriatricians – the percent of needed geriatricians who are not available – was only 16.3 percent in Hawaii but 87.3 percent in Montana.

Seniors aren’t generally expected to die in the first decade after they reach the age of 65. Rates of premature death for this group per 100,000 population were 2,558 in Mississippi, compared to 1,425 in Hawaii.  In Illinois, seniors reported three poor mental health days per month, double the 1.5 days reported by older adults in Iowa, South Dakota and Hawaii.

One lesson from the report is the importance of systems of care that address the needs of seniors with chronic illness. Nearly 80 percent of the 65-plus population has been diagnosed with at least one such illness; half the population has received a diagnosis of two or more chronic conditions.

“The top states all have strong networks of community organizations that encourage and promote healthy behaviors and, increasingly, link these networks to the clinical care side,” said Firman of the National Council on Aging.