Pressure is mounting for Washington to find a way to avoid the automatic spending reductions set to begin March 1, with President Barack Obama Tuesday urging Congress to stop the “meat-cleaver approach” that he says will undermine U.S. military strength and “eviscerate job creating investments in education and energy and medical research.” 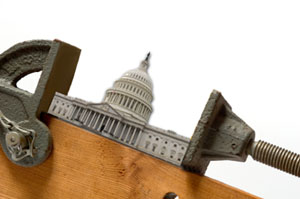 But while both Democrats and Republicans say they don’t want the billions of dollars in cuts to kick in, there’s no agreement on how to stop them.

The nation’s two major health entitlement programs, Medicare and Medicaid, are protected from the bulk of the cuts which will hit a wide swath of federal discretionary spending. Other government programs, including health-related programs, such as medical research, mental health treatment and approvals for new drugs, face reductions of 5 percent or more, according to the Congressional Budget Office.

“These cuts are not smart. They are not fair. They will hurt our economy,” Obama said Tuesday, standing before a group of emergency responders gathered at the White House. House Speaker John Boehner, R-Ohio, said Obama’s “campaign-style event” did little to resolve the dispute. “To keep these first responders on the job, what other spending is the president willing to cut?” Boehner asked in a statement.

Democrats are demanding hearings on the impact of the reductions, and representatives of the medical research community, as well as patient advocates and other health experts, say Congress must find a way to stop the automatic spending cuts.

“These are programs that are not bloated right now,” said Maura Calsyn, associate director of health policy at the left-leaning Center for American Progress. “They need every last dime to continue their important work in public health and safety. There is a right way and a wrong way to have cost containment, and across-the-board cuts are simply not the right way to do it. It does nothing to address waste or inefficiencies in the system, nor does it reform the system at all.”

Obama and Democrats want more revenue as part of any deal to stop the automatic cuts, known as “sequestration” but Republicans, who accepted tax increases in the Jan. 1 fiscal cliff deal, oppose that. The Senate is expected to vote next week on a $110 billion Democratic plan that includes both new revenues and spending adjustments to postpone the sequester for the rest of the calendar year. Senate Minority Leader Mitch McConnell, R-Ky., said he expects that Republicans will offer their own alternative. The GOP-controlled House of Representatives passed two measures last year that would sidestep the sequester by trimming federal spending in other areas.

The sequester’s $85.3 billion in cuts for fiscal 2013 are part of a larger package of $1.2 trillion in cuts scheduled to occur over the next decade. The upcoming cuts are split evenly between defense and domestic programs.

While the reductions are scheduled to begin March 1 unless Congress intervenes, their full impact likely won’t be felt for weeks. Some lawmakers have suggested that instead of worrying about the sequester’s impact, they should focus on March 27 – when the current law funding much of the federal government’s operations expires.

The automatic cuts would not affect Medicaid, the joint federal-state health program for the poor. Medicare spending would be cut by 2 percent through reductions in payments to hospitals, physicians and other care providers.

But several other health care programs would be hit, according to a White House summary of the sequestration’s effects:

–The National Institutes of Health would be forced to “delay or halt vital scientific projects and make hundreds of fewer research awards,” which means that “several thousand personnel could lose their jobs,” the White House said. Twelve thousand scientists and students would be impacted because the National Science Foundation would offer 1,000 fewer research grants and awards.

–The Food and Drug Administration would be able to do fewer drug approvals and conduct 2,100 fewer inspections at domestic and foreign facilities that manufacture food products.

–Cuts to the Mental Health Block Grant program would mean that 373,000 adults and children would not receive mental health services. “This cut would likely lead to increased hospitalizations, involvement in the criminal justice system and homelessness for these individuals,” according to the White House document.

–Cuts to the AIDS drug assistance program could result in 7,400 fewer patients having access to HIV medications, and the Centers for Disease Control and Prevention could conduct approximately 424,000 fewer HIV tests.

–The Indian Health Service and tribal hospitals and clinics would also be hit by sequestration, with 3,000 fewer inpatient admissions and 804,000 fewer outpatient visits, according to the White House analysis.

While there’s plenty of criticism from all sides of sequestration as a policy, it does focus the country on reducing its debt, said Joseph Antos, a health care expert at the American Enterprise Institute, a conservative think tank. “We can’t continue on without doing something about Medicare spending and federal health spending in general. But as everyone agrees, a sequester is not a policy. It’s a haircut. And there are a lot smarter ways” to reduce spending, he said.

The sequester threat, however, has led to an intensive lobbying campaign by industry and patient advocacy groups. While the cuts to Medicare are limited, hospitals and other medical providers who will be absorbing them argue that the latest reductions are especially difficult because they already sacrificed some of their federal funding in the 2010 health care law.

In a January report, the American Hospital Association noted that hospitals have contributed an average of 28,000 new jobs per month in 2012 and that hospitals employ almost 5.5 million people and support an additional 10 million jobs. “Congress should not overlook the economic contribution of hospitals as it considers further deficit reduction proposals,” association president and chief executive officer Rich Umbdenstock said in a statement.

More than 270 organizations, including Research!America, the Mayo Clinic and Yale School of Medicine, wrote to Capitol Hill earlier this month seeking changes. Among their concerns, they warned that sequestration “will negatively impact U.S. competitiveness just as other nations are aggressively boosting their investments in research and development.”

In addition, more than 300 Alzheimer’s researchers said in a separate letter to the Hill that the cuts would be devastating. “A robust commitment to high-impact Alzheimer’s research is essential if we hope to stop this disease before it destroys the nation’s health and financial well-being,” they wrote to congressional leaders.

The American Medical Association and other medical organizations are also fighting sequestration, urging Congress to take a “more targeted, rational approach that allows careful assessment of how to fulfill its long-term commitment to seniors, uniformed service members and their families, and public health and safety priorities.”

Even if Congress finds a way to stop the cuts, that’s no guarantee that Congress won’t trim agency budgets even more in the yearly appropriations process or as lawmakers seek a larger deal to reduce the deficit.

“The sequester is a better deal if … that’s the only thing that happens,” Antos said. “I think a pretty good bet is that we’re going to get a sequester … but on top of that we’re going to see additional cuts in Medicare.” Medicaid, he and other analysts speculate, is likely to remain off the table.