Medicare providers would see reductions of about $11 billion beginning in January as part of series of automatic spending cuts set to begin next year unless Congress acts to halt them, according to estimates released Friday by the White House Office of Management and Budget. 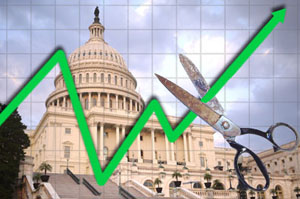 The numbers came in a report that details how federal agencies would implement roughly $110 billion in mandatory, across-the-board budget cuts agreed to by Congress and President Barack Obama last August as a way to end a bitterly partisan dispute over raising the debt ceiling.  Lawmakers in both chambers, as well as Obama, want to avoid the automatic cuts that would trim federal spending by $2.1 trillion over the next 10 years, called sequestration.

Noting that “sequestration would have a devastating impact on important defense and nondefense programs,” the administration detailed cuts to more than 1,200 federal government budget accounts. Half the cuts would come from military programs. Social security and Medicaid are exempted.

“The sequestration itself was never intended to be implemented,” the Office of Management and Budget said in the report. “The Administration strongly believes that sequestration is bad policy, and that Congress can and should take action to avoid it by passing a comprehensive and balanced deficit reduction package.”

In the case of the cuts to Medicare, seniors would see no changes in their benefits, but providers, including doctors and hospitals, would see an across-the-board 2 percent cut to reimbursements. An estimated 496,000 health care jobs would be lost during the first year of cuts, according to a report funded by doctors, hospitals and nurses groups.

More on the cuts:

Here are other resources on the sequestration:

Hospitals would bear the largest share of the cuts. The Federal Hospital Insurance Trust Fund would be reduced by about $5.8 billion, while the National Institutes of Health would see a $2.5 billion reduction. The Centers for Disease Control and Prevention would face cuts of $490 million, and the Food and Drug administration would see reductions of about $318 million.

In addition, the National Institutes of Health “would have to halt or curtail scientific research, including needed research into cancer and childhood diseases,” the report states.

Lawmakers could still act to stop the cuts if they think doing so is in their best interests. In order to avoid a government shutdown in the middle of election season, party leaders in both chambers just cut a deal to prevent the government from running out of money when the fiscal year ends in September. The House voted yesterday to approve the six-month package and  the Senate is expected to send it to Obama next week.

Despite House Speaker John Boehner’s comments to the contrary – he said earlier this week he was “not confident at all” that Congress could cut a deal to avoid the automatic cuts in January – many analysts believe that lawmakers will pass a temporary reprieve because the cuts are disliked so much by both parties.