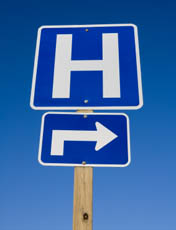 These hospitals all had worse readmission rates than the average hospital for heart attack, heart failure and pneumonia patients — the three categories Medicare tracks.

Their rates ranged between 20 percent and 31 percent of patients being readmitted within 30 days of discharge.

Medicare is planning in October 2012 to start withholding reimbursements to hospitals with high readmission rates.  The penalty would start out at one percent of Medicare’s regular reimbursement rates and rise to 3 percent in a few years.

You can look up your local hospital’s rates on Hospital Compare by searching for the hospital’s name and then selecting the “Outcomes of Care” tab for that institution.