Your browser does not support the audio element.

There was drama on the floor of the House of Representatives today. For the 17th time, Congress is on the verge of approving yet another temporary fix to the Medicare physician payment formula. Known as the Sustainable Growth Rate, or the SGR, the formula has repeatedly called for cuts in Medicare physician payments, but every time that deadline comes up, Congress comes through with yet another sort term patch. Legislation the House passed today would stop a 24 percent payment cut scheduled for April 1. Emily Ethridge of CQ Roll Call joins us now with the details. Emily, thanks for being here.

EMILY ETHRIDGE:  Thank you for having me.

MARY AGNES CAREY: There is bipartisan legislation pending that would permanently change the way that Medicare pays physicians, to link those payments closer to the quality of the care that’s provided rather than the quantity of the care. But today’s vote was on a much shorter term patch, one that would stop any payment cuts for a year.

Why did the House take that step?

EMILY ETHRIDGE:  In one word: It’s money. The cost of that long-term bipartisan bill is just too high; it’s about $140 billion over 10 years, and lawmakers are struggling to find an agreement on how to pay for it. They weren’t able to come up with anything that they both agreed on, so they decided to revert to the short-term patch for now.

MARY AGNES CAREY:  The “doc fix” bill was originally scheduled for consideration on the suspension calendar in the House. This is usually reserved for non-controversial matters that require two-thirds votes for passage. But at the last minute, this was switched to a voice vote. How did that happen? 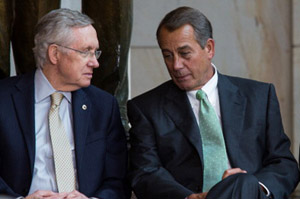 EMILY ETHRIDGE:  Right, it was very surprising. The bill was brought up, and it was debated, and then Republican leaders and some of the members, including some of the members of Republican Doctors Caucus met off the floor.  The House went into recess, and they were meeting off the floor, and staff was meeting, and we were trying to figure out what was going on. And once they emerged from their meeting, about 45 minutes or an hour later, they came back, and all of a sudden the bill was passed by a voice vote. And we heard from a lot of members that they were surprised. They didn’t know that was going to happen, and they thought they were going to take a regular roll call vote on this bill this morning, and it didn’t happen.

MARY AGNES CAREY:  You talked a bit a moment ago about the expense of the larger bill.  How much does this patch cost and how are they going to pay for that?

EMILY ETHRIDGE:  It depends on the budget window you look at. Over 10 years this actually does reduce spending by about $1 billion. But in the next five years it increases spending by $17 billion. So all of these offsets and pay fors really don’t kick in until five years from now, and then within the next five years.  The bill has a variety of pay fors , some are actual payment structure changes to Medicare including to school nursing facilities, and there are some imaging changes. There is also another one of these timing tricks we saw the House do last time it passed a doc fix with the sequester cuts for Medicare. It changes when those cuts under the sequester to Medicare would take place in fiscal 2024, so they actually now happen within the budget window, as opposed to before, they would have happened without the budget window, and you couldn’t count those savings.

MARY AGNES CAREY:  Let’s move to the Senate now. Finance Committee Chairman Ron Wyden, D-Ore., doesn’t like the idea of the short term patch; he says instead we should focus on this larger bill and repeal the SGR. Do other Democrats agree with him? Republicans? Who’s with him; who’s not?

EMILY ETHRIDGE:  Wyden is kind of more out on his own every day. A lot of Democrats and Republicans agree with him in principle, a lot of people support that bill he is trying to bring up, but the fact that he is insisting on that bill and not acknowledging the necessity of the shorter patch that a lot of other lawmakers feel is happening, including Harry Reid, the majority leader. He’s a little bit more out there on his own right now.

MARY AGNES CAREY:  When will the Senate consider this?

EMILY ETHRIDGE:  We have heard from some Senate aides that the Senate is trying to get a deal to pass it today.

MARY AGNES CAREY:  Physician groups, they agree with Wyden. They don’t like this idea of yet another patch. They want the larger bill. It seems as if you’re saying the Senate will move on this tonight.

What does this say about the ability of physician groups to lobby Congress on this issue?

EMILY ETHRIDGE:  It’s very interesting. We’ve had some of the physician groups say that they could not support another short-term patch. They don’t want it, and that may be why some of the Republicans and other lawmakers in the House decided that they didn’t want to vote on this bill today, and why it happened under a voice vote – because no one actually recorded a vote in favor of this bill.

We also heard from some other groups saying: We would prefer the long-term bill. We really want the long-term replacement bill, but we don’t want to be cut, and On Monday their payments would be cut by 24 percent. They said: We’d rather have a short-term patch than feel those cuts.

So you sort of had mixed messages from the provider groups, and that’s why you ended up, maybe, with this weird occasion on the House floor today, where a bill passed, but no one is recorded as technically voting for it.

MARY AGNES CAREY:  With a year patch in place, it seems to undercut momentum for any passage of that larger bill this year.

EMILY ETHRIDGE:  Definitely. That’s what a lot of the provider groups are concerned about — is that it really takes the wind out of the sails. It removes that urgency, now that physicians would have a year of payments set into law and avoiding those cuts.

So they’re really worried: Now was the time. This was the moment to get it done, and if it didn’t happen now, it’s not going to be any easier a year from now. It’s probably not going to happen.

MARY AGNES CAREY:  Thanks for the update Emily Ethridge of CQ Roll Call.