LOS ANGELES — The women sat in a circle and bemoaned their sleepless nights. It seemed unfair: Their babies weren’t even born yet.

Mayra Del Real’s daughter turned somersaults in her belly every few hours. Alexandria Smith lay awake with heartburn. When she wasn’t propped up with every pillow in the house, she was making bleary-eyed trips to the bathroom.

“It’s really priceless — those moments in the middle of the night,” she said. “You get used to it.”

These moms-to-be weren’t just commiserating over coffee. They were at a routine prenatal visit — all five of them at once.

The women are participating in a unique type of health care: shared medical appointments. As a group, they see nurse midwife Mercedes Taha for 10 two-hour visits throughout their pregnancies. They take turns being examined, learn more about childbirth and parenting, and as their due dates approach, celebrate with a joint baby shower.

Group visits like this one at Eisner Pediatric and Family Medical Center in downtown Los Angeles are becoming increasingly common as a way to cut health care costs and improve efficiency. The appointments, for such conditions as diabetes, obesity and liver disease, also ease the shortage of health care providers, especially in low-income communities, and help them avoid repeating the same information throughout the day.

“Group visits have so much to offer busy, backlogged and harried physicians,” said Edward Noffsinger, a Bay Area psychologist and consultant on group visits. “They can get off the treadmill and sit down for one and a half hours with a group of patients.”

The approach has its skeptics, however. Jamie Court, president of the nonprofit Consumer Watchdog based in Santa Monica, California, said educating multiple patients at once may have value, but providing treatment in a group is simply a way to “squeeze the patient and wring costs out of the health care system.”

Patients can’t develop a meaningful relationship with providers in a group setting, he said.

“It is totally cost-driven,” Court said. “When you are sharing your doctor, that’s not better for your health. It is better for the bottom line.”

Smith, a first-time mom, doesn’t see a downside. She has coped better with the roller coaster of hormones since being part of the group, she said.

Research on group visits has been somewhat mixed but several studies have shown they can improve clinical outcomes, reduce costs and leave patients more satisfied. A Health Affairs review published in 2012, based on numerous studies of diabetic group care, found that the visits resulted in fewer hospitalizations and increased productivity among doctors.

Studies of Centering Pregnancy— the same program used in Los Angeles — have found that participants are more likely to breastfeed and less likely to have preterm births than women in individual prenatal care.

Group visits aren’t uniformly covered by insurers, but some plans pay for the care.

Smith, 23, had just learned she was pregnant when she heard about the group visits from a nurse midwife at the Eisner clinic. At first, she worried about discussing her life or exposing her belly in a group of strangers. But she said her boyfriend wasn’t thrilled about becoming a dad and she feared going through the experience on her own.

Mejia, 31, had a different reason for taking part. She’d had one-on-one appointments with her older two children but often felt rushed.

“Basically it was an hour wait for about five minutes that you see the midwife,” said Mejia, a stay-at-home mom.

At each visit, Smith said she learns something new about keeping herself and her baby safe and healthy: that breast milk can help keep infants healthy, that infants shouldn’t sleep with stuffed animals, that there’s a difference between “baby blues” and postpartum depression.

Education is a critical part of the group visits, said Colleen Senterfitt, COO of Centering Healthcare Institute. “One woman’s question is another woman’s question,” she said.

After taking her own blood pressure and checking her weight one day, Smith leaned back on a makeshift bed in the corner of the room and lifted her shirt. As the other women chatted in the circle, the nurse midwife stretched a disposable tape measure over her stomach. She was on track — 35 weeks.

“Is the baby moving?” she asked.

“Yeah, she’s kicking the air out of me,” Smith said.

The midwife ran an ultrasound wand over her stomach and zeroed in on the baby’s heartbeat. Smith smiled. “Sounds great,” Taha said, patting her patient’s hand.

But you’ve gained a little more weight than expected, the midwife said.

“I used to be so careful about what I ate,” Smith said. “But the cravings are really bad.”

“OK, we’ll talk about that,” Taha said. “Maybe others are having the same issue.”

Taha said that the group visits give her more time to both teach and connect with her patients — a contrast to the traditional, rushed appointments that lasts just 15 minutes. (The groups typically include eight to 12 patients, though this group had fewer.) “I really get to know the patients in great depth,” she said. “I feel a little more invested.” 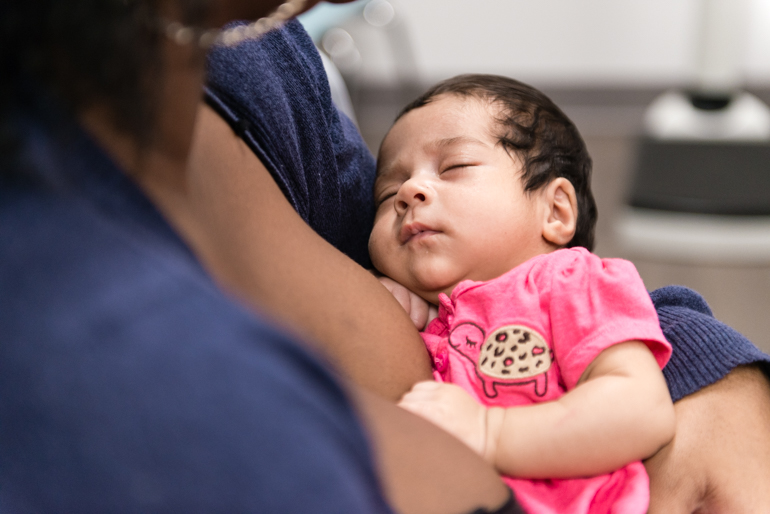 Early Thanksgiving morning, Smith’s contractions came just five minutes apart. Soon after she stood up, her water broke. Though her due date was three weeks away, her body was telling her otherwise.

About 12 hours later, she became the first in the group to give birth. She had a girl, just under 6 pounds. She named her Christianna Nohime Hernandez.

“One of the first things that popped into mind is I need to let all the girls in the group know,” she said.

A few months later, the women gathered for a reunion at the Eisner center. Taha congratulated each of them and they celebrated with chocolate cake as they talked about their babies’ births.

The other women nodded. Then Smith looked at her new friends, each holding their babies in their laps. “But we did it,” she said.

Sharing Your Doctor With A Group