Can corporations shift workers with high medical costs from the company health plan into online insurance exchanges created by the Affordable Care Act? Some employers are considering it, say benefits consultants.

“It’s all over the marketplace,” said Todd Yates, a managing partner at Hill, Chesson & Woody, a North Carolina benefits consulting firm. “Employers are inquiring about it and brokers and consultants are advocating for it.” 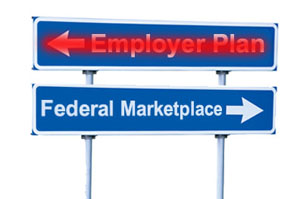 Health spending is driven largely by patients with chronic illness such as diabetes or who undergo expensive procedures such as organ transplants. Since most big corporations are self-insured, shifting even one high-cost member out of the company plan could save the employer hundreds of thousands of dollars a year — while increasing the cost of claims absorbed by the marketplace policy by a similar amount.

And the health law might not prohibit it, opening a door to potential erosion of employer-based coverage.

“Such an employer-dumping strategy can promote the interests of both employers and employees by shifting health care expenses on to the public at large,” wrote two University of Minnesota law professors in a 2010 paper that basically predicted the present interest. The authors were Amy Monahan and Daniel Schwarcz.

Here’s how it might work. The employer shrinks the hospital and doctor network to make the company plan unattractive to those with chronic illness. Or, the employer raises co-payments for drugs needed by the chronically ill, also rendering the plan unattractive and perhaps nudging high-cost workers to examine other options.

At the same time, the employer offers to buy the targeted worker a high-benefit “platinum” plan in the marketplaces. The plan could cost $6,000 or more a year for an individual. But that’s still far less than the $300,000 a year that, say, a hemophilia patient might cost the company.

The employer saves money. The employee gets better coverage. And the health law’s marketplace plan –required to accept all applicants at a fixed price during open enrollment periods — takes on the cost.

“The concept sounds to[o] easy to be true, but the ACA has set up the ability for employers and employees on a voluntary basis to choose a better plan in [the] Individual Marketplace and save a significant amount of money for both!” says promotional material from a company called Managed Exchange Solutions (MES).

“MES works with [the] reinsurer, insurance carrier and other health management organizations to determine [the] most likely candidates for the program.”

“Though we believe it’s legal” as long as employees agree to the change, “it’s still gray,” he said. “We just decided it wasn’t something we wanted to promote.”

Shifting high-risk workers out of employer plans is prohibited for other kinds of taxpayer-supported insurance.

For example, it’s illegal to induce somebody who is working and over 65 to drop company coverage and rely entirely on the government Medicare program for seniors, said Amy Gordon, a benefits lawyer with McDermott Will & Emery. Similarly, employers who dumped high-cost patients into temporary high-risk pools established by the health law are required to repay those workers’ claims to the pools.

“You would think there would be a similar type of provision under the Affordable Care Act” for plans sold through the marketplace portals, Gordon said. “But there currently is not.”

Moving high-cost workers to a marketplace plan would not trigger penalties under the health law as long as an employer offered an affordable companywide plan with minimum coverage, experts said. (Workers cannot use tax credits to help pay exchange-plan premiums in such a case, either.)

Half a dozen benefits experts said they were unaware of specific instances of employers shifting high-cost workers to exchange plans. Spokespeople for AIDS United and the Hemophilia Federation of America, both advocating for patients with expensive, chronic conditions, said they didn’t know of any, either.

“I have gotten probably about half a dozen questions about it in the last month or so from our offices around the country,” says Edward Fensholt, director of compliance for the Lockton Companies, a large insurance broker and benefits consultant. “They’re passing on questions they’re getting from their customers.”

They could also cause resentment among employees who didn’t get a similar deal, Fensholt said.

Hill, Chesson & Woody is not recommending it either.

“Anytime you want to have a conversation with an employee in a secretive, one-off manner, that’s never a good idea,” Yates said. “Something smells bad about that.”