Shingles tried to kill me. Like an insidious invading army, the virus that more commonly causes chickenpox in children attacked the right side of my head, leaving me permanently deaf in my right ear. Shingles almost destroyed my voice box, too, and it caused my right eyelid and lower lip to temporarily droop.

It struck out of nowhere. One day I was in Ocean City, Md., enjoying spring break with my family. The next day, I was knocking on my doctor’s door in agony after feeling as though someone was repeatedly jabbing and twisting a butcher knife inside my head. That pain was actually an acute inflammation of the nerve endings in my eardrum.

Now, five years later, having won my wretched battle with the virus, I have some advice for fellow middle-agers: Get the shingles vaccine. Particularly if you’ve reached the big 5-0.

The shingles shot used to be for folks 60 and up. But a new and more effective vaccine targeting the 50-and-older crowd was approved last month by the Food and Drug Administration and recommended by an advisory panel of the Centers for Disease Control and Prevention. It will begin shipping soon to a pharmacy near you.

The old shot, Zostavax (from Merck), made with the live shingles virus, has been recommended for those 60 and older since its approval more than a decade ago. Given in a single dose, it reduces the risk of developing shingles by 51 percent, says the CDC.

The new vaccine, Shingrix (from GlaxoSmithKline), without live virus, targets folks 50 and up, and in clinical trials posted a 98 percent effective rate for one year and 85 percent for two years, the company says. It is given in two doses.

Shingles will strike 1 in 3 Americans during their lifetimes — most between ages 60 and 70. Folks in their 60s get shingles at roughly twice the rate as folks in their 50s, reports the CDC.

The vaccines are your best armor against the disease that has gradually but steadily increased among Americans, primarily because we are living longer. The new vaccine is expensive: about $280 vs. about $220 for the old vaccine. Insurance providers generally cover the cost, but until now, have mostly limited reimbursements to people 60 and up. That is likely to change with the new vaccine being aimed at younger people.

People should get the vaccine whether or not they recall having had chickenpox because more than 99% of Americans age 40 and older have had chickenpox, even if they don’t remember the episode, says the CDC. 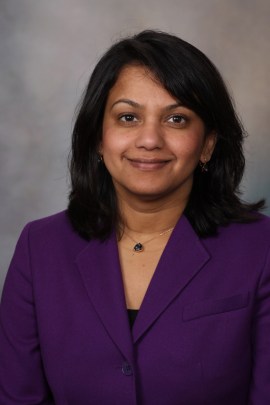 Dr. Priya Sampathkumar, an infectious-disease expert and associate professor of medicine at the Mayo Clinic, advises people to seek treatment for any suspicious rash on the face. (Courtesy of Mayo Clinic)

For most people, the first stage of shingles begins as a slightly painful rash with tiny, clear blisters around the chest or belly. This is when early detection and quick action — seeing a doctor and getting on antiviral drugs and oral corticosteroids — may save days of pain and discomfort. Any suspicious rash on the face should be treated as soon as possible because of the risk of shingles attacking the eye or ear, advises Dr. Priya Sampathkumar, an infectious-disease expert and associate professor of medicine at the Mayo Clinic.

The most common complication of shingles is post-herpetic neuralgia (PHN), severe pain in the areas where the shingles rash occurs. About 1 in 5 people with shingles will get PHN, estimates the CDC. The risk of PHN also increases with age.

I was 59 when shingles sucker-punched me. My head felt like someone had just screwed it into an invisible vise. My body felt too weak to be my own. And my brain had a hard time processing any of this.

But I wasn’t the only one caught off-guard. My doctor did not see the telltale rash that typically comes with shingles because it wasn’t visible. I’m a swimmer and that tiny rash was, at that moment, hidden behind ear-plug-induced earwax. The doctor tried but failed to remove the wax, so she was not able to look fully into my ear. She did not suspect the virus and told me to take ibuprofen three times daily and acetaminophen as needed — and to rest. She failed to diagnose my unconventional form of middle-ear-based shingles that strikes only 2 in 1,000 shingles patients.

Shingles is caused by the herpes zoster virus (no relation to genital herpes). After a bout of chickenpox, the virus stays dormant in your body for decades and reappears when your immune system is likely less robust later in life. Stress also may play a role in the onset, although that’s not medically proven, Sampathkumar says.

Shingles continues to affect me five years after my initial outbreak. For one thing, I’m exhausted, both physically and mentally, by 10 p.m. each night. Even worse, I live with a nonstop, high-pitched ringing in my right ear, a condition known as tinnitus, which I’ve taught myself to ignore.

I’ve also learned how to strategically position myself in a room, car or dinner table so I can hear what’s being said. I’ve learned the delicate art of aiming my left ear toward whomever is speaking — kind of like a cop aiming his radar gun at speeding drivers.

Besides the shingles shot, there are other things that people 50 and older can do to fend off an outbreak. Sampathkumar suggests paying close attention to three fundamentals: ample sleep, regular exercise and good nutrition.

That’s worked for me — for now. Doctors say shingles can return, though it’s unlikely.

At 64, I’m doing everything in my power to make sure that first run-in was also my last.

Shingles: Don’t Let It Get You The Way It Got Me