Doctors’ practices are increasingly trying to reach their patients online. But don’t expect your doctor to “friend” you on Facebook – at least, not just yet.

Physicians generally draw a line: Public professional pages – focused on medicine, similar to those other businesses offer – are catching on. Some might email with patients. But doctors aren’t ready to share vacation photos and other more intimate details with patients, or even to advise them on medication or treatment options via private chats. They’re hesitant to blur the lines between personal lives and professional work and nervous about the privacy issues that could arise in discussing specific medical concerns on most Internet platforms. 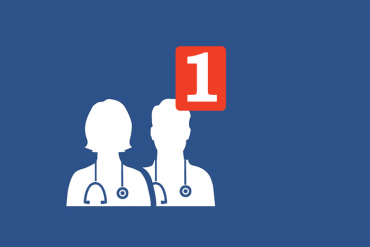 Some of that may eventually change. One group, the American College of Obstetricians and Gynecologists, broke new ground this year in its latest social media guidelines. It declined to advise members against becoming Facebook friends, instead leaving it to physicians to decide.

“If the physician or health care provider trusts the relationships enough … we didn’t feel like it was appropriate to really try to outlaw that,” said Nathaniel DeNicola, an ob-gyn and clinical associate at the University of Pennsylvania, who helped write the ACOG guidelines.

But even the use of these professional pages raises questions: How secure are these forums for talking about often sensitive health information? When does using one complicate the doctor-patient relationship? Where should boundaries be drawn?

For patients, connecting with a physician’s office or group practice on Facebook can be a simple way to keep up with basic health news. It’s not unlike following a favorite sports team, your child’s middle school or the local grocery store.

One Texas-based obstetrics and gynecology practice, for instance, uses a public Facebook page to share tips about pregnancy and childcare, with posts ranging from suggestions on how to stay cool in the summer to new research on effective exercise for post-birth weight gain. Practices have also been known to share healthy recipes, medical research news, and scheduling details for the flu shot season.

“I have people come up to me and say, ‘I follow you on Facebook — thank you for posting this particular article. It helped me and my husband and my family,’” said Lisa Shaver, a primary care physician based in Portland, Ore.

But unless they’re already friends, she won’t add patients to her personal account — where, she said, she posts less health information and more cat videos.

Historically, professional groups including the American College of Physicians and American Academy of Family Physicians have advised against communicating through personal Facebook pages. The American Medical Association notes social media can be a valuable way to spread health information, but urged doctors in its 2010 guidelines  to separate their personal and professional online identities to “maintain professional boundaries.”

Finding ways to use Facebook and other forms of social media to connect with patients — even if it may just be through professional pages — fits a trend in which patients seek more equal footing with their doctors, said Zack Berger, an assistant professor of medicine at the Johns Hopkins School of Medicine who studies patient-doctor relationships and social media. It also follows what James Colbert, a hospitalist at Massachusetts-based Newton Wellesley Hospital, described as the growing consumer approach to medicine — including the notion that patients should be able to reach their physicians at all hours. Colbert is also an instructor at Harvard Medical School who researches how patients want to fit social technology into their health care.

Email can be particularly convenient method, though it isn’t without concerns. Eva Schweber, 44, emails her doctor from a personal account and sends messages through an online portal — a more digitally secure system that is being adopted by a growing number of practices. The portal, she said, is for discussing complex, specific information. She’ll email her doctor from her personal email for less private concerns: scheduling, filling prescriptions and asking if certain symptoms might warrant a check-up.

“The unsecure email is easier, in that I can do it from my phone, my tablet, whatever,” said Schweber, of Portland, Ore.

In a recent study published in the Journal of General Internal Medicine, almost 20 percent of patient respondents reported trying to contact doctors through Facebook, and almost 40 percent through email. “Patients want to communicate with doctors [in whatever way] is convenient,” said Joy Lee, a postdoctoral research fellow at the Johns Hopkins Bloomberg School of Public Health, and the study’s lead author.

Doctors don’t yet seem to share that enthusiasm, Colbert said.

Social networking platforms aren’t usually digitally encrypted, increasing the odds they could get hacked or shared with third parties. The same worries hold true for other, casual forms of online communication such as email and text-messaging.

That means doctors who discuss specific health concerns with patients through those could break the Health Insurance Portability and Accountability Act, the patient privacy law.

“Those concerns are always going to be there,” said David Fleming, past president of the American College of Physicians. “How private is it when we share, when we talk to people? … Once I’ve written it or once I’ve emailed it, it’s gone, and I have no control.”

But because HIPAA was written before email and social media’s ascent, it may not address patient preferences or behavior, Colbert said. With more patients becoming comfortable using personal accounts for health needs, he said, the law perhaps deserves another look.

“Should we allow patients to be able to share or send messages without going through these privacy safeguards if they’re willing to do so? Or do we say that that’s not safe and even if patients don’t care about privacy we need to protect them,” he said. “That’s an open question.”

That public nature is a real worry for patients like Katie Cardenas, 45, who lives in Garner, N.C. She doesn’t think Facebook is secure enough for personal medical details. For sensitive information, she’ll usually send messages through a patient portal, the more secure website her doctor’s practice has set up.

Doctors could address that, several said, by using social media in other ways. These include maintaining active Twitter presences and professional Facebook pages for less-tailored health tips. That way, patients can get useful information and a sense of their doctors as people, but privacy stays intact and physicians maintain distance.

At the Minnesota-based St. Cloud Medical Group, patients can follow a public page. Doctors who are part of the practice post updates with safety tips and seasonal health reminders, or use the page to coordinate and publicize small projects, such as a week-long initiative geared to reducing children’s screen time.

Julie Anderson, a family physician who is also part of the practice, sees the value in this option, but doesn’t personally befriend patients on Facebook. Beyond patient privacy, she said, she fears blurring her personal and professional lives, or patients using that access to seek extra care when she’s off the clock.

“I’ve known colleagues that have friended somebody and have had inappropriate questions asked online, in terms of kind of abusing service,” she said. “Or abusing that … Facebook friendship, where they’re asking medical advice and you’re not even their physician.”