This story is part of a partnership that includes Capital Public Radio, NPR and Kaiser Health News. It can be republished for free. (details) 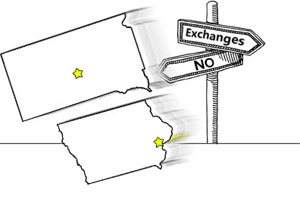 You may guess a state in the Deep South where political opposition to the law is fierce. Or maybe Missouri? It passed a state law saying consumer advisors funded by the Affordable Care Act aren’t allowed to advise consumers.

In fact, Iowa and South Dakota are the two states where the ACA insurance marketplaces struggled the most. In both, just 11.1 percent of residents eligible for subsidized insurance signed up for it – the lowest rates in all 50 states and the District of Columbia, according to data from the Kaiser Family Foundation. (KHN is an editorially independent program of the foundation.)

What happened in Iowa and South Dakota? The answer lies in commerce, not politics. The individual insurance market in both states is dominated by one insurer, Wellmark Blue Cross and Blue Shield. The company chose not to sell on the ACA exchanges in the first year, locking its consumers out from buying subsidized plans from the company. And it is staying out of the Iowa and South Dakota exchanges for Year 2.

So it’s a tough choice for consumers. If they make under 400 percent of poverty, they can get federal subsidies for coverage, but only if they buy on the exchange.

Before last year’s enrollment, Wellmark had 87 percent of the individual market in Iowa and 73 percent of South Dakota’s market.

“It makes the exchange less attractive if a dominant insurer’s policies aren’t available there,” says Larry Levitt, a senior vice president of KFF.

Levitt says the lack of “marketing muscle” from such a big player as Wellmark depressed exchange enrollment in those states in 2014.

“There are a lot of people out there who are eligible for help who aren’t getting it,” he says, adding that enrollment in those two states would probably get a boost if Wellmark joined the exchange.

The insurance company says selling through healthcare.gov could lead to technical problems and data discrepancies in the enrollment process. Wellmark says that could affect consumer subsidies and eligibility.

“How data is transferred between the system, government entities and ultimately, health insurers continues to be problematic,” Wellmark spokeswoman Traci McBee writes in an email. “Because we rely on this information to serve our members, we need to ensure the information we receive is timely, secure and accurate.”

Levitt says data discrepancies do complicate business for insurers, but he doesn’t think that would be the overriding factor for the insurer. “There are certainly many insurance companies that have been able to manage that process so far,” he says.

Wellmark says despite not selling on the exchange in 2014, it sold more ACA-compliant plans through its website and insurance agents than any of their competitors did in the two states.

Cliff Gold, chief operating officer of CoOportunity Health, says its Iowa enrollees are “decidedly older and less healthy” than its policyholders in Nebraska, and that’s partly because Wellmark decided not to join the exchange.

“If one wanted to cleanse their risk pool, there is no better way to do it than to stay off the exchange where presumably lower-income, less healthy people would come on,” says Gold.

Gold says Wellmark’s decision to allow Iowans to renew non-ACA-compliant plans was the other major factor.

“It keeps a lot of people out of the open market,” says Gold. “All of the old plans have medically underwritten people in them, so they’re healthier than average risk pools.”

Medical underwriting was the process that insurers used to exclude people with pre-existing conditions before the Affordable Care Act. Consumers would have to fill out detailed health history forms, and if an insurer didn’t want to take on the risk of someone who had high cholesterol or back pain, it didn’t have to. Insurers can’t do that anymore under the health law, but they can work to keep customers they already have – and have already screened.

CoOportunity Health has proposed a 14.3 percent premium rate increase for 2015, which Gold says, is double what it would have proposed had Wellmark canceled its non-ACA compliant policies and entered the exchange.

Its competitor in the exchange, Coventry Health Care of Iowa, says its decisions are not swayed by what Wellmark does. The company’s president is committed to selling through the exchange in the future. It has proposed an 8.7 percent average premium increase for its plan holders in 2015

Iowa’s Insurance Commissioner, Nick Gerhart says he and the governor of Iowa encouraged Wellmark to participate in the exchange, but Wellmark decided not to.

“We really don’t interfere with those types of decisions,” Gerhart says. “[Wellmark] made their decision and we have to respect that.”

But Gold says Iowans may be paying more for health coverage in the current marketplace as a result – whether it be people in grandfathered plans who aren’t getting cheaper coverage through the exchange, or CoOportunity Health planholders who will pay a higher rate next year.

KFF’s Larry Levitt says while Wellmark may have the “luxury” of choosing their marketplace this year, eventually, the non-ACA compliant plans will expire, and the exchange’s tax credits will attract more customers.

“It’s only a matter of time until they come in,” he says.