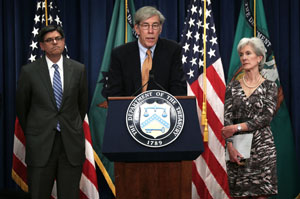 Public Trustee Robert Reischauer (center) speaks as U.S. Secretary of Health and Human Services Kathleen Sebelius (R) and Secretary of Treasury Jacob Lew (L) listen during a news conference on the release of the annual reports from the Boards of Trustees for the Social Security and Medicare trust funds. (Photo by Alex Wong/Getty Images)

They also reported, however, that Social Security’s disability trust fund, which pays monthly benefits to disabled workers and their families, is expected to be exhausted by 2016.  Social Security will begin to run out of money in 2033, nearly the same timeframe as predicted last year.

Spending on Medicare and other entitlement programs remains a flash point in the ongoing debate over federal spending and deficit reduction, but Democrats and Republicans have widely different views of how to strengthen the financing of those programs. Medicare’s six trustees, who include Treasury Secretary Jacob Lew and Health and Human Services Secretary Kathleen Sebelius, urged lawmakers to address the financial challenges of both Medicare and Social Security as soon as possible, an unlikely outcome in the ongoing partisan environment.

Nearly 50 million people are enrolled in Medicare, the health care program for the nation’s elderly and disabled. Enrollment is expected to grow to 80 million by 2030.

The Medicare spending projections also encompass areas of current law that are not likely to remain, such as a 25 percent payment cut for Medicare physician services scheduled to take effect on Jan. 1 that trustees say “is highly unlikely.”

Trustee Robert Reischauer said it would be a mistake to make too much of the two-year extension on the life of the Medicare hospital trust fund. The Medicare projections involved a lot of uncertainty, he said, both on the legislative front — Congress will likely stop the scheduled Medicare physician payment cut, for example — and from the cost impact that new technologies, drugs and medical devices will have.  Those “historically have tended to push up costs,” he said.

Medicare trustees said the improved solvency estimate of the trust fund, which covers Medicare Part A payments for inpatient hospital services and other facilities, was due largely to  lower than expected spending on Medicare services — especially for skilled nursing facilities — and lower projected costs for the Medicare Advantage program, where private insurers provide health benefits to about 27 percent of Medicare enrollees.

The growth of individual beneficiaries’ costs also declined to an historic low of 1.7 percent a year between 2010 and 2012 and is expected to remain lower than the rate of economic growth over the next decade, Sebelius said at a news conference.

She also announced that the lower overall Medicare spending means that premiums for Medicare Part B, which covers physicians visits and other outpatient services, “won’t increase a single dime” in 2014 over their current level of $104.90 a month.

Sebelius and other administration officials said Friday that the 2010 health care law played a major role in the improved Medicare projections. Medicare spending changes in the law include reduced payments to hospitals and other Medicare providers, lower reimbursements to Medicare Advantage plans and efforts to cut program waste.

“With the health care law, our goal was to put the Medicare program on more stable footing,” Sebelius said. “Not by cutting benefits, but by putting reforms in place to ensure that Medicare dollars were spent more wisely.”

Paul Spitalnic, the acting chief actuary for the Centers for Medicare and Medicaid Services, echoed earlier actuarial concerns when he noted a potential problem. Over the long term, he wrote, some of the health law’s changes would cause Medicare payment rates for home health, hospital and other services to drop below those now paid by the Medicaid program, “which have already led to access problems for Medicaid enrollees.”

Mary R. Grealy, president of the industry group Healthcare Leadership Council, said the report’s core message was that the program’s “financial future remains in jeopardy and structural reform is essential.”  But rather than further reduce provider payments, “Congress needs to move forward with improvements that drive greater value and cost containment by investing Medicare beneficiaries with greater powers of consumer choice,” she said in a statement.