When you head to the emergency room, you almost expect stress — the long waits, the hubbub of other patients and the endless, seemingly discombobulated stream of doctors and nurses.

But for patients with autism, a neurological disorder that affects communication and can make people sensitive to stimulation, that stress can be so overwhelming that it undermines their ability to get the treatment they need.

That’s why a small but growing number of hospital ERs across the country are implementing accommodations for these patients, hoping to improve the quality of care they provide while also adding efficiency.

“There’s a growing need,” said Fareed Fareed, medical director of the emergency department at HealthAlliance Hospital in Kingston, New York. “It’s ensuring you’re meeting the needs of a segment of the population.”

The changes can range from better training, to cosmetic adjustments — offering calming objects like toys and iPads, or sending patients to separate, quieter waiting rooms and using dimmer lighting — to capital projects, like building new rooms specifically for autistic patients.

Some facilities also are revamping their treatment protocols. For instance, at the Nemours Children’s Hospital emergency department in Orlando, Fla., parents are asked if their child has autism. If the answer is yes, staffers designate the child specifically, performing any procedures in a room reserved for autistic patients. That way, doctors know in advance they’ll have to adapt — maybe using drawings to help patients describe how they feel, or physically showing them when they need to get on a scale. If patients prefer to write their feelings, not talk, doctors will work with that.

The effort began with children’s hospitals in places like New Jersey and Washington, D.C. More recently, facilities in New York and Pennsylvania that treat patients of all ages are pursuing similar adjustments, as are hospitals in Indiana, Florida and South Carolina, among others. In some cases, after these kinds of steps have been taken in the ER, similar accommodations have been made in other parts of the facility, such as the radiology department or the operating room.

Part of the transition is because demand is growing, so there’s incentive for providers to figure out how best to care for autistic patients. According to the Centers for Disease Control and Prevention, 1 in 45 children were diagnosed in 2014, the most recent year for which data is available. In 2000, it was 1 in 150.

Those patients are more likely to use the health system broadly and emergency facilities specifically. Autism is correlated to other conditions — like gastrointestinal disorders and schizophrenia — and sometimes associated with seizure disorders. Research shows children with autism are much more likely to seek mental health treatment in the ER. Meanwhile, the number of adult autistic patients using the emergency department has increased in recent years. And families and doctors have identified the emergency department as particularly deficient in how it serves autistic children.

“People on the [autism] spectrum utilize the health care system more often. They disproportionately are using our services,” said Edward Jauch, director of emergency medicine at the Medical University of South Carolina. From a cost standpoint alone, he said, it makes sense to figure out how to care for them effectively and efficiently. 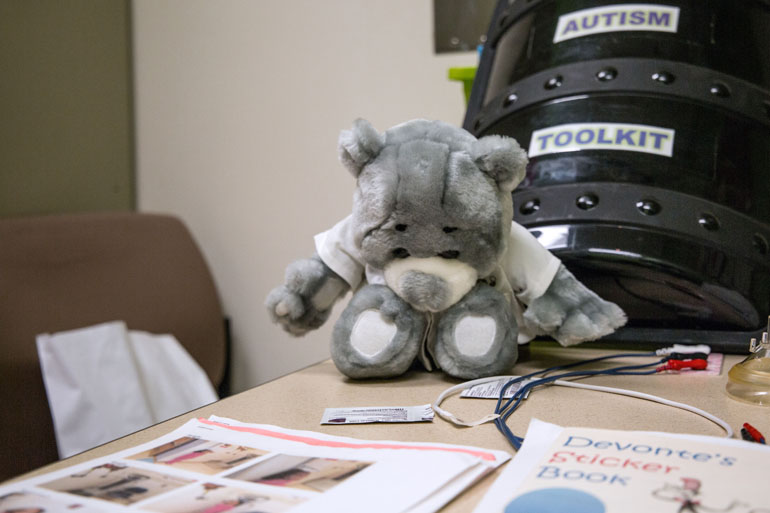 Toys, photo guides and interactive sticker books are some of the tools used at Children’s National to calm patients. For those who struggle with verbal communication, these can offer other ways of understanding what they’re about to undergo. (Francis Ying/KHN)

Plus, ERs think they can grow their customer base. With autism, having special accommodations “attracts patients to our facility,” Fareed said. His emergency department, which mostly serves adults, has been trying to implement autism-friendly practices since 2014.

Put another way: If she had a child with autism, “I would probably drive a further distance” if it meant going to a hospital with better-suited care, said Cara Harwell, the nurse practitioner at Nemours who launched their program.

Training providers in how to communicate with autistic patients is probably most effective, doctors said. Often, it costs little. Arvind Venkat, vice chair for research and faculty academic affairs in the department of emergency medicine at Allegheny General Hospital, in Pittsburgh, has created educational materials he shares with other ERs. The price is roughly $25, or the cost of reproducing materials. For HealthAlliance, Fareed said, training was free, subsidized by the advocacy group Autism Speaks.

Venkat says his interest in helping the ER staff be better prepared comes from his own first-hand experience — he has two relatives with children on the spectrum. That made him aware of the challenges they face navigating the health system.

Meanwhile, Jauch’s 21 year-old son has autism and frequently required emergency care as a child. So Jauch would often speak to emergency departments about the disorder. He has for years brought his son into work, so his residents can learn how to interact with someone with autism, and “not when they’re in a moment of crisis.”

Even small cultural changes can make a difference — like encouraging doctors to work calmly with patients, who might react negatively to a fast-paced environment.

“You can adapt your protocol without changing drastically,” said Joann Migyanka, an associate professor at Indiana University of Pennsylvania, who works with Venkat on training. “Some of it is slow down. That’s difficult in an emergency department but … if you slow down a bit, and give them a bit of time, in the long run, you will save time.”

If these changes work, advocates say, they could pay off in other ways. Of autistic children who use the emergency department, almost 1 in 4 are sedated or restrained to keep calm. But if giving a squishy toy achieves the same effect, hospitals can drive down the cost of care, patients don’t need to be medicated and they might be more receptive to treatment.

Fareed recalled a boy with finger burns, who was scared and hesitant to be touched. Giving him an iPad and a pinwheel helped calm him down.

“He was instantly more relaxed — not as guarded,” he said. “It was much easier to examine his fingers and treat the burn.”

There’s no research yet on how effective these changes are — whether they do, for instance, make patients healthier. So far, it seems even small changes go a long way, Venkat said.

If emergency rooms can demonstrate these changes are worthwhile — that they improve a patient’s perception of the hospital and improve care — that could spur more to adopt them, said Todd Glass, chief of emergency medicine at Nemours.

“Anecdotally, they are improving patient experience, and the likelihood is they’re reducing patient harm,” Venkat said.

That’s what Bella Montalvo, 41, of Orlando, Fla., says. She has a 10 year-old-son with autism whom she’s brought into the Nemours emergency department numerous times over the years. Her son has a high tolerance for pain and can’t articulate how severe it is or where, precisely, it’s located.

Knowing there’s a special waiting room with calming toys and her son’s favorite TV shows, she said, is a huge relief. “It was a weight that had been lifted off my shoulders.”

Plus, the doctors are more knowledgeable about her son’s needs.

Slowing Down The ER To Improve Care For Patients With Autism