Since first lady Michelle Obama made childhood obesity her signature project almost two years ago, the issue has had the kind of highly visible national leadership that it previously lacked.

Something more ambitious is needed, they argue — something more like the anti-tobacco movement.
The similarities between the two public health challenges are compelling. Tobacco use is the nation’s No. 1 cause of preventable deaths in the U.S., killing 467,000 people in 2005, according to a landmark study by Harvard University researchers. Being obese or overweight caused an estimated 216,000 deaths from heart disease, diabetes and other conditions, researchers estimated, while another 191,000 deaths resulted from being physically inactive – another key contributor to expanding waistlines.

In terms of health care costs, obesity is now the larger concern, accounting for $147 billion to $190 billion in yearly expenditures, compared to $96 billion for tobacco.

After decades of lawsuits, damning reports about industry practices, and stop-smoking campaigns, smoking rates have plummeted, from a high of 42 percent of adults in 1965 — a year after the first Surgeon General’s report on smoking and health — to just over 19 percent today. Meanwhile, obesity has been soaring since the 1980s and only last year reached a plateau, which experts say may be only temporary. Currently, 45 million American adults are smokers, while 78 million adults and almost 13 million youngsters are counted as obese.

“When I look at what’s going on with obesity, it reminds me of what was going on with tobacco in the 50s, 60s, and 70s, when there was a lot of emphasis on personal responsibility, voluntary self-regulation, and trying to make safe cigarettes,” said Stanton Glantz, director of the Center for Tobacco Control Research and Education at the University of California, San Francisco.

That approach didn’t work, and efforts to reduce smoking didn’t really have much success until advocates shifted their emphasis from changing individual behavior to community-based activism and holding cigarette manufacturers accountable for harmful products, Glantz said.

A similar shift is needed today in the fight against America’s expanding waistlines, many experts believe. Instead of approaching obesity as a personal issue, it needs to be redefined as a community challenge that calls for collective action and wide-ranging policy changes such as more informative food labels, limits on marketing to children, and taxes on unhealthy products, they argue.

But there are many hurdles. The scope of the obesity problem is much larger than tobacco ever was: it touches on the food we eat, the beverages we drink, the amount of television we watch, how much we exercise, the way our cities are designed, and more. While the variety of policy changes proposed are therefore broader, the political will to enact them has not materialized, in part because “people don’t yet perceive a significant personal threat,” said Dr. William Dietz, director of the division of nutrition, physical activity and obesity at the U.S. Centers for Disease Control and Prevention.

The issue will take center stage in the nation’s capitol this coming week, as the Institute of Medicine releases a new report on strategies to combat the obesity epidemic, the U.S. Centers for Disease Control and Prevention hosts a major conference highlighting efforts to control obesity, and HBO prepares to air a four-part documentary on the obesity crisis.

As public health experts committed to stemming obesity study the history of the anti-tobacco movement and look to it for guidance, it is helpful to consider some key similarities and differences between these issues.

Children are central. The vast majority of people who use tobacco take up the habit as teenagers, and one-third of kids who smoke daily will eventually die prematurely of tobacco-related illnesses, according to the Campaign for Tobacco Free Kids.

The health impact of obesity is similar: seriously overweight children are at greater risk of developing a multitude of health problems that can continue through adulthood, including diabetes, liver disease, heart disease, joint problems and asthma, and are more likely to become obese adults, a wide body of research has demonstrated.

Preventing harm to young people is a central goal of both anti-tobacco and anti-obesity campaigns.

“First, let’s protect our children,” said Dr. David Ludwig, a child obesity expert at Harvard Medical School, noting that the calorie-laden foods and drinks that kids consume in abundance “are not just neutral — they actively undermine our health by overwhelming fundamental biological pathways that regulate appetite and body weight and by manipulating dietary preferences that may be difficult to change over a lifetime.”

Changing social norms is the goal. Dr. Jeffrey Koplan, former head of the CDC and vice president for global health at Emory University in Atlanta, remembers smoking a pipe while writing up patient notes at a prestigious New York hospital in the 1970s. (He gave up the habit more than 30 years ago.) 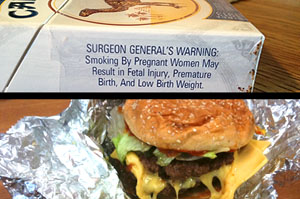 Today, that would be inconceivable: Smoking rates have been cut by more than half, intolerance of smoking in public places is widespread and anti-smoking policies are in place at hospitals, workplaces, and venues across the country.

Koplan is convinced the same shift in social norms is called for — and achievable — when it comes to childhood obesity.  “Our (eating and physical activity) tastes, our preferences and our behaviors are learned and can be changed,” he said. It isn’t going to be easy and it isn’t going to be fast, but “we’re dealing with a population that would like to be thinner and that works in our favor,” he said.

We can’t just say no to food. “Tobacco we can get rid of entirely. We don’t need it. It has no intrinsic value. But we have to eat to live and make terms with food as the enemy,” said Dr. David Katz, director of Yale University’s Prevention Research Center.

That makes curbing childhood obesity a much more complicated issue than tobacco use, Katz and other experts agree. The message to kids and their families can’t be “stop, don’t do this,” which is clear and easy to understand. Instead it has to be “make good choices, do this in moderation, set boundaries,” a message that is considerably more difficult to convey.

Our biology works against us. Throughout most of history, humans lived in an environment where food was scarce and hard to get. As a result, we’re primed, biologically, to eat food when it’s available and “we’re very good at storing calories and defending calories once we’ve got them,” said Dr. Stephen Daniels, chair of the department of pediatrics at the University of Colorado School of Medicine.  “In some ways, you could say that our biology is our own worst enemy when it comes to being overweight or obese.”

While smoking is highly addictive, the biological responses attached to eating food are even more deeply rooted in human evolution, Katz and other experts said.

A sense of shame and denial is greater. People’s self-image is intimately associated with their body weight in a way that isn’t true of smoking.

“When you talk to kids who are excessively heavy and break through their protective shells, what you find is that they feel terrible about their weight — they feel in many ways that they’ve failed,” Daniels said.

“Obesity is seen as a pejorative term that people don’t connect with. They think ‘I’m just 30 or 40 pounds overweight, but I’m not obese,'” said Dietz of the CDC. That suggests the entire way of talking about the issue may need be reframed before personal and social change becomes possible, he suggested.

The variety of products is larger. Tobacco is a single substance, with a limited set of companies that produce cigarettes and related products.

By contrast, the food and beverage industry is enormous and makes a huge array of goods that extend into every home, restaurant, convenience store, and grocery store in America. “That makes the [struggle against childhood obesity] much more difficult than the fight against tobacco,” Dietz said.

There is no second-hand smoke equivalent. The American public was alarmed when it learned that the cigarette smoke non-smokers breathed in airplanes, bars and restaurants was dangerous, and that no amount of second-hand smoke was safe.

“The notion that my behavior as a smoker can have an effect on you and can make you sick was critically important in accelerating people’s intolerance of smoking and their willingness to see the government take action,” said Michael Eriksen, director of the Institute of Public Health at Georgia State University.

There is no equivalent in the fight against obesity.  “Your being obese does not affect me in the same direct way,” Eriksen said.

The best argument might be that obesity consumes enormous health care resources, driving up the cost of medical care for everyone, suggested Dr. Robert Lustig, a professor of pediatrics and director of the Weight Assessment for Teen and Child Health Program at the University of California, San Francisco. But others think that is too abstract and will never yield the same sense of personal outrage that the second-hand smoke issue created.

The role of industry is less clear. In the anti-tobacco fight, tobacco companies were painted as an enemy willing to lie and manipulate the American public for the sake of profits. In turn, the demonization of Big Tobacco — made possible by bitterly fought lawsuits and the release of thousands of company documents — cultivated a common sense of threat.

By contrast, public health advocates aren’t willing to turn food and beverage into enemies in the fight against obesity.

“With obesity (as compared to tobacco), there’s a much more nuanced relationship with industry,” said Dr. James S. Marks, director of the health group at the Robert Wood Johnson Foundation. Food and beverage manufacturers, restaurants, and grocery stores all have a vital role to play in making healthier food more widely available, he noted.

“We can’t regulate our way out of this,” said Jeff Levi, executive director of the Trust for America’s Health.  “We need to work with industry cooperatively to help change consumers’ tastes and habits.”

Others are much less certain that the food and beverage industry can be trusted to be helpful partners.

“Some companies are making huge profits off obesity,” said Stan Dorn, a senior fellow at the Urban Institute, a public policy research center in Washington, D.C., “and I worry that people who are focused on anti-obesity strategies aren’t being tough enough on them.”

War On Smoking Offers Some Lessons For Obesity Fight