In 1998, big tobacco companies settled a landmark lawsuit and agreed to pay states $246 billion over 25 years for smoking prevention efforts.  Fourteen years later – with smoking still the country’s leading cause of preventable death – most states use only a fraction of the money for its intended purpose. 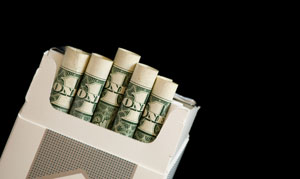 An annual report found that less than 2 percent of the $25.7 billion collected by states this year from the tobacco settlement and tobacco taxes will be spent on prevention and cessation programs, including those for kids.  Only two states – Alaska and North Dakota – met the U.S. Centers for Disease Control and Prevention standards on funding for the issue, which are based on population among other factors.

“We know the problem, we know the solution, we know the public supports this – our policymakers are not listening, and it’s costing us taxpayer dollars,” said Danny McGoldrick, vice president of research at the Campaign for Tobacco-Free Kids, one advocacy group behind the report.

McGoldrick said state governments were using money allotted for tobacco cessation to balance budgets or fund other issues at the expense of a costly public health problem. That comes even though studies have shown that prevention campaigns can pay off. According to a December 2011 study in the American Journal of Public Health, Washington state saved more than $5 in health care costs for every $1 spent on tobacco prevention between 2000 and 2009.

While more than 30 states have implemented initiatives such as  smoke-free workplaces and restaurants, others, including North Carolina, Maryland and Maine, significantly cut what the report called effective tobacco prevention programs in recent years.

“States are pleading poverty, but that’s not an excuse here,” McGoldrick said. “This makes sense from a cost standpoint too.”