In the run-up to the midterm elections, the soda industry has poured millions of dollars into fighting taxes on sugary drinks, an increasingly popular approach to combating obesity, which affects 40 percent of American adults.

Soda makers have campaigned against sugary drink taxes in dozens of cities in recent years, mostly successfully. But after a string of recent defeats, the industry is now pushing statewide measures billed as grocery tax bans that strip cities and towns of their ability to tax soda. Two of these state initiatives are on the ballot Tuesday in Washington and Oregon.

Arizona and Michigan already ban localities from enacting soda taxes. In California, where four cities have soda taxes, the beverage industry pressured lawmakers this summer into accepting a 12-year moratorium on local taxes on sugar-sweetened drinks. Some California lawmakers said they felt they were “held hostage” by the soda industry, which spent $7 million on a ballot initiative that would have made it much harder for cities to raise taxes of any kind. The beverage industry dropped the initiative after lawmakers agreed to the moratorium.

Soda makers also have cultivated close relationships with doctors, scientists and professional societies, including the Obesity Society and the Academy of Nutrition and Dietetics. Both groups say there’s not enough evidence to know if sugar taxes are effective.

Public health advocates say Big Soda is following a script perfected by the tobacco companies, which denied that their products were harmful and funded research that cast doubt on scientific studies while forcefully resisting taxes and regulations. Tobacco companies used their lobbying clout to persuade state lawmakers to prevent cities and counties from passing smoke-free ordinances. In 2006, 21 states pre-empted local smoke-free laws, according to Americans for Nonsmokers’ Rights. Even today, 13 states have some sort of ban on local smoke-free laws.

“There are definitely parallels with the tobacco industry,” said Betsy Janes, an activist with the American Cancer Society Cancer Action Network. Soda makers “are happy to take a page from their playbook.”

Most public health advocates describe soda taxes as a proven way to reduce Americans’ consumption of added sugars, which have been linked to 40,000 deaths from heart disease every year. A study published last year in PLOS One projects that Mexico’s soda tax will prevent up to 134,000 cases of diabetes by 2030. In Philadelphia, sales of sweetened beverages fell 57 percent after a city tax of 1.5 cents per ounce took effect, according to a 2017 study.

PepsiCo, one of the largest soda companies, did not respond to calls or emails. Coca-Cola declined to comment on the issue, referring all questions to the American Beverage Association, which represents the soda industry. William Dermody, a spokesman for the beverage association, declined to comment on the comparison with Big Tobacco. But Dermody said the soda industry supports “keeping food and beverages affordable” and is “standing up for small business and working families” by supporting the ballot measures. Taxes on soda and other groceries “are harmful; they raise prices and they cost jobs,” he said.

In Washington, basic groceries are exempt from sales taxes, said state Sen. Reuven Carlyle, a Seattle Democrat opposed to the initiative. “In 41 years, there hasn’t been one bill to tax groceries,” Carlyle said. The beverage industry “is retaliating against our state” because of Seattle’s soda tax.

Matthew Myers, of the Campaign for Tobacco-Free Kids, said the tobacco industry has long allied itself with anti-tax and pro-business groups, which have helped it fend off cigarette taxes. The tobacco industry fought smoke-free laws by warning that they would drive customers away from restaurants and bars. In fact, the Centers for Disease Control and Prevention reports that smoking bans increase business at bars and restaurants because customers enjoy clean air. Similarly, research shows that Philadelphia’s sugary drink tax hasn’t hurt business, Myers said. Although sales of sugary drinks have fallen, overall business at chain stores hasn’t suffered, according to a 2017 study. A study of a soda tax in Berkeley, Calif., found similar results, with residents buying less soda but more bottled water.

Public health groups said they aren’t giving up on soda taxes. In California, the state dental and medical associations have filed a ballot measure for 2020 to create a statewide tax on sugary drinks. 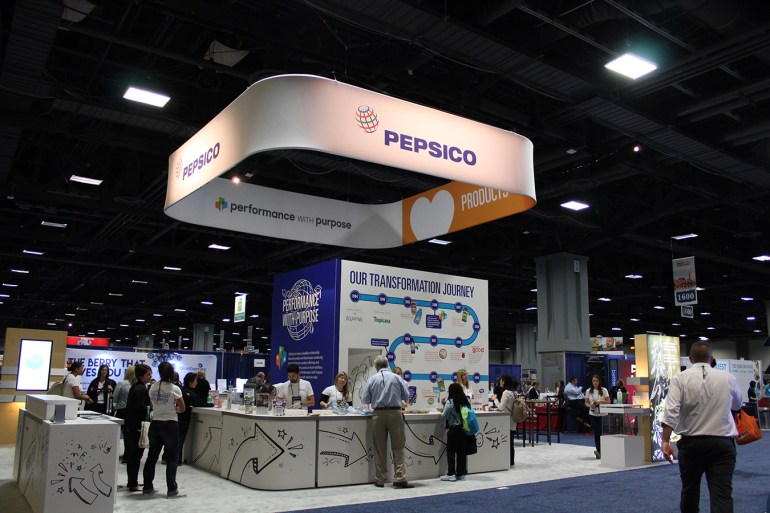 Two of the largest exhibits at the October meeting of the Academy of Nutrition and Dietetics belonged to PepsiCo and Ocean Spray, both of which sell sweetened drinks. Unlike other health groups, which support taxes on sugary drinks, the academy says there’s not enough evidence to know whether these measures improve health.(Liz Szabo/KHN) 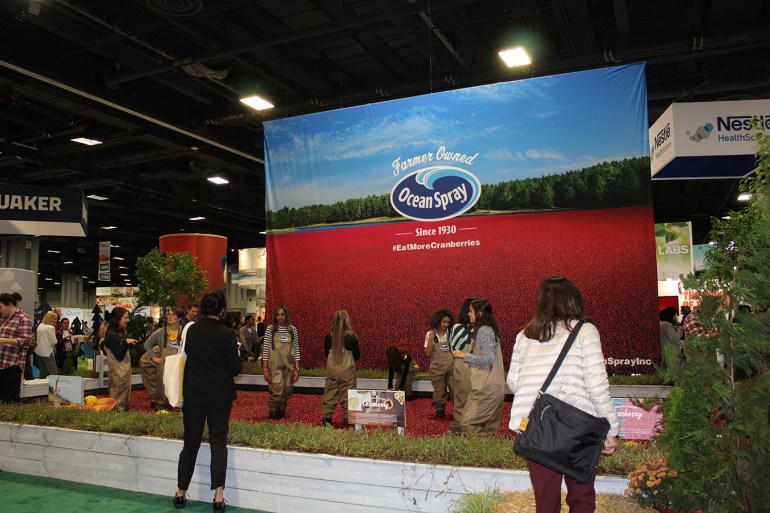 At Ocean Spray’s booth at the October meeting of the Academy of Nutrition and Dietetics in Washington, dietitians could don waterproof overalls and pose for selfies in an artificial cranberry bog. (Liz Szabo/KHN)

A Show Of Force

Soda makers have plenty of money for a fight. The food and beverage industry spends $22.3 million a year on lobbying, including $5.4 million by Coca-Cola. That’s more than the tobacco industry, which spends $16.7 million on lobbying, according to OpenSecrets.org.

The tobacco industry spent decades funneling money into research that made cigarettes look less harmful than they really were, Myers said. Beverage companies also have tried to win over scientists and medical societies by funding research, said Marion Nestle, an emeritus professor of nutrition, food studies and public health at New York University and author of “Unsavory Truth: How Food Companies Skew the Science of What We Eat.”

Soda industry funding of medical meetings, journals and researchers is ubiquitous. Coca-Cola acknowledges spending $146 million on “well-being related scientific research, partnership and health professional activities” from 2010 through 2017. A 2016 study found that Coca-Cola and PepsiCo funded 95 national medical organizations from 2011 to 2015, while lobbying against 29 public health bills that aimed to reduce soda consumption or improve diet. Coca-Cola funded the publication of 389 articles in 169 journals from 2008 to 2016, according to a study published this year in Public Health Nutrition.

Nestle said no one should be surprised that industry-funded research tends to absolve soda from any role in causing obesity. Beverage industry research typically shifts the blame for obesity onto inactivity and “energy balance,” suggesting that exercise is far more important to weight loss than cutting back on sugar and calories, she said.

Yet independent researchers have found “quite compelling” evidence linking sugary drinks to obesity, heart disease and diabetes, said Dr. Frank Hu, chair of the nutrition department at the Harvard T.H. Chan School of Public Health. The CDC notes that sodas are among the largest sources of added sugar in the American diet. A 12-ounce can of Coke contains 9 1/3 teaspoons of sugar; the American Heart Association recommends that women consume no more than six teaspoons of sugar a day, and that men limit themselves to nine.

Dermody questioned the link between sugary drinks and obesity. Obesity has increased steadily over the past three decades. Yet in 2015, sales of carbonated soft drinks fell to their lowest level in 30 years, suggesting the obesity epidemic is being driven by something other than soda, Dermody said. He noted that half the soft drinks sold today have no calories. That shows that voluntary industry efforts to reduce sugar and calories in soft drinks are working, and that taxes aren’t needed.

In July, just after California lawmakers approved the moratorium on soda taxes, the Obesity Society, which represents doctors who treat overweight patients, issued a statement saying there’s no proof that such measures will save lives. The Academy of Nutrition and Dietetics, which includes dietitians, has taken a “neutral” stand on soda taxes, noting that “scientific evidence is insufficiently clear.” In a statement similar to positions taken by the beverage industry, the nutrition academy said, “No single food or beverage leads to overweight or obesity when consumed in moderate amounts and within the context of the total diet.”

Both the obesity and nutrition groups have had close relationships with the soda industry. Coca-Cola and PepsiCo were “premier sponsors” of the nutrition academy in 2016, according to the group’s annual report. PepsiCo and Ocean Spray paid for “premium” exhibit booths at the nutrition academy’s national conference in October. Booths that size were priced at nearly $40,000 to $50,000 each.

In October, PepsiCo underwrote a special issue of the Obesity Society’s journal, which was devoted entirely to the science of artificial sweeteners, at a cost of $26,880. Although PepsiCo paid the journal’s publisher for the special issue, part of the money also went to the Obesity Society, said Dr. Steven Heymsfield, the group’s president-elect. The Obesity Society also has nurtured close ties with soda makers through a “food industry engagement council.” Past meetings were chaired by executives of PepsiCo and attended by employees of the Dr Pepper Snapple Group, now known as Keurig Dr Pepper.

Anthony Comuzzie, the Obesity Society’s executive director, said the society has disbanded the food industry council. In an email, Comuzzie denied that the society’s ties to industry have influenced its position on soda taxes. “To imply that the group or society collectively is biased by food companies has no basis in reality,” he said in an email.

The nutrition academy notes that sponsorships make up less than 5 percent of its budget. “Revenue generated from sponsorships has no impact on the Academy’s policymaking or any stance on issues,” the group said in a statement.

Nestle said that the soda industry appears to have bought the nutrition academy’s silence.

“It is shameful that the academy is not strongly supporting public health measures to prevent obesity,” Nestle said. “The academy’s position puts it squarely on the side of the food industry and against public health.”