Catherine Jarett ran into a nasty surprise after she sent a form to Medi-Cal on behalf of her clients. An estate attorney, Jarett was hired by the sons of an elderly Vallejo woman who had died. For more than 20 years, the woman had been enrolled in Medi-Cal, as the state’s Medicaid insurance program for the poor is known.

After Jarett filed the form with Medi-Cal — a death notice as required — the state sent a bill for a hefty $76,349. Jarett was stunned. It was for the cost of health, vision and dental insurance, she said. 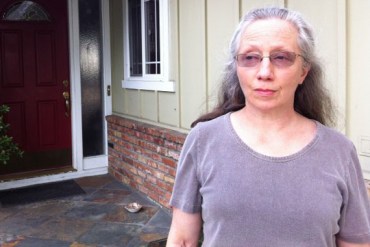 Anne-Louise Vernon from Campbell, Calif. enrolled in Medi-Cal, but then found out the state could use proceeds from her home to recover costs of her health care. (Photo by Pauline Bartolone/Capital Public Radio)

The bill was part of Medi-Cal’s “estate recovery program.” Under a federal law not widely known to consumers, states can seize assets of Medicaid beneficiaries after they die. “I was never aware of this wrinkle that they could recover for health insurance,” Jarett said.

Jarett’s clients did not want to speak to reporters, but Jarett said they insisted their mother had not been to the doctor in years and had even died at home. But Jarett said the charges included a breakdown by month of the state’s payments to a managed care plan as part of Medi-Cal.

While a 1993 federal law mandates that states recover assets for nursing home care, the law makes it optional that states recover for medical services — doctor visits, hospital stays and the like — for people 55 and over. Advocates say just 10 states do this optional recovery, but it isn’t clear that the other states pursue the assets as aggressively as California.

“It’s an awful system, and it needs to be changed. It absolutely needs to be changed,” said Pat McGinnis, executive director of California Advocates for Nursing Home Reform. Her group is sponsoring a bill, SB33, introduced by state Sen. Ed Hernandez (D-West Covina), that would abolish this optional recovery. The bill was heard by the Senate Health Committee on Wednesday and passed out of committee by a vote of 8-0. It will go before the Senate Appropriations committee next.

Last year, a similar bill sailed through the legislature, but was ultimately vetoed by Gov. Jerry Brown. Still, in a statement last September when he vetoed the bill, Brown left an opening. He said estate protection might be a “reasonable policy goal,” but that the cost “needs to be considered alongside other worthwhile policy changes.”

Figuring out that cost is a challenge. In 2013 and 2014, the state recovered $61 million in 3,900 cases, said Carol Sloan with the Department of Health Care Services. But the state does not break down how much of that $61 million is for nursing home care and how much of it is for medical services.

For perspective, $17.8 billion in state general fund dollars went to Medi-Cal last year. The total budget for Medi-Cal is significantly more than that after adding in federal dollars and various taxes— $85.7 billion.

Like the attorney Jarett, Anne-Louise Vernon, 60, of Campbell, had never heard of estate recovery. She had been “so looking forward,” she says, to signing up for insurance under the Affordable Care Act. Her income was too low for her to qualify for subsidies to purchase insurance on the Covered California marketplace. Instead, she qualified for Medi-Cal.

Vernon said she was “leery,” and asked if there were strings attached. “I was told, ‘No, no, it’s completely free.’” She said it was some time later, when she was looking around online, that she found a reference on an FAQ page about assets being seized. She was furious.

Vernon held onto her home years ago after a divorce, but said she was “involuntarily retired” and has been living on savings. She knows she could shelter her home but doesn’t want to take that step. “I’m 60! I’m not going to sign my house over to my kids at this age.”

For other people, attorneys’ fees to take the legal steps to shelter a property are a big issue. “People who end up on Medi-Cal are poor people,” said McGinnis. “They’re the ones that usually cannot afford to pay an attorney $300 to $400 an hour.”

‘Collection Agency for the Feds’

Estate recovery has become a much bigger issue since the rollout of Obamacare started more than a year ago. Under the expansion of Medicaid, people earning up to 138 percent of the federal poverty level are eligible (in states like California that are participating in the expansion). But for those people, 100 percent of the cost of their health coverage is borne by the federal government for the first three years, drifting down to 90 percent after that, and any recovered money would be returned to the federal government.

“What are we? A collection agency for the feds?” asked McGinnis, who also says CANHR is hearing from consumers who will disenroll from Medi-Cal if the policy has not changed. Other advocates believe the policy is a barrier to enrollment for some people.

For now, Vernon is staying on Medi-Cal. Like 80 percent of Medi-Cal beneficiaries in California, she is enrolled in a managed care plan. When she wanted to know what her Medi-Cal coverage cost, she spent “hours and hours on the phone” calling both her managed care plan and the state, she says, and got the runaround from both of them. No one could tell her what her coverage cost.

Finally, an advocate sent her a link to the exact page on a state website where she could find out how to file a request for information — with a $25 fee. She finally got an answer: $578.71 a month. If she stays on Medi-Cal for another five years until she’s 65, when she becomes eligible for Medicare, the state will have paid almost $35,000 for her managed care premium. After she dies, the state could bill her estate for that amount — or more, if she continues on Medi-Cal.

Ironically, if Vernon, and others like her, earned just a bit more money, they would qualify for heavily subsidized private insurance through the Covered California exchange. The state estimates that the “per member per month” premium for those newly eligible for Medi-Cal is $620.98, or nearly $75,000 over 10 years.

Vernon plugged her age and ZIP code into the Covered California insurance calculator, but increased her income to $17,000 to see what would happen.

Some Face A Big Bill From Medi-Cal — After They Die