An intensive care unit nurse in a small-town hospital on Maryland’s scenic Eastern Shore suspected that a patient had necrotizing fasciitis, the so-called “flesh-eating” disease.

The condition is rare. Even experienced intensive care doctors seldom see it, and, since it was nighttime, no such physician was in the ICU. Pinning down the diagnosis was critical—and in this case Berlin, Md.’s Atlantic General Hospital had back-up. 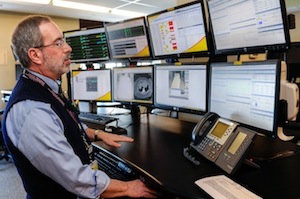 Doctor Marc T. Zubrow, medical director at the University of Maryland Medical System’s eCare, says he can use a bank of monitors to care for up to 100 patients in eight different hospitals all over the state of Maryland. Patients can be visually monitored and their lab tests and medical information are contained on the screens (Photo by Barbara Haddock Taylor/Baltimore Sun).

A critical care doctor 125 miles away was monitoring the patient’s health via voice, video and high-speed data lines constantly streaming information about vital signs, medications, test results and X-rays, a telemedicine service known as Maryland eCare. The physician quickly verified that the patient had the deadly infection and arranged immediate transfer to another hospital with a surgeon who could remove the infected tissue.

Atlantic General is one of Maryland eCare’s six original community hospital clients, which have a total of 72 ICU beds. By the end of the year, the program will go live in three more Eastern Shore hospitals, adding 18 more ICU beds.

Studies have shown that patients do better and leave sooner from ICUs managed by intensivists, another term for critical care doctors. But intensivists are in short supply nationwide, and small community hospitals like Atlantic General have a difficult time recruiting and retaining them, let alone paying their salaries. Connecting intensivists to small ICUs via telemedicine, proponents say, is the next best thing to hiring them.

Telemedicine, the exchange of medical information between sites via electronic communications, is being used not only by ICUs but also by other hospital departments, home health agencies and private doctors’ offices. But skeptics suggest that small ICUs might be able to improve care with less expensive measures. Telemedicine now costs hospitals roughly $40,000 to $50,000 a year for each covered bed. Initially, adaptation of telemedicine in ICUs nationwide was rapid, but a new study suggests it is slowing.

One of Maryland eCare’s 20 intensivists monitors ICU patients from 7 p.m. to 7 a.m. weeknights and for 24 hours on Saturdays and Sundays.  They’re stationed at computers in Maryland eCare’s COR—Central Operations Room—which last year moved from the Christiana Care Health System in Wilmington, Del., to the University of Maryland Medical Center in Baltimore. On weekdays, when the hospitals’ critical care doctors are at work, eCare critical care nurses staff the COR computers. 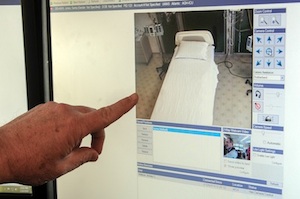 Critical care specialist Atif Zeeshan and another intensivist work in Atlantic General’s ICU from 7 a.m. to 7 p.m. on alternating weeks, and they’re on call 24/7. Zeehan said he was at first leery of telemedicine. Four years after his eight-bed ICU hooked up with Maryland eCare, Zeehan is a believer. “There have been cases where lives were saved with eCare intervention,” he says.

Zeeshan’s initial skepticism isn’t unusual. “Nobody wants to be dictated to,” acknowledges Marc Zubrow, a critical care and lung specialist and eCare Maryland’s medical director. “An absolutely huge part of my job,” says Zubrow, is to “convince the local medical community that this will not negatively impact patient care and might possibly improve patient care.”

Hospital representatives routinely visit the Baltimore COR, and Zubrow and members of his team regularly visit the community hospitals and “get very close with the local bedside people.”

And sometimes to patients’ families.  Zubrow shared an eCare doctor’s notes about an interaction with a patient’s daughter (stripped of information that could identify the patient). The woman, who’d flown in to be at her critically ill mother’s bedside, arrived  around 3 a.m. and spent a few minutes video-chatting with the eCare intensivist on duty.

“I told her that nothing we do medically is going to improve her mother’s condition or meaningfully prolong her life,” according to the doctor’s notes. “I urged her to allow us to focus on treating her mother’s pain and suffering…I offered my support and told her I would speak with her again at any point tonight.”

Telemedicine has helped improve the care of ICU patients says registered nurse Anne Lockhart, who directs the unit at Calvert Memorial. Lockhart says that includes a reduction in the number of patients contracting pneumonia as a result of being on a ventilator.

But Jeremy Kahn is skeptical. An associate professor of critical care, medicine and health policy at the University of Pittsburgh, he says assessing telemedicine’s effectiveness in the ICU is tricky. Comparing mortality rates before and after implementation of telemedicine doesn’t account for the fact that “outcomes in the ICU get better over time, no matter what,” Kahn says.

A better comparison would be to other, less-expensive, measures, such as using more non-physician providers—physician assistants and nurse practitioners—at ICU patients’ bedsides, Kahn said.

While Maryland eCare is adding hospitals, Kahn says adoption of telemedicine in ICUs nationwide is slowing. In a study published online in October by Critical Care Medicine, Kahn and his colleagues found that the number of U.S. hospitals using telemedicine in ICUs increased from 16, or 0.4 percent, in 2003, to 213, or 4.6 percent, in 2010, with usage doubling in the first four years but dropping to average growth of 8.1 percent in the last four.

“In an era of cost constraints, I feel we need to be simultaneously exploring cheaper ways to get the same outcome,” Kahn says. “That’s not to say we should not explore telemedicine.”